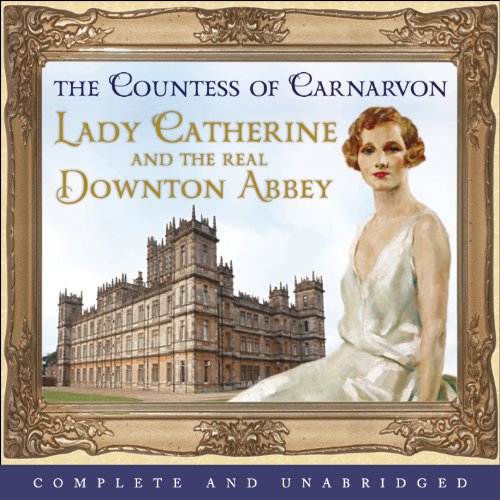 By: The Countess Of Carnarvon
Narrated by: Sandra Duncan,Jenny Ogilvie,Andrew Wincott

Sometimes the facts are even more extraordinary than the fiction...

This book tells the story of Lady Catherine, a beautiful American girl who became the chatelaine of Highclere Castle, the setting for Julian Fellowes' award-winning drama Downton Abbey. Charming and charismatic, Catherine caught the eye of Lord Porchester (or 'Porchey', as he was known) when she was just 20 years old, and wearing a pale yellow dress at a ball. She had already turned down 14 proposals before she eventually married Porchey in 1922. But less than a year later Porchey's father died suddenly, and he became the 6th Earl of Carnarvon, inheriting a title and a Castle that changed both their lives forever.

Catherine found herself suddenly in charge of a small army of household staff, and hosting lavish banquets and weekend house parties. Although the couple were very much in love, considerable challenges lay ahead for Catherine. They were immediately faced with the task of saving Highclere when debts threatened to destroy the estate.

As the 1920s moved to a close, Catherine's adored brother died and she began to lose her husband to the distractions London had to offer. When the Second World War broke out, life at the Castle would never be the same again. Drawing on rich material from the private archives at Highclere, including beautiful period photographs, the current Countess of Carnarvon transports us back to the thrilling and alluring world of the 'real Downton Abbey' and its inhabitants.

I so loved the book about Lady Almina. Maybe Catherine just doesn't hold a candle to her. But the writing was also quite dull - just going through the motions.

Would you ever listen to anything by Countess Of Carnarvon again?

Doubtful, I fear she is just trying to cash in on Downton Abbey regardless of whether the subject is worthy of a book.

What character would you cut from Lady Catherine and the Real Downton Abbey?

Too much general WWII history

I enjoyed it and just hope the Countess can find a new heroine for her next book . A very good listen

Where does Lady Catherine and the Real Downton Abbey rank among all the audiobooks you’ve listened to so far?

Would you be willing to try another book from Countess Of Carnarvon? Why or why not?

As a Downton fan it was interesting to get some of the history as well as enjoying a good narrative.

What a fabulous story this is!

This book could so easily become a television series in its own right,certainly different enough from Downtown Abbey it is interesting and good history value.