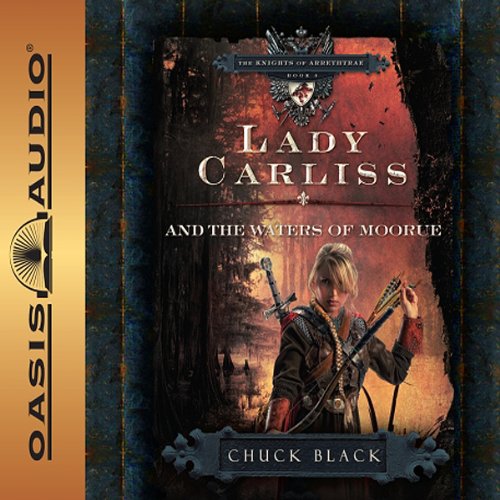 Lady Carliss and the Waters of Moorue

Lady Carliss faces the challenge of her life. Can she save the kingdom before it's too late? Determined, smart, and a master of both the sword and the bow, Lady Carliss has proven herself as a veteran Knight of the Prince. Returning from a mission of aid, Carliss is plunged into adventure once again as she searches for the marauders responsible for kidnapping a friend's family. Along the way she is reunited with Sir Dalton and discovers that the struggle in her heart is far from over. When Dalton falls to the vicious attack of a mysterious, poisonous creature, Carliss finds herself in a race against time. As Dalton clings perilously to life, she must find the antidote in the distant and strange city of Moorue. While there, Carliss uncovers the master plot of a powerful Shadow Warrior that will soon overtake the entire Kingdom. Her faith in the Prince and her courage as a knight are tested as she faces evil Shadow Warriors and a swamp full of dreadful creatures. The lives of many, including Dalton's, depend on Carliss. But she cannot save them all, for time is running out. She faces an impossible choice: save Dalton, or let him die so that others may live.

What listeners say about Lady Carliss and the Waters of Moorue

The best one so far!

This story is absolutely magnificent in its construction and execution. A well crafted story with multiple twists and no conclusion until the very end. Characters return from the previous book and make the story better by all accounts.

Lady Carliss is a knight whose story is worth remembering as much as her friend Sir Dalton and his.

Great read for the whole family!!

We love this book series as well as all books by this author. I'm always in search of good books that teaches and reinforce my shared values. We often have long family conversations after each listen. The audio was well done bringing each character to life.

I think it was a great book!

It had a lot of adventures and the strange creatures in it made it all the more exhilarating! I
I love The Knights of Arrethtrae!

I love how the story has romance and adventure. What I loved the most was how the background music brought the story to life. It is a great story. A little intense but great! : )

Loved every minute of it. Great character development and fantastic narration. very pleased with the added music and sound effects that add more life to the story.

Our family listened to this story on a short vacation, and it kept us all spell bound. It was wonderful! This is the 3rd one in this series we've enjoyed. Thanks :)

I really enjoyed this, good Christian fiction is hard to find. I have devoured this series faster than an other.

If you could sum up Lady Carliss and the Waters of Moorue in three words, what would they be?

The Amazing Allegory and the action throughout the story

Which character – as performed by Andy Turvey and Dawn Marshall – was your favorite?

I don't really have a favorite they were all amazing. Si Kon and Dalton were maybe the best. :)

If your looking for a good inspiring book with lots of action here it is! :)