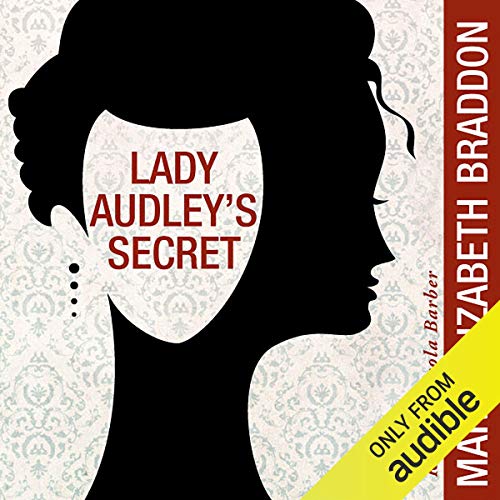 Among the many writers of British Victorian canonical literature, perhaps none were as sensational as Mary Elizabeth Braddon, and certainly no book among her more than 70 popular titles has garnered more acclaim than Lady Audley’s Secret. Unlike most heroines of this period, Lady Audley does not sit idly by and hope things will turn out her way. While other women are waiting for the ideal husband to drop into their laps, she actively pursues the future she desires, much to the chagrin of the men who orbit around her loveliness.

British narrator Nicola Barber does a fine job of letting Braddon’s prose largely speak for itself. She has a firm grasp of accents both high and low class when called upon to get into character dialogue, but is otherwise appropriately content to let Braddon’s dreamlike descriptions unfurl across this somewhat unconventional story. Lucy Graham has become Sir Audley’s wife through not entirely ordinary means, possibly including murder. When Audley’s nephew takes it upon himself to investigate, tensions run increasingly highly and the family begins to fall apart.

But what is the precise nature of Lady Audley’s crime? Will she crack under the pressure of the private investigation, or desperately resolve to preserve her marriage by any means necessary? With a narrative chock full of all the circumstantial evidence and blackmail such a dilemma requires, Barber oscillates keenly between the breathless pace of the plot’s revelations and the lush, more subdued tones of 1860s expository prowess. The lady and the setting are equally vivid thanks to Mary Elizabeth Braddon’s serial practice, and Nicola Barber delivers the goods in a solid style that doesn’t intrude on the quality of the writing. Whether your college Brit Lit professor skipped this book, or whether you just haven’t thought of it in years, it’s time to go back and give Lady Audley’s Secret a listen. —Megan Volpert

This Victorian best seller, along with Braddon's other famous novel Aurora Floyd, established her as the main rival of the master of the sensational novel, Wilkie Collins. A protest against the passive, insipid 19th-century heroine, Lady Audley was described by one critic of the time as "high-strung, full of passion, purpose, and movement." Her crime (the secret of the title) is shown to threaten the apparently respectable middle-class world of Victorian England.

The reader is skilled and pleasing, although some of her pronunciations are very odd. The book, though. . . The first half is all plot and no character, much heavy-handed foreshadowing, pedestrian language. Somewhere just pass the middle I got more caught up in the story and began to enjoy it more. As is the case with many Victorian novels, it is overlong and quite repetitious. Mrs. Braddon is no Dickens, not even a Wilkie Collins, but the book occupies a niche that is not heavily populated with competitors, at least on audio.

So much nineteenth-century fiction left to discover. I'm placing this one near the top. This was a delightful story. Nicole Barber's rendition is pleasant, easy on the ears; she also does a fine job with the characters.

Loved the book and the audio was great to listen to, I loved the variations in voice and it was easy to follow along with

I truly enjoyed every moment in this book: the nature descriptions, characters' inner talks, interactions, and of course, the wonderful ending, which brought tears to my eyes! The narration was superb. I shall listen to this 19th century classic yet again!

I read this book after hearing she was a contemporary of his and wrote stronger female characters. I have to say, I enjoyed his Woman in White and especially the Moonstone so much more. About two months after listening to the Moonstone it was referenced so many times in other books and shows that I was very pleased to have read it here. This was pleasant, however not as engaging as the other author. I have to say the narrator makes a huge difference,

I purchases this story because it was on sale. I don't think this book would be worth a whole credit. I didn't care for the titles of each chapter as they gave too much away. It's a slow moving book but it does have an interesting plot and some surprising parts. The narrator was really good!

A great story line and brilliantly narrated. Just when you think you've worked out Lady Audley's secret there comes a twist.

If you like Victorian meladrama this is a typical book of the genre. I found the book itself entertaining.

But ... the narrater has a dreadful reading style. I foudn that she over dramatised the reading (even considering that it is a meladrama), but more irritating than that were regular audible breaths. I ended up skipping to the end to find out what happened because I couldn't stand the reader. A shame really.

Not all that I had hoped

A better, English narrator is needed, the annoying deep breaths Ms Barber takes, plus the fact she does not know how to read properly and mispronounces simple words like amiable, reconnoitre and clerk

Could you see Lady Audley's Secret being made into a movie or a TV series? Who would the stars be?

There is nothing that cannot be made into a film particularly when 'love' is involved.