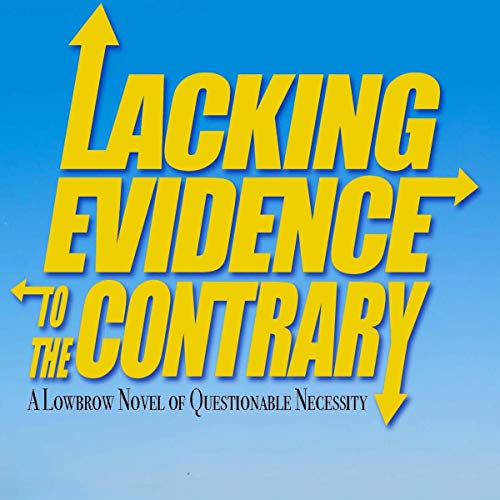 Lacking Evidence to the Contrary

By: Mark A. Henry
Narrated by: Marty Moran

In the thin slice of time between the present day and the dystopian future we've been hearing so much about, Chris Dawkins, a young man of uncertain everything, finds himself in the FBI's crosshairs when he accidentally signs the online Terms and Conditions to join an Islamic extremist group. (And I suppose you read all the fine print?)

With the help of his billionaire boss Jasper Wiles and badass attorney Biz Byner, Chris must thread a narrow path to freedom, squeezing through the colliding worlds of law enforcement, the news media, Silicon Valley, entrepreneurial jihadists, teenage dark web nuclear arms dealers, rogue military officers, street hustlers and side hustlers, living their own truths all.

One part thriller, one part action-adventure, one part buddy comedy and nine parts social and political satire, Lacking Evidence to the Contrary slices, dices and serves up overflowing portions the contradictions and absurdities of a world where nothing is as it seems.

What listeners say about Lacking Evidence to the Contrary

Listener's Note: the Author's notes -in the Author's voice- are perfectly timed and executed! This book is a funny, not so far from home, satire that I can't wait for Oprah to pick for her book of the month! I can't wait for Mark A. Henry to put more electronic ink to the word processor screen!

This comic thriller is spot on in its satire of today's media domination and how it has shaped/reflected (chicken or egg?) today's society. At first I thought the style of this over the top spoof couldn't possibly hold my interest for the duration, but the combination of the author's wit and story telling kept me guessing and entertained to the end.