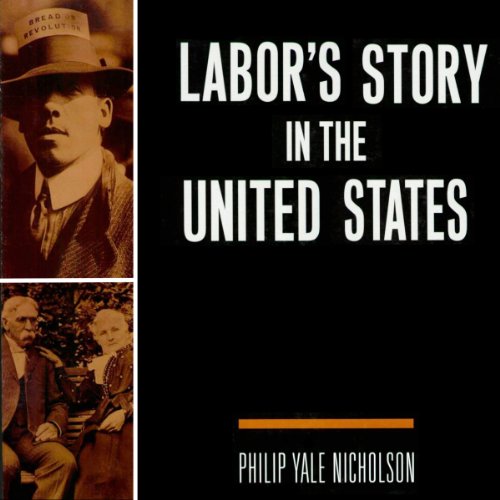 Labor's Story in the United States

In this, the first broad historical overview of labor in the United States in 20 years, Philip Nicholson examines anew the questions, the villains, the heroes, and the issues of work in America. Unlike recent books that have covered labor in the 20th century, Labor's Story in the United States looks at the broad landscape of labor since before the Revolution. In clear, unpretentious language, Philip Yale Nicholson considers American labor history from the perspective of institutions and people: the rise of unions, the struggles over slavery, wages, and child labor, public and private responses to union organizing. Throughout, the audiobook focuses on the integral relationship between the strength of labor and the growth of democracy, painting a vivid picture of the strength of labor movements and how they helped make the United States what it is today. Labor's Story in the United States will become an indispensable source for scholars and students. Author note: Philip Yale Nicholson is Professor of History at Nassau Community College and Adjunct Professor at the Cornell University School of Industrial and Labor Relations, Long Island Extension. He is the author of Who Do We Think We Are? Race and Nation in the Modern World.

“A monumental work that prods us to consider the fate of labor and democracy." ( Labor Studies Journal)
"This is a wonderfully comprehensive narrative of American labor, full of insight and shrewd judgments." (Nelson Lichtenstein, University of California, Santa Barbara, and author of State of the Union: A Century of American Labor)
“Fill[s] a void in labor history by presenting the breadth of its struggles in one highly readable volume." ( Science & Society)

What listeners say about Labor's Story in the United States

If you want a complete history, this accomplishes that. I listened to the audio book and it was like listening to an entire text book.
I am a unionist and this left me feeling quite down-trodden; but, at the same time, since I am a volunteer and not trained or educated in labor relations, this audio book helped to broaden and fill in the gaps in my knowledge. There are not many audio books on this subject to start with. Hope you find this useful. -s.

Sadly in 2004, 13 years ago, the author predicted our current political tragedy and perpetual decline.

this is the book I wish I had read 10 years ago. one of the best audio books in audible. and I am a professional labor historian!

If you turn the speed up to 1.25x and can get past the encyclopedic qualities of this history, it is a worthy listen. The story of the labor movement is not done justice in our schools and the popular myths of our country. So many gaps in my knowledge were filled, and I will surely need to revisit this book to adequately absorb the lessons of the past.