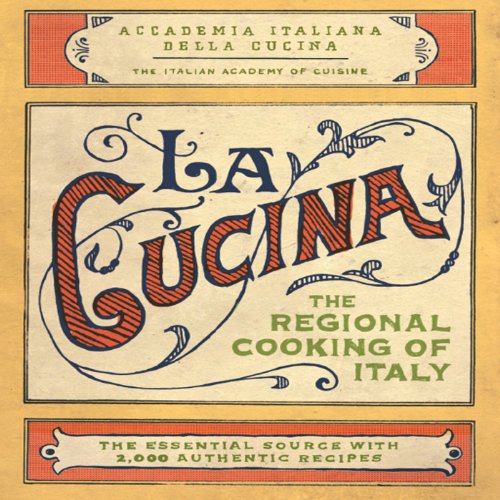 By: Lily Prior
Narrated by: Lisa Passero
Free with 30-day trial

Since childhood, Rosa Fiore - daughter of a sultry Sicilian matriarch and her hapless husband - found solace in her family's kitchen. La Cucina, the heart of the family's lush estate, was a place where generations of Fiore women prepared sumptuous feasts and where the drama of extended family life was played out around the age-old table.

When Rosa was a teenager, her own cooking became the stuff of legend in this small community that takes pride in the bounty of its landscape and the eccentricity of its inhabitants. Rosa's infatuation with culinary arts was rivaled only by her passion for a young man, Bartolomeo, who, unfortunately, belonged to another. After their love affair ended in tragedy, Rosa retreated first into her kitchen and then into solitude, as a librarian in Palermo. There she stayed for decades, growing corpulent on her succulent dishes, resigned to a loveless life.

Then, one day, she meets the mysterious chef, known only is I'Inglese, whose research on the heritage of Sicilian cuisine leads him to Rosa's library, and into her heart. They share one sublime summer of discovery, during which I'lnglese awakens the power of Rosa's sensuality, and together they reach new heights of culinary passion. When I'Inglese suddenly vanishes, Rosa returns home to the farm to grieve for the loss of her second love. In the comfort of familiar surroundings, among her growing family, she discovers the truth about her loved ones and finds her life transformed once more by the magic of her cherished Cucina.

"Succulent saga...with a sensuous tone, a folkloric narrative style and most original set of characters, La Cucina could well satisfy the hungriest of appetites". - (People Magazine)
"Prior cooks up a cinematic yarn full of characters so rich you'll fear they're fattening, but readers will be sure to splurge on this saucy tale chock full of sex, recipes, and murder." - (Publishers Weekly)

What listeners say about La Cucina

This charming story combines cooking and sex in equal portions (okay, just a little more cooking than sex) and is all the better for Lisa Passero's well accented narration -- it's an easy, if not compelling, yarn to listen to and you'll probably be as reluctant as I was to have to hit the pause button occasionally. Highly recommended.

Here we have "Under the Tuscan Sun" meets "The Godfather", meets "Harlquin Romances" meets "Penthouse Forum ". Something for everyone, whether you want it or not. Makes for an interesting listen while in your car with your spouse for 6 hours. The one things we were wondering --- did the author actually taste the "fried calf's brains" recipe she offers in the narrative? She certainly doesn't menton how it tasted. Oh well.

Anyone who understands the place of food in passion and love will get why this is a wonderful book. The reader is fabulous, and the images engendered involved numerous senses and were terrific. I had to restart this before I was really able to hear it, so give it a chance.

Doesn’t talk much about Sicily, more about the old lifestyle in Sicily, she’s much too zealous about murdering poor little animals for food, and much too descriptive for me. I thought I would enjoy it, but I just didn’t. 🙁

OMG... But in a Unexpectedly Good Way...

I am lately interested in books that melt the rich culture of cooking, food, etc., into the souls of their stories. I did a random search and La Cucina showed up on a list. I read the summary, downloaded the book and...WOW! What I mean is that I did not expect what I got...HOWEVER, it was a breath of fresh air. I felt like I was reading some seedy version of Strega Nona (one of my kids' favorite books, by Tomie dePaola)! It has an old world fairy tale feel to it, but is hilariously detailed and very adult, if you know what I mean...wink, wink. The experience is very unique and heart lifting; I found myself surprised into shocked gasps and laughing out loud at many points throughout. The narration was perfect and the ending sweet.

As for my interest, after making my disappointed way through other books who claimed to incorporate the culinary arts, this one really had what I was looking for. Rosa Fiore's calling as a cook is very much part of who she is. It is interesting that, despite this, Prior has her earn her living as a librarian the majority of the story. This seemed to me to drive the point that cooking was part of Rosa, like her arm or part of her heart, her brain. It wasn't a job. La Cucina is a character itself. Most of the monumental events in the story, and indeed in Rosa's life happen in La Cucina. It is her birth place, the place her family mourns their deaths, a place of contemplation and of refuge. It is the beginning and the end of the story. This novel is altogether obscene and yet completely wholesome. I loved every delectable word!

It's not really about cooking or Italy

This book is really about a person's sexual awaking. Sicily and cooking are a backdrop. Everyone except the main character is Uni-dimensional, which makes it hard to get into the book.There really aren't any subplots or intricacies. I was interested to keep reading to see what happened to the main character, and the main character is interesting. However, the book would be so much better if it were more layered.

Would you ever listen to anything by Lily Prior again?

Fabulous rich and complex yet simple story of cooking and lovemaking

This story filled my imagination and held me enthralled from start to finish. not for children.

You will never think of tomato sauce the same way

This is a very entertaining book. We all know that our senses of smell and taste are powerful, We also know that food is a primal urge. Finally, we know that sex is a powerful emotion. Now all come together in a book about Sicily, people, and food. A very entertaining read that will leave you wanting more...you just have to devide more of which!

It's not often that I finish an audio book and search madly for another one by the same author!

I didnt want this story to end, the descriptive nature of this book is "delicious" very "saucy" in lots of ways!! It will leave you licking your lips at the thought of all that wonderful food!

Highly recommended, wish I could find more of a similar nature.