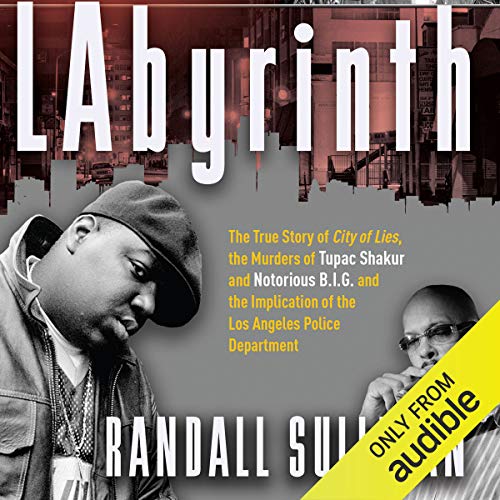 The True Story of City of Lies, the Murders of Tupac Shakur and Notorious B.I.G. and the Implication of the Los Angeles Police Department
By: Randall Sullivan
Narrated by: Kevin Free
Length: 10 hrs
Categories: Non-fiction, True Crime
5 out of 5 stars 5.0 (4 ratings)

Acclaimed journalist Randall Sullivan follows Russell Poole, a highly decorated LAPD detective who in 1997 was called to investigate a controversial cop-on-cop shooting, eventually to discover that the officer killed was tied to Marion “Suge” Knight’s notorious gangsta rap label, Death Row Records. During his investigation, Poole came to realize that a growing cadre of black officers were allied not only with Death Row, but with the murderous Bloods street gang. And incredibly, Poole began to uncover evidence that at least some of these “gangsta cops” may have been involved in the murders of rap superstars Notorious B.I.G. and Tupac Shakur.

Igniting a firestorm of controversy in the music industry and the Los Angeles media, the hardcover publication of LAbyrinth helped to prompt two lawsuits against the LAPD (one brought by the widow and mother of Notorious B.I.G., the other brought by Poole himself) that may finally bring this story completely out of the shadows.

What listeners say about LAbyrinth

I was excited to get this audio book. I'm a big fan of hip hop and wanted to hear the perspective of an investigator who investigated the death of Notorious BIG. Instead I got a book about how black police officers were too dumb to pass a police exam and only got promoted because of their race. And how white police officers were the victims of false claims of racism. The author also claims white liberals are only critical of police because they don't know how violent black people are. The author returns to this point several times.

He writes extensively about the righteousness and well intentions of white police in Los Angels while never mentioning any of the proven cases of police brutality and race based harrassment by white officers. The only criticism he ever gives law enforcement is on black officers. He specifically singles them out as corrupt.

If you can get past all the offensive racist stuff and make it to the parts where he discusses the investigation of the murders of Biggie and Tupac then you'll see many inaccuracies. Suge Knight was never a drug dealer and didn't claim membership into a gang until he left college. He even misquoted Maxine Waters suggesting she defended his criminal activities, which she never did.

If you want to learn more about the murders of two of hip hop's biggest stars Biggie and Tupac, this is not the book for you. I suggest you try one of the other accounts. This book is full of racist nonsense about black men like me. If officers see me in the way this author surely does I can see why they suspects every black male is a criminal.

Very detailed. So much corruption going in LA Police Department. With all these clues, and the crime has yet to be solved.

You’re nobody till somebody

Solves this. Rest In Peace big and pac. Murder Rap is better and more accurate

Great work if journalistic analysis of how race, hip hop and policy came together to not only shape LA in the 90s but also kill two young black men at the prime of their talents

Old information along with some racist undertones. I found myself getting annoyed with this book as it tries to paint the white officers at LAPD as good and the black ones as bad. The reality is the whole institution is rotten!! This is the same LAPD that Mark Furhman came from - A self confessed violent racist!! Russell didn’t go after him or even mention him. I’d like to give this book no stars.