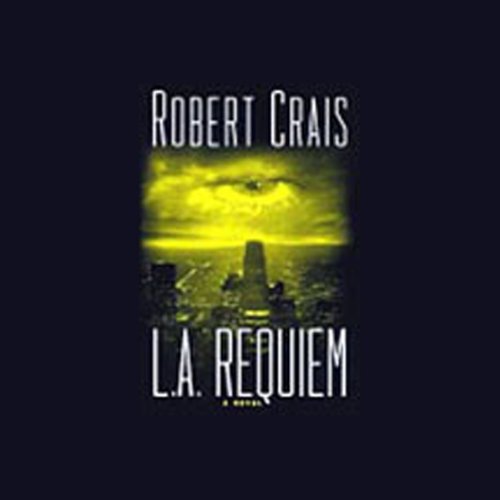 The day starts like any other in LA. The sun burns hot as the Santa Ana winds blow ash from mountain fires to coat the glittering city. But for Private Investigator Joe Pike, the city will never be the same again. His ex-lover, Karen Garcia, is dead, brutally murdered with a gun shot to the head.

Now, Karen's powerful father calls on Pike (a former cop) and his partner, Elvis Cole, to keep an eye on the LAPD as they search for his daughter's killer - because in the luminous City of Angels, everyone has secrets, and even the mighty blue have something to hide.

But what starts as a little procedural hand-holding turns into a deadly game of cat and mouse. For a dark web of conspiracy threatens to destroy Pike and Cole's 12-year friendship - if not their lives. And LA just might be singing their dirge.

“One of the best crime novels I've ever read. Absolutely terrific!” (David Baldacci)

“Darker, denser, deeper, and more satisfying than anything he’s written before.” (The Denver Post)

“[A] whodunit with salsa and soul.... [Crais] keeps his plot pounding along.” (People)

“One of the best crime novels I've ever read. Absolutely terrific!” (David Baldacci)

“Darker, denser, deeper, and more satisfying than anything he’s written before.” (The Denver Post)

“[A] whodunit with salsa and soul...[Crais] keeps his plot pounding along.” (People)

What listeners say about L.A. Requiem

I've listened to/read this book with great joy on at least three different occasions. I love Robert Crais' work. Elvis Cole and Joe Pike are quite a team, their loyalty and dedication to each other makes them the best of friends and its a great treat to see them work a case together. This case is a little too close to home for both characters and it will take all of Elvis' detective skills to solve this one (especially since its his friends life in the balance).

LA Requiem, though not the first in the 'Elvis Cole' novels was the first I listened to/read and I was immediately hooked. I've since read every book in this series and have never been disappointed.

I was disappointed however with this particular audio version of LA Requiem. The version I originally listened to and enjoyed was borrowed from the local library. Recorded Books is the name of the company that produced that version and the narrator, Ron McLarty did an outstanding job. In fact it was his reading that helped pull me into the story. He has a gift for making each character real; its quite easy for the listener to get caught-up in the story. If you listen to both versions You will have no problem in seeing the difference in the narration style.

Robert Crais can always be counted on to give bang for the buck. His signature character, Elvis Cole, is so vivid, he has more flesh of reality than any other fictional detective in literature with the exception of perhaps Sherlock Holmes. Normally the key, he gives way to Joe Pike, his anything but chatty companion, in this outing. Joe is the main guy this time and he carries the story along to its interesting conclusion. I loved this book, as I do all of Mr. Crais' novels, and highly recommend it to anyone in search of good read and a compelling story.

I have read every book in this series I could get my hands on. Elvis Cole and Joe Pike are two detectives with heart, humor and street smarts. Elivs has a smart mouth that had me laughing out loud and Joe..well Joe doesn't say much but when he does you listen. I highly recommend the Elvis Cole series to everyone who enjoyes a smart mouthed detective, with a great sense of humor thrown in. wonderfully written and read.

Robert Crais is one of my favorite writers of detective fiction and LA Requiem is one of my favorite books of his. I love the Joe Pike character and this story gives some essential background on him that explains a lot about his temperament. The problem with this audio book is the narrator. He was so bad that at several points in the book I actually cringed at his portrayal of characters. I read a previous review that mentioned they heard a version of this book with Ron McLarty narrating and I heartily wish Audible had chosen that version.

Good book, I enjoyed learning more about Pike and his history.

Evis shows that his friends mean everything to him and he goes to the wall to save Joe.
it was abridged-- wish it was unabridged. but worth it.

I liked both the story and the reading. This is the third book I listened to by Robert Crais and I think he is going long way to be one of my favorite writer. Thanks from Icelandic girl

Where does L.A. Requiem rank among all the audiobooks you’ve listened to so far?

If you like this type of detective story, it ranks very high with other books of this type. As I have read all of Robert B. Parker's stories, I needed something similar for light reading who-done-its. This series is fun, action packed and not too heavy of a story. The characters are very believable for the time period in which it is set in L. A. area.

What was one of the most memorable moments of L.A. Requiem?

Finding out the history of Joe Pike was most interesting part of the story.

What does John Bedford Lloyd bring to the story that you wouldn’t experience if you just read the book?

Lloyd's reading does set the mood for the story better than just reading it. You would loose some of the detail of the culture if it were just read from the book.

Do the good guys always win?

I would recommend the entire series of these stories. It would be better if you started with the first book and read the series in roughly the order they are written. If you like the L. A. area or are curious about the culture during the time period of the stories, these books have a good historical perspective as well.

The interplay between humor and intrigue

Have you listened to any of John Bedford Lloyd’s other performances? How does this one compare?

one of my favourite robert crais books yet! really good plot and good narrator. thoroughly enjoyed it.

Great book well read and cannot wait for the next book to come out, excellent value for money