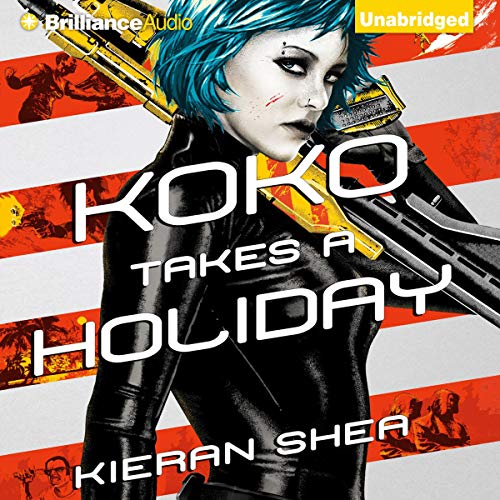 Five hundred years from now, ex-corporate mercenary Koko Martstellar is swaggering through an easy early retirement as a brothel owner on The Sixty Islands, a manufactured tropical resort archipelago known for its sex and simulated violence. Surrounded by slang-drooling boywhores and synthetic komodo dragons, Koko finds the most challenging part of her day might be deciding on her next drink. That is, until her old comrade Portia Delacompte sends a squad of security personnel to murder her.

What listeners say about Koko Takes a Holiday

Really liked the characters and the world the author built. The story is pretty simple, but that is what I was looking for. The twist at the end of the story caught me by surprise I must admit. The narrator's performance was really good and added a lot to story.

Action thriller with not a lot of depth but it is pretty good. I had a weird feeling of déjà vu the entire book like I read it before but I couldn't have. I liked it enough that I will probably read the next one when it comes out.

The narration is very good, I enjoyed the characters and plot. Looking forward to the next book in series.

What did you love best about Koko Takes a Holiday?

The premise and lead character more than anything else. The cyberpunk setting is quite nice and I quite enjoy the more satirical elements that seem pulled straight from a Paul Verhoeven flick. Honestly, I'd think it would work better as a film, not just from the random commercials throughout that help build the world, but because the present tense narration reads more like a screenplay than a novel.

Would you recommend Koko Takes a Holiday to your friends? Why or why not?

Depends on the friends. Know a few who would be put off by the gratuitous violence and sexuality on display, but others who would be sold on it. Definitely the kind of book I'd recommend to any friends who enjoy a good old action romp.

The poker scene. The banter between Koko and Flynn is great and sharp. Definitely the high point.

I'm horrible with taglines. Seriously, don't ask me this kind of thing.

Great listen if you're looking for something a little less serious to spend your time with.

Nice fast-paced action set in a sci-fi dystopia. Dark humor, lots of violence, focused on the action and drive of the story. Some nice banter to the dialogue. I guess some are comparing it to a comic book, but my first thought was, oh, this reads sort of like a Lee Child book, which is meant to be both praise and criticism. Takes you on a fun ride for sure. I especially liked the first half, perhaps because there was more intriguing world-building going on before it was all about the action and plot threads being brought together in some typical fashion or other.

But my problem, as it was with the Lee Child I have read, is that I couldn't really get into any of the characters. They're cool, and fun to tag along with for the action and reaction that drives the plot, but I didn't find a deeper interest pulling me into their lives. As much as I wanted to with Koko and Depressus Guy (Flynn). It felt like I could've gotten that, if I'd a bit more here or there that made it meaningful for them, but Depressus was just sort've there for Flynn just because (maybe due to how messed up and dystopian everything was, but it just wasn't quite enough for me), and Koko of course was just naturally sarcastic about everything, which is fine and all, but I just didn't feel it mattered as much as it could have. I wanted a bit more pull and tug and tension there that I wasn't getting.

Still, worth a quick read when you need something light. Ironically, as dark and violent as this book felt on the surface, I needed something light after the Rick Remender comics I read at the end of 2015. Though with some of that constant push drive behind the action that has people comparing Koko Takes a Holiday to a comic, Remender's Low and Tokyo Ghost were both darker, heavier stories than this one.

Oh, yeah, Hillary Huber's narration for the audio was good. Kept me listening.

Would you be willing to try another book from Kieran Shea? Why or why not?

I'll probably try the next Koko book at some point, just to see where the author decides to take it. Makes for a quick read.

Which character – as performed by Hillary Huber – was your favorite?

Huber was a good fit for both protagonist and villain. Decent for Depressus side-kick guy, though he didn't always sound all that depressed honestly.

Would be a blast of a movie. Like a Die Hard flick.

Koko is a well developed anti hero character that the narrator performs quite well. Flynn provides a glimpse in the life of this 25th century chaotic warmth and the semblance of a loyal center in an amoral world. But the blind ambition of Porsche and the lengths she will go to without knowing due to a memory swipe seems more like a writing shortcut to bypass any internal character development or the social context that such ambition would arise from. The novel creates a world of socio economic upheaval with touches of religious political and corporate power structure that it vaguely sketches out, leaving much to be desired.

This was a pretty entertaining story, and the narration was a lot better than most other books I've listened to, but it was slightly hard to follow the chapters that were describing the advertisements, and it was a tad predictable. I give it a 95/100.

I have often wondered what happens to Anime characters when their show ends. It appears that some of them found their way into “Koko Takes a Holiday”. It has a comic book feel, and the main character has blue, spikey hair. Maybe the author will become a renowned and bestselling writer, and then we will chuckle at the early works.