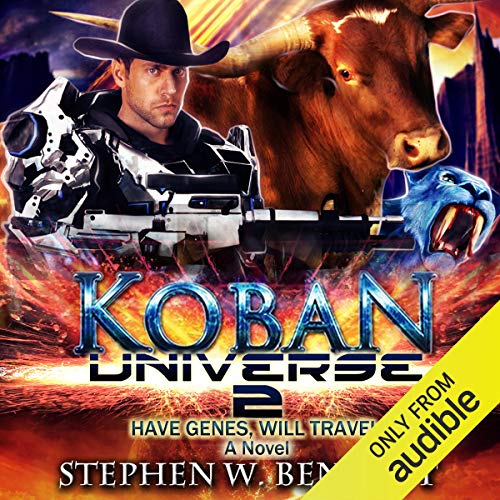 Koban Universe 2: Have Genes, Will Travel

This novel is derived from the Koban Series, but isn't an extension of that. It can be listened to as a standalone novel, because how the Kobani human variant came to exist is explained in a short description in the front (skip that if you know). Then a prologue propels you into this sci-fi cowboy in space story.

For over a hundred years, Chisholm, a Rim World colony, has produced beef for most of Human Space, raising vast herds of a breed of Giant Longhorns. Things are changing, and land reform is demanded by small ranchers and farmers, placing restrictions on the existing open range policy. The wealthy large ranchers will stop this, any way they can, to preserve their profits. Passions are high and the opposing sides have turned violent.

Ethan, a gene-modified Kobani, travels to Chisholm with his sister, Kit, seeking a high-risk employment opportunity in the growing Range War, where raids and murders have wiped out entire families. Gunmen and killers are in demand by both sides, with premiums paid for greater lethality, so using their contact telepathic ability, Ethan and his deadly sister Kit, chose a side. They'll face a hundred hired guns, the outcome deciding who will control the future of Chisholm. Powerful men are determined to block reforms by driving off or killing those opposed to them, and adamant reformers will meet violence with violence.

Hired by one side in the conflict, an unexpected betrayal strikes down Ethan, and he vanishes. Kit goes on a rampage, terrorizing anyone with knowledge, to discover what happened to him, and dismembered bodies accumulate as she searches for her brother. Knowing telepathically exactly what evil an individual has committed isn't admissible in courts there, or heeded by corrupt sheriffs. However, possessing the truth is ample motivation for ignoring the law to Kit, and she summons help from home. In a final bloody confrontation, with deaths on both sides, a solution that only those from Koban could produce is achieved.

What listeners say about Koban Universe 2: Have Genes, Will Travel

Kobani in the Wild Wild West . . . with Rippers!

Chisholm is a Rim planet where filthy rich cattle barons and poor struggling sheep herds are having a range war. It's a familiar western movie trope: The cattle barons have large herds and don't want to share the grazing land. They've employed some pretty viscious gunmen to take out the competition, and since they control the sheriff and the judges, they are able to get away with murder.

The smaller cattle outfits and the sheep farmers have had enough when they start shooting people in the back and burning down their homes, and decided to hire some help. They get together and answer an ad for a Kobani business called Have Genes, Will Travel.

Nathan and Kit decide to answer the call for help, and head for Chisholm, where they are met at the landing pad by a group of killers. Of course, they manage to impress the killers with their unusual skills. The wealthy cattle barons then attempt to hire Nathan and Kit for their side, but when they fail, decide to have them ambushed and killed instead.

Clearly, they don't know who they're dealing with!

This is a great story with the kind of storyline you would expect in an old western movie -- complete with a beautiful madam -- but with all the modern sci fi elements you expect from Steve Bennett. I found it hugely entertaining.

Highly Recommended for: People who love sci fi and/or sci fi/western mashups! Or anyone who enjoys a slick caper job with lots of plot twists, and a very large, very pissed off blue 'tiger.'

Great example of how to tell a story!

This is one of my favorite series' on Audible. I hope the author makes more soon.

after the cliffhanger in Federation I hope these are not the end of that series. This was a good story with the kids and rippers but I hope he rejoins where Federation left off. love this sried

I admit the title snagged me and I debated for a day or two about purchasing Have Genes Will Travel since books 1 thru 3 had been shelved and gathering dust. I did recall skipping some incidents in book one because of too graphic blood letting but I did my "Dust to Dust" to the series because it had become boring and dry. But I spent a credit on Have Genes because I couldn't image or justify a range war hundreds of years in the future! It was righteous decision. Mr. Summerer breathed life into the book with his great performance and Bennett must have been struck by lightening because it was a lively, at times, humorous , fun book! So credit in hand, I'll get book 4, 5, and 6. Join me?

editing was a little lax

in some parts pacing was a little off. I won't go into detail not wanting to ruin the story. At some points the action is going on and story will suddenly slow to explain things that don't need explaining.

Quite an enjoyable listen. the further adventures of previous characters. well worth the time and money.

This was an entertaining side story in the Koban universe. I appreciated that Rippers were fleshed out a bit more than had been done in other books. They no longer feel like support characters that depend on humans without fully understanding technology and the greater politics in the series. They're definitely on equal footing with the other species with intelligence and better in regards to understanding humans.

IMHO the particular mix of space cowboy was done well and the characters' motivations and actions fit.

Summerer did a great job as always.

If you liked the sheik side plot in the last Koban book, definitely grab this.

What a great idea to use the Koban Universe as a foundation to go into other adventures. There are some very exciting parts in this story, there's a bit of a cliff-hanger vibe in the midst of the plot and I was surprised to find myself anxious to find out what was going to happen next.

However, there are some awkward dialogues as the characters' conversations are used to bring readers up to speed on some details, or to remind readers of previous details, and it got distracting because people who have known each other all their lives wouldn't talk like that - or even people who have just met - but the book is so fun that it's just a glitch and something an alert Editor should have caught and helped the author notice too before the book got published. Such repetitive details could be in a separate paragraph, and only mentioned once.

I still look forward to the next book, and still recommend this series to people - the first books were innovative and exciting and well done - and this new direction has promise.

The narrator did a great job with the Western accents, but every now and then the voices of previous characters in the first Koban Universe series popped up (Capt. Murikami's voice and Maggie's voice) and it makes the narrator's repertoire seem limited - this is stuff a person that acts like a director or producer should be watching for in an audio book . . .

This is such an exciting series . . . I love the light-hearted banter, and the moral and ethical code underlying the storyline . . . and am looking forward to the next book.

To much narrative not enough action

To much narrative not enough action, A poor substitute for the original Koban series, what a shame.

This is one of the best series I have ever read or listened to. I highly recommend the complete series.