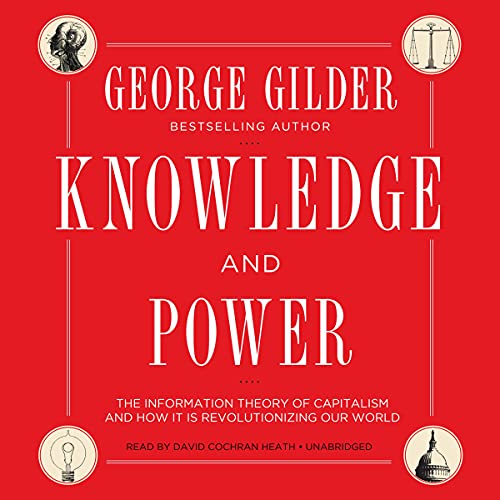 Just when our economy desperately needs a new direction, Ronald Reagan’s most quoted living author - George Gilder - is back with an all-new paradigm-shifting theory of capitalism that will upturn conventional wisdom.

America’s struggling economy needs a better philosophy than the college student’s lament,“I can’t be out of money, I still have checks in my checkbook!” We've tried a government spending spree, and we've learned it doesn't work. Now is the time to rededicate our country to the pursuit of free-market capitalism, before we’re buried under a mound of debt and unfunded entitlements. But how do we navigate between government spending that’s too big to sustain and financial institutions that are “too big to fail?” In Knowledge and Power, George Gilder proposes a bold new theory on how capitalism produces wealth and how our economy can regain its vitality and growth.

Gilder breaks away from the supply-side model of economics to present a new economic paradigm: the epic conflict between the knowledge of entrepreneurs on one side, the blunt power of government on the other. The knowledge of entrepreneurs and their freedom to share and use that knowledge are the sparks that light up the economy and set its gears in motion. The power of government to regulate,stifle, manipulate, subsidize, or suppress knowledge and ideas is the inertia that slows those gears down or keeps them from turning at all.

One of the twentieth century’s defining economic minds has returned with a new philosophy to carry us into the twenty-first. Knowledge and Power is a must-read for fiscal conservatives, business owners, CEOs, investors, and anyone interested in propelling America’s economy to future success.

What listeners say about Knowledge and Power

Economists usually talk in terms of supply & demand, return on investment, productivity, efficiency and so on; a rather materialistic approach. Humans are usually treated like machines, i.e. human capital or human resources.

In "Knowledge and Power", George Gilder takes a different tack to economic growth. According to Gilder, economic growth is a first order function of human Creativity. The Creator is the Entrepreneur. The Entrepreneur knows his field and has rapid access to the information he requires. Therefore, he has the Knowledge required to realize his idea. However, he also must have Power over his project so he'll be willing to take the risk and start a new business. If we give him the Power, he'll create jobs and grow the economy.

What an enlightening and simple concept. Give the Entrepreneur the Power to control his life and his project and he'll be off taking all kinds of risk to realize his dream. That means Power needs to be distributed to where the Knowledge is. If Power is centralized, bad decisions are made due to insufficient Knowledge and lack of skin in the game.

Geoge does not engage in a Zero Sum Game like Marxist economists. He does not endorse the Keynesian theory of Growth though stimulus, which is just another Zero Sum Game. He goes beyond Supply Side Economics. He puts human creativity front and center. When creativity lies dormant, there is stagnation.

Knowledge and Power is well researched. Gilder reviews many other books on the subject.

What did you love best about Knowledge and Power?

It's a novel and important view of economics.

What was one of the most memorable moments of Knowledge and Power?

The revelation that all prior economic theory is too mechanistic.

Which character – as performed by David Cochran Heath – was your favorite?

Poetry. That’s how a friend once described George Gilder’s Wealth and Poverty; he was right. Well, so too is Knowledge and Power. I have just finished the hardback and have ordered an audio version as well because reading wasn’t enough. Knowledge and Power is a fresh and insightful view of economics. In the last decade, I read perhaps a dozen books on economics, but still remained uncomfortable with the topic. Relationships among spending, saving, inflation, currency values, regulation, productivity, trade, tariffs, subsidies, taxes, and more were confusing in the extreme. Knowledge and Power is a giant step in the clarification of what until now seemed an intractable topic.
Classical economics, whether in the Keynesian variety or the supply-side variety, builds models of economic systems from a mechanistic point of view. That is, it tries to build systems that interact with humans, but for which the human is not an integral part of the system. Economics before Knowledge and Power had the equivalent of a Newtonian perspective: it was believed possible to construct a closed-system model that could predict behavior of humans interacting with the system and responding to incentives. Past economic models have treated capitalism as an incentive system, but in reality capitalism is an information system. An economy is a vast information system in which knowledge is distributed among its human actors. In capitalist systems, knowledge and power are together in the individual; in socialist systems knowledge still resides in individuals, but power is vested a hierarchy with no access to the knowledge. Knowledge and Power shows that information and the human, and specifically the entrepreneur, are central to any economic model.
Further, in Knowledge and Power George Gilder applies a deep understanding of communication theory to economics. Economic systems, in an analogy to communication systems, can be divided into content and conduit; that is, divided into the information or knowledge (content) and the means for delivery (carrier or conduit). The conduit is the transport mechanism; it has to be predictable and reliable for the most efficient transfer of content. If the conduit is noisy, unreliable, or if its function varies with time, then its ability to transport content degrades. For economic systems, conduit includes such things as stable currency, property rights, modest taxes, and rule of law. The content is the exchange of information and goods. If the conduit elements of the system aren’t reliable, predictable, and stable, then the flow information and goods is degraded or even perverted. Valuable human intelligence (the ultimate resource) is diverted to compensate for or even to exploit noise in the conduit. People choose careers in currency trading, regulatory agencies, tax consulting, government, and law instead of science, engineering, and business and we are all poorer as a result.

Knowledge & Power is a superb explanation of how our complicated economic engine works and the fuel it runs on...the human mind, creativity, entrepreneurs, and the entropy of ideas. This book restores my faith in man, the individual, capitalism, and our uncertain future.

Lots of big words from engineering and business that make no sense because of wrong context. Educated but misinformed. Terrible distortion of knowlrdgre.

I usually don't write negative reviews, but this one drew me out because of the dissonance between presumably celebrated reputation of the author and the mostly trashy content of the book. Admittedly, the economic ideas may have some merit (pushing the supply side economics), and information theoretic metafors may have some poetic value, as well as recanting some great ideas of the 20th century science. Unfortunately, the narrative citing these ideas betrays the total failure by the author to grasp what those ideas are all about. So in essence the book does serious disservice in terms of popular education of the public.

I really enjoyed this book and the emmen amount of knowledge contained within. Excellent narrator too!

I loved this book because it was a beautiful explanation of the information theory of capitalism and that alone would have been worth it but the concepts in this book are applicable to every area of life. Great book and great reader!

An Economic Explanation of Growth

This is not easy reading (listening), because Gilder can use some long sentences and big words. I have "read" the book twice, once from printed pages and once from Audible. But it IS breakthrough economic and political thinking. Gilder presents a compelling case that power separated from knowledge produces poor results. (For example, designing programs in Washington DC to improve local education is unlikely to produce anything valuable and is more likely to waste a lot of money. Moving the power to solve a problem close to the specific problem, is far more likely to produce a positive result.) Some Democrat readers will be turned off by Gilder's political references. He wrote most of the book believing he would be a policy adviser in a Romney administration. But economic theory is apolitical. It is either more useful at explaining the world or less useful. This book is VERY useful because of its insight.

I enjoyed this book. Gilder presents a novel (to me) explanation of the conditions that facilitate innovation and technological development. It gave me a new perspective that I suspect will enhance my own entrepreneurial activities. I recommend it.

... And explanation of human progress. a great unifying theory of the centerpiece of information in progress and in the success of capitalism in bringing that progress.