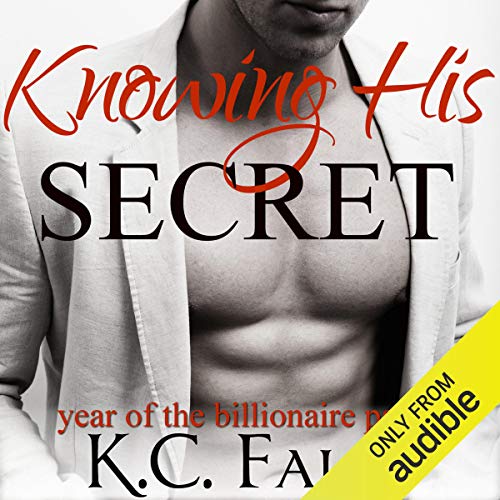 He looked like the kind of man even my mother would call smokin' hot. Eventually, she did. He felt like the kind of man who didn't just break the rules, but made new ones. He led and it was follow or get out of the way. Why did a billionaire with a voice like liquid silk and a face like a bad angel take a second look at a girl in no-name jeans, with a fifteen-dollar haircut and a beat up car she calls her "Eep" because the 'J' fell off long ago?

I didn't want to know why and when I thought I knew I didn't want to admit it. By the time I found his secret, it was already too late. His passion had me hooked like a drug. It didn't hurt that he pulled the people I love the most out of harm's way. A girl can get used to a knight in shining armor even when the armor has some very large dents in it.

What listeners say about Knowing His Secret

The narrator was so stiff I've had more fun listening to a teacher read the history book in class. it was flat with no emotions or rise and no place for erotica or any other type of contemporary romance stories. I didn't finish the book so I can't say how the story was.

I was given this book by the author, narrator or publisher in exchange for my unbiased opinion through AudioBoom..

Could get past chapter one

The narrators voice was so annoying I couldn't get past chapter one!!! I can normally push throw, but I'll have to read this book on my kindle and skip the horrible narration!!!

This genre is what it is. Light fare for a drive home or while walking around from department to department at work. This however made it three chapters and it was gone. Predictable characters and storyline without inspiration.

What was most disappointing about K.C. Falls’s story?

Not one character you liked or rooted for, not to mention another cardboard cutout leading man

Narrator's use of inflection was beyond terrible. Some lines read as a teenage girl, some as an excited child, most without any emotion nor a clue as to the context of the line

Did Knowing His Secret inspire you to do anything?

Yes, ensure this narrator is never on any book I choose in the future.

Without a doubt s singular waste of time and effort. For the author, narrator and myself.

the narrator sounded juvenile and the story was blan. it was hard to keep my interest. some times, the author cut off when more explanation was needed.

Would you try another book from K.C. Falls and/or Mona Bella?

Probably yes, even though this one wasn't exciting enough to keep me interested in the other two of the series.

Would you recommend Knowing His Secret to your friends? Why or why not?

It was overall a nice, easy, lots of good sex scenes, love story but nothing unique about it.

Which character – as performed by Mona Bella – was your favorite?

No one in particular. They were all just nice.

Did Knowing His Secret inspire you to do anything?

Fast read, easy too. Nothing more, nothing less

Thank you very much.

The writing sounds like it was written by a high school student. The sentence structure is very basic and needs to be more complex. The editing on the audio was horrible. In several places the lines are repeated twice. The person doing the reading needs work. In some places she is great, in other places she sounds mechanical. She also gets her character voices mixed..

narrator is the problem

A more experienced narrator, this one's voice was whiny and her male voices did not work

I like this type of story when I'm running around doing errands. The story itself was okay but I won't get part 2 from Audible because of the narrator.

Dawn's Review of Knowing His Secret

The book was good. The story line still developing. The ending stunk! I don't mind a tease for me to want to purchase the next book, but this was a little much.

My number one complaint about the book is that there seemed to be parts that would keep repeating. Almost like an old record that the needle used to get caught in a grove. Drove me a little crazy.

the story is short but is in installments. the narrator's voice is a little annoying but what is worse is the repeating. there are several instances in the recording where the lines repeat like a needle on a record player that has a skip. rather annoying.