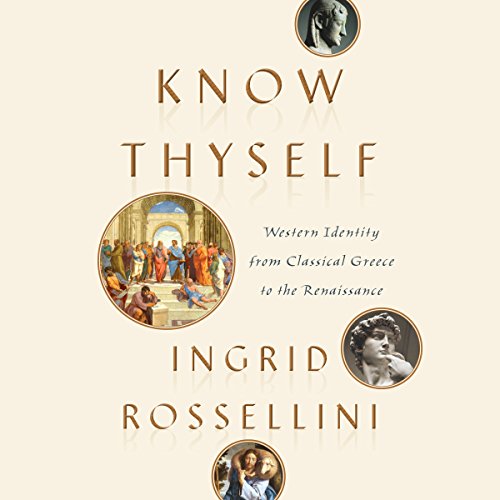 A lively and timely introduction to the roots of self-understanding - who we are and how we should act - in the cultures of ancient Greece, the Roman Empire, and Middle Ages and the Renaissance.

"Know thyself" - this fundamental imperative appeared for the first time in ancient Greece, specifically in Delphi, the temple of the god Apollo, who represented the enlightened power of reason. For the Greeks, self-knowledge and identity were the basics of their civilization and their sources were to be found in where one was born and into which social group. These determined who you were and what your duties were. In this book the independent scholar Ingrid Rossellini surveys the major ideas that, from Greek and Roman antiquity through the Christian medieval era up to the dawn of modernity in the Renaissance, have guided the Western project of self-knowledge.

Addressing the curious lay listener with an interdisciplinary approach that includes numerous references to the visual arts, Know Thyself will reintroduce listeners to the most profound and enduring ways our civilization has framed the issues of self and society, in the process helping us rediscover the very building blocks of our personality.

"Rumors of the death of Western civilization must be questioned when a work of popular history as absorbing and readable as this is published...New Western civ classes could ask for no better overview." (Booklist, starred review)

“Polymath Rossellini shares the fruits of her broad knowledge of literature, philosophy, art, and history in this…highly rewarding work…a highly satisfying journey across centuries of culture...Rossellini gives us illuminating classes in art history, Western civilization, philosophy, and religion, all rolled into one book that must be read closely and pondered fully.” (Kirkus, starred review)

What listeners say about Know Thyself

This covers quite a span of time and cultural history. Heroic models and ideals (of thinkers as well as popular action heroes and artists) are a focus. I very much liked the sophisticated, yet understandable, unpacking of Christianity's ideas and ideals as it evolved. Women's roles are discussed, though sparingly. The narration is quite skillful and a good fit.