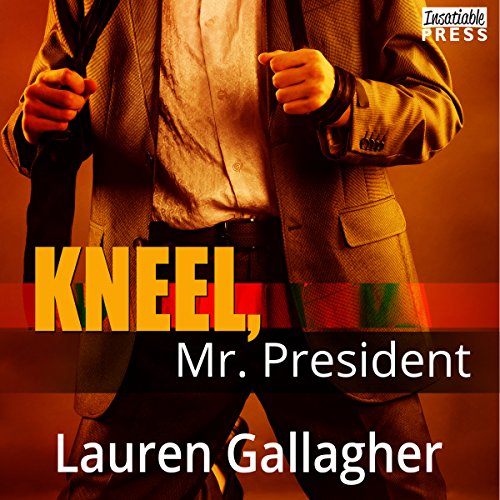 Sworn to have their lover's back, front, or any other side that needs covering.

Secret Service agent Kent Sinclair, head of POTUS security, thought himself prepared for every contingency. Until the First Lady - a woman who barely tolerates his presence - approaches him with a request that startles the hell out of him.

Carlene Broderick is frightened. With the weight of the country and impending war on his shoulders, her husband, James, is buckling under the strain. The key to helping him cope is the name he calls out in his sleep - and it's not hers. It belongs to his fellow ex-SEAL team buddy. His ex-lover. Kent.

Without hesitation, Kent plunges into treacherous emotional territory, only to realize it's not really him that James needs. The Commander in Chief needs to give up complete control in the bedroom.

To relieve that much pressure, Kent and Carlene must work together and declare a truce that rapidly heats up into something more. Something that leaves James caught deep in forbidden territory - torn between his beloved wife and the man he's never stopped loving.

Warning: Contains three 40-somethings discovering whole new sides of themselves, a rejuvenated marriage, and plenty of kinky fun. All brought to you by an ex-SEAL in a wetsuit, a bisexual president, and a First Lady with a tattoo on her ass.

Ok, I need a few days after finishing this book to digest it before I reviewed it. First I love MM, MMF, and MFM. So this book already had that going for it. You have 3 main characters The President James, his wife Carlene, and Kent who is head of security for The President. Carlene is my favorite character and here is why. She sees that the Presidency is killing her husband, he is too stressed. She has tried all she can to help him but nothing is working. Something has to happen or she fears he isn’t going to be long on this earth the stress is going to eat him alive. Kent is not only the head of security but he is an ex-teammate from their seal days, but he is also an ex-lover. He still has feelings for James, but would never let him know it because just having James in his life is enough. He also knows James loves his wife. Carlene loves her husband enough to know that he needs something, something she can’t give him and that something is Kent. This story is beyond awesome, The emotions, the ties to one another. The respect they give. Kent and Carlene also become friends and learn what James needs. It is light on the BDSM but it’s in this book and I love that Carlene is women enough to ask for help. I want and need to read more books like this. And the narrator wow he does an incredible job giving each character their own voice. You can’t ask for more than that. LOVED his performance.

So much more than I expected!!

Wow I didn't expect to love this audiobook as much as I did!! This books has MF, MM, MMF and MFM scenes and wow they were HOT, that is not was I was surprised about though, I was expecting that! What I didn't expect was how great the story is too! It's a love story by far, with a wife who loves her husband enough to try anything to help him deal with the stress of being the president and PTSD (or so she thought). It's also a love story about two men who have trusted and loved each other for years! The characters were great, non of them petty, vindictive or childish and I loved that!! They all talk to each other openly when they have something on their minds... wow there's a concept ;) I wish more romance books had that and less "misunderstandings"! I will be looking for more audiobooks by this author and by the narrator!

The narration was PERFECT! Aiden Snow did a great job for all 3 characters! he has the perfect growly voice for these alpha males!

I loved this book. Very hot and spicy. I wasn't sure if I would like something with two men and a woman but it rocked.

Left me feeling defiled and depressed

The narration was great. Loved Aiden Snow. Hated the story because Carlene was clearly tormented by the thought of her husband sleeping with another man yet she forced it on, ignoring Kent's reluctance and refusal to believe that would help.

In the end, an unconvincing menage relationship that never should have started, a book that never ought to have been written.

This is the unselfish love story of a heartbroken woman (first lady) doing what she has to do to keep her husband (POTUS) sane. She confides in his best friend / Secret Service agent. After the revelation, the rest is heartfelt, steamy and so much love to be shared by the three. Yes, worth my credit.

I loved this audiobook. Lauren Gallagher gave me the MMF book I’ve been dreaming about. Long enough to give each individual their own back story, each pairing their own significant relationship, create a cohesive triad, and still leave room for plenty of steamy scenes. There are MF, MM, & MMF scenes. This is best enjoyed when the exploration of the relationship means as much (if not more) to the listener than the sex or how kinky it can get. I’ll admit that there are parts about the set-up in regards to how the White House or Secret Service operates that seem highly unlikely, but I enjoyed the totality so much that it wouldn’t keep me from listening to it over and over again. One of the unique aspects of this is that Carlene and Kent don’t actually get along at the beginning and Gallagher spends a lot of time bringing them to a begrudging understanding and then to an affinity of their own. James struggles to balance his own needs with theirs while ultimately understanding and embracing his desire to submit. Aiden Snow is terrific here. He does a great job of differentiating all the voices – especially Kent & James, which is really nice when they each have so much dialogue. Listening to him for 11 hours is no chore at all. Note: At the time of this review (August 2020), the ebook is available for $4.99 or to borrow via Kindle Unlimited and it's only $2.99 to add the audio.

I don't know what it was but it seems the story just took forever to unfold. The narration was fantastic and flawless.

First I have to say that I listened to this book on a recommendation, based on the cover I would not have chosen it. But with that said I was pleasantly surprised, and this was nothing that I expected. I even started and then before the first chapter was kind of blah and started it over. If you like MM,MMF, MFM Dominant, Subordinate books then you may just like this one. I didn't realize that's what I was going to be getting with this one but hot d**n. This book wasn't just about sex between the three characters but instead what genuine love for another person could bring you to do when you see that they are suffering or are unhappy. Carlene turned to Ken because she saw something missing in her husband James (the president) and because Kent and James' friendship was from their Navy Seal days and continued with Kent guarding him as President she turned to him to help her because she feared the stress of the Presidency would kill him. Well Kent figured it out, explained it to Carlene and it began. James was not only in love with his wife but he was also in love with his best friend Kent, and needed to be dominated by both. Seriously unexpected book.

I really didn't think I was going to like this as much as I did. the characters are so well developed and the story is excellent. the plot is totally believable and the way that the characters come to terms with the relationship that unfolds is so well written and realistic. The narration is also excellent.