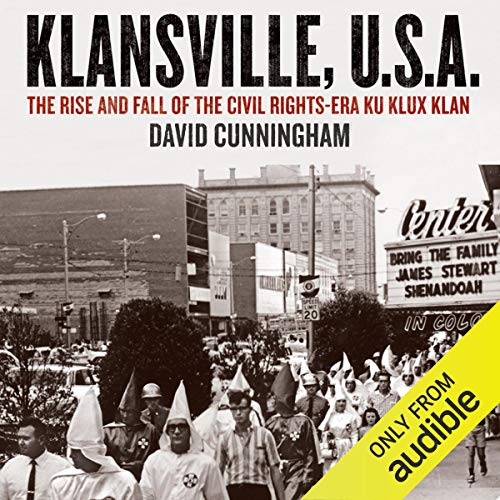 The Rise and Fall of the Civil Rights-era Ku Klux Klan
By: David Cunningham
Narrated by: Brian Holsopple
Length: 11 hrs and 33 mins
Categories: History
5.0 out of 5 stars 5.0 (1 rating)

In the 1960s, on the heels of the Brown vs. Board of Education decision and in the midst of the growing Civil Rights Movement, Ku Klux Klan activity boomed, reaching an intensity not seen since the 1920s, when the KKK boasted over 4 million members. Most surprisingly, the state with the largest Klan membership-more than the rest of the South combined-was North Carolina, a supposed bastion of southern-style progressivism. Klansville, U.S.A. is the first substantial history of the civil rights-era KKK's astounding rise and fall, focusing on the under-explored case of the United Klans of America (UKA) in North Carolina. Why the UKA flourished in the Tar Heel state presents a fascinating puzzle and a window into the complex appeal of the Klan as a whole.

Drawing on a range of new archival sources and interviews with Klan members, including state and national leaders, the book uncovers the complex logic of KKK activity. David Cunningham demonstrates that the Klan organized most successfully where whites perceived civil rights reforms to be a significant threat to their status, where mainstream outlets for segregationist resistance were lacking, and where the policing of the Klan's activities was lax. Moreover, by connecting the Klan to the more mainstream segregationist and anti-communist groups across the South, Cunningham provides valuable insight into southern conservatism, its resistance to civil rights, and the region's subsequent dramatic shift to the Republican Party. Klansville, U.S.A. illuminates a period of Klan history that has been largely ignored, shedding new light on organized racism and on how political extremism can intersect with mainstream institutions and ideals.

What listeners say about Klansville, U.S.A

This was an amazing story documenting the KKK and social rights movement in the USA. I have done a lot of study being a jazz singer into the history of African American and Jazz, Blues right back to Field Hollers and new racism existed however it is hard to comprehend how bad the situation is when you grow up in a multicultural society where everyone actually likes each other. I learned a lot. Cheers!

Very detailed and informative of both KKK history and interaction with the Civil Rights movement. Now onto a Civil Rights book!