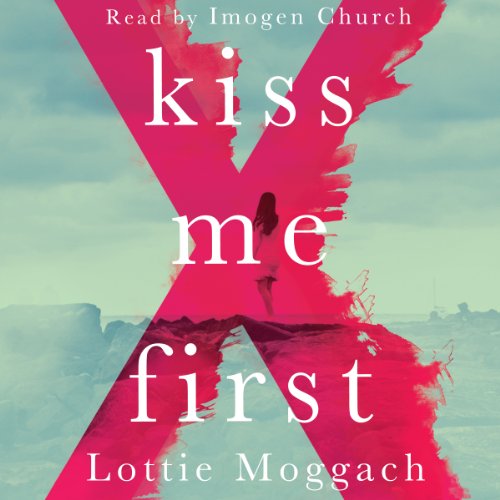 Original, haunting and utterly gripping, Kiss Me First is The Talented Mr Ripley for the online age and the literary thriller that everyone will be talking about.

Leila has never met Tess, but she now knows more about Tess than anyone in the world. She’s read all of her emails, researched her past and asked Tess for every detail about her friends and family. Tess has never met Leila. But if she wants to slip away from the world unnoticed, she needs to trust Leila with her life.

At first, Leila finds it easy to assume Tess’s identity, and no one has any reason to distrust her. But as Leila is soon to discover, there is much more to a person than the facts and there are things about life you can learn only by living it…

For fans of Gone Girl by Gillian Flynn, Before I Go To Sleep by S. J. Watson and Notes on a Scandal by Zoe Heller, Lottie Moggach’s Kiss Me First is an electrifying and unputdownable debut from a phenomenally gifted storyteller.

”How easy is it to disappear without a trace? Well, in a world where so much of our lives is lived online, not that easy. On the other hand, who’s to say it’s really you sending emails or posting photographs on Facebook? Such is the intriguing premise of Lottie Moggach’s disturbing debut novel, which tells the story of Leila, a clever but socially awkward young woman persuaded to impersonate a complete stranger for reasons that only gradually become clear. One thing’s for sure: you won’t feel quite the same in an internet chat room after you’ve finished it.” (Evening Standard, ES Magazine)

”Hailed as this year’s Gone Girl, make room in your beach bag for this.” (Elle Magazine, What the Editors Pack)

"A new literary talent has burst on to the scene in the shape of Lottie Moggach, daughter of bestselling author Deborah … A clever balance is struck by Lottie Moggach, who mixes emotional intensity with a gripping mystery story." (Daily Express)

"Unnvervingly claustrophobic and enormously moving… a metaphor for the creation of identity… Moggach has done a great job of folding these issues into a suspense novel that is classy, frightening and upsetting" (Guardian)

What listeners say about Kiss Me First

This is definitely a novel that lives up to the hype! Forget 'Gone Girl' - this is even better! I listened to this over 2 days on holiday and was absolutely gripped by it. The best audiobook I have listened to this year and I feel bereft now that it's finished. I did not guess where this was going and was mesmerised by the story, the character of Leila and the narration. It was the first time I had heard Imogen Church narrate and really wasn't sure at first. However, she narrated this book perfectly and made every character completely believable. Outstanding.

What am I supposed to listen to now?

Where does Kiss Me First rank among all the audiobooks you’ve listened to so far?

Very high, I found it very easy to get into and soon I was taken in by the twisting, turning plot. It is scary it is how much information is out there on the internet about everyone. Yet still people continue to add more and more information about there lives, work and views. Just as I am now.

Apart from Leila, definitely Jonty. They are certainly an odd couple, Lottie Moggach and Imogen Church conjure up a great picture of these two polar opposites living is a small, onion smelling apartment. His breezy attitude to life, his sense of grabbing life is so different to Leila's closeted online view.

What does Imogen Church bring to the story that you wouldn’t experience if you had only read the book?

From Leila's perspective, Imogen creates a voice for Leila that allows you to easily slip into her computer generated world.Also, am impressed with the seamless accent changes between American, English and Welsh. Imogen manages to give each character a distinct voice without over doing it.

Yes - the tube journey for once wasn't long enough.

I enjoyed this page turner but felt it had a few minor flaws in the story line.

It's an interesting scenario and the main character Leila was quite believable. Beautifully read and the accents were true.,

Have you listened to any of Imogen Church’s other performances? How does this one compare?

Yes and almost did!

The narrator definitely- she was really good and captured the characters very well.

If you’ve listened to books by Lottie Moggach before, how does this one compare?

I haven't listened to any other Lottie Moggach books

Which character – as performed by Imogen Church – was your favourite?

Tess - her eccentric personality was captured exceptionally well by the narrator

Did Kiss Me First inspire you to do anything?

On the basis of this experience I'd be interested to hear other books read by Imogen Church. Less motivated to read another book by Lottie Moggach

The theme of the book was very depressing/ dispiriting. Without wishing to give anything away (so I won't go into detail), the circumstances of both main characters was sad, although in different ways. So at times the book had rather a morbid feel.

What did you like most about Kiss Me First?

I really enjoyed listening to Kiss me first last summer.
The narrator had a pleasant voice and it felt true to the characters.
The story was gripping and kept me going until the end.
I have already recommended it to friends for its originality, it's well written. I wish there more entertaining books like this one.


What was one of the most memorable moments of Kiss Me First?

I really liked when the main character went to meet the guy at his work place and confronted him only to see that what you might get from behind the screen might not be what it really is in the real world.

On the way to meet the man in the train. The main character sees the headline about the boss from the website who recruited her about him being on the run.

That's a good question but I'm afraid I don't know.

What was most disappointing about Lottie Moggach’s story?

The basic idea and creativity behind this book was excellent but the story line was pointless in the end I was left to feel like I had gotten lost and ended up back at the start having learned nothing. there was huge potential for this to have been a brilliant book but unfortunately it was not to be I'm afraid.

Would you be willing to try another one of Imogen Church’s performances?

I feel a little hard done by, cheated out of my valuable reading time.

A story with pathos

Leila is one of life's innocents, someone who doesn't quite fit in and sees life in her own way. Having recently lost her mother for whom she had been caring, she is drawn in to assuming an identity for someone who doesn't want her life anymore. This is the story of someone who lives too much on the internet, avoiding real human contact. I don't want to give too much of the story away, but you keep reading this book to find out what actually happened. The web gets more entangled but at the end it is left for you to decide. The book is well written and although at first I did not like the way the narrator was reading, I realised it was right for the character of Leila. I read this on holiday and it kept my interest well. Recommended.

Has Kiss Me First put you off other books in this genre?

What character would you cut from Kiss Me First?

There are very few characters so it would not be possible to. It any

The story concept is good but it is a bit depressing and the main character is not very well drawn.

What an original story

This is a must listen book for those who like modern fiction, a truly 21st century novel. We all know how powerful and consuming the internet is, but this takes things to a whole new level. I cannot recommend this highly enough.

When I first started listening is wasn't sure I was going to like the narrators accent, but it was perfect for the character of Leila.

The story is unfolding very slowly, and I had to go back the first three chapters again and again as I missed some seemingly important bits which made me fail to understand the jump from London to Spain, past to present.
Having said that, there were very interesting bits in there too, the whole storyline with Connor seemed to present itself as a plot with more potential but ended quite abruptly. Equally, the resolution appeared a tad rushed. All in all, a slightly bizarre book with moments of truth and insight, but a rather unsatisfactory final chapter I felt.