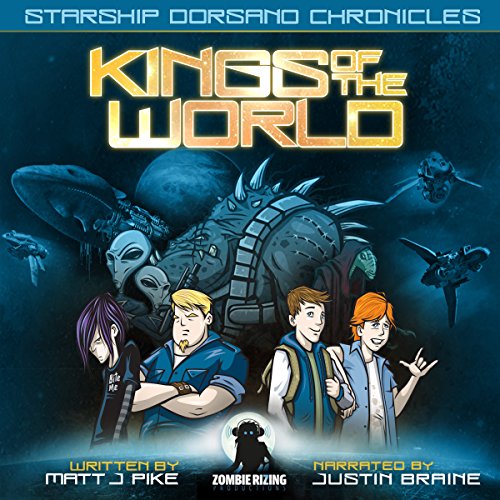 Kings of the World

Kings of the World

The galaxy is on the brink of war, and only four dysfunctional, hormone-driven teenagers from Earth stand in its way. God help us all.

It didn’t take Cooper long to come to the conclusion that space sucks. It seems everyone there despises humans, everything’s too far away, and the travel makes you heave. Worse still, Cooper’s stuck there with his best mate, The Ginge, who can’t tell where games end and reality begins, and two other former classmates who want to beat the crap out of him.

Oh yeah, and people...well, alien people are trying to kill them. Space does have some good points. The boys can have anything they wish for; all they have to do is ask for it…or think it.

Plus they are now somehow Earth’s leaders--as in more important than the president of the United States of America. If Cooper can only stop the other boys from gorging on their every desire, chasing the most human-looking alien women and fighting each other, he might convince everyone that humans aren’t the galactic equivalent of white trash. But things are about to get a whole lot worse.

War looms, and Cooper and his inept sidekicks are caught in the middle. They, the Earth, and the galaxy will never be the same again.

"The galaxy is on the brink of war and four dysfunctional, hormone-driven teenagers are Earth's only hope. Adelaide writer Pike's twisted and colourful imagination straps the reader in and blasts off on a wild intergalactic ride. The humour is sharp and witty and the story is peppered with clever pop culture references, particularly from the world of gaming. From the AC/DC cameo to unexpected teenage fatherhood, the plot twists are utterly unpredictable. The boys find themselves thrust into a position of power in the intergalactic power structure, and, with the fate of the world hanging in the balance, they are forced to make difficult choices. A fantastic debut book that is targeted at teenage boys but which will entertain a much wider audience." ( The Advertiser)

What listeners say about Kings of the World

What a fantastic story! Full of crazy Alien characters and four very silly boys! The action is well paced, and there's just enough 'Sci-Fi' descriptors to get the nerdy juices flowing. I loved the story from start to finish!

Kings of the World is an interesting teen-focused book, purely of the sci-fi genre. It is a satire in which teenagers are resolving their own issues with each other, playing games, talking about music and other teenager like activities. Saving a planet is not number one on their list of to do’s.

The story starts out with four teenagers on Earth living their usual life, leading to an incident where they are offered to join the galactic council to represent Earth. Accepting their new role on the galactic council, they are living a rich life, in space where they can have whatever they ask for absolutely free, they tend to get greedy and are more into playing games rather than representing planet Earth. Of the four of them, Cooper realizes their importance when he learns more about the inter-galactic politics. The fate of the world is left in the hands of four teenagers!

The author’s writing is clear considering he had to introduce so many aliens plus it isn’t easy to paint a picture of the galaxy, tele-porter or the translator who fulfills your every request. Matt Pike, the author used vivid details to make the descriptions clear.

Although it is interesting typical teenage stuff, great references to music and sarcastic comments, the narration by Justin Braine is not as great. His narration becomes irritating, the voice gets steep. This was the case with all his voices as well so that by the end you tend to lose focus. Also all the action of the story lies within the very end of the book. The production had some issues as well as the narrator’s voice became muffled in some places.

Audiobook provided for review by the author.