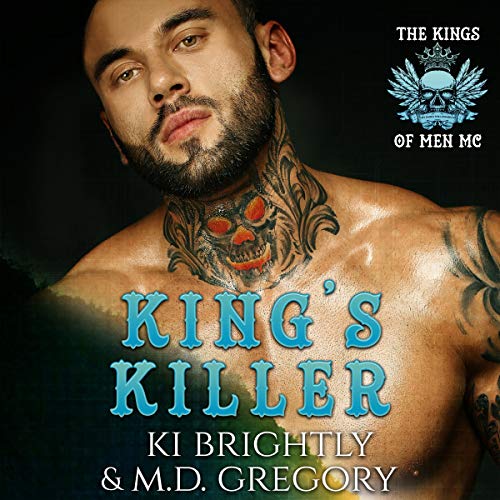 Walking the Line Between Good and Evil

Physician’s assistant by day, doctor to the Kings of Men MC by night. Grant Arthur’s life is tough to balance, but he does what he can to help his brother, Aaron “King” Arthur, the president of the motorcycle club. Trapped as an outsider to the club by his brother for safety, Grant prefers the quiet life, until the Kings visit him in the middle of the night with an injured member. With them is Kai Woodrow, rugged and dangerous, who Grant can’t tear his gaze from.

A Killer Who Gave Away His Heart

Reaper kills for a living. He’s the man King calls when he needs to send a gruesome message. Unfortunately, Reaper’s also human, and has all the needs of a man. He’s been in love with Grant since they shared a foster home as teens, but he knows how protective King is. Reaper could never betray his president and friend, even if Grant’s the only one who sees him as Kai. He settles with quietly stalking Grant, until one night they bring him an injured club member.

When Grant is nearly hurt, Kai can’t resist living in the moment, even if it’s bound to get him killed by King - or someone worse. The world doesn’t stop turning because he finally kissed Grant, but with any illegal motorcycle club, trouble comes along for the ride. When Grant is kidnapped, Kai would move heaven and hell to find him, and destroy the people who took him.

The writing in this book is fine. However, despite a strong start it was a total flop for me. The reason being the sex. At one point while listening to this book I strolled by a mirror and noticed that I actually had my lip physically curled into a sneer. I was that displeased with it.

Here's the thing. I have no problem with the Master/pet, Sir/boy, D/s (whatever you want to call it) relationship as a kink. HOWEVER, in a book it really has to be tied in somehow. In King's Killer, not only did nothing in the narrative suggest either man was into this sort of sex (and at no point had either felt the other out to see if the feeling was mutual), prior to the first sex scene the reader is given the distinct impression at least one of them is against it and the other has only ever really had one night stands. There is a scene in which Grant is speaking to another King, who is into whips, chains and such, and Kai thinks to himself that Grant is too good to get involved with such things. So, when Kai later literally pulls out a chain during sex it felt HORRIBLY incongruous.

Further, part of what Kai is supposed to love about Grant is that he can be his more gentle self. Kai is supposed to be the only man he doesn't want to see him as a monster. So, the first thing he does once he gets him in bed is slap him and start calling him Boy in a distancing manner? No, it doesn't fit the narrative AT ALL! I sneered every time he said it.

I cannot stress enough how out of place this dynamic felt to the story. In fact, I strongly suspect it was only included because the whole Sir/Boy thing was a fad for a little while. I just started skipping through the sex scenes.

Similarly, Kai and Grant were supposed to have known each other since they were children. Exact time frames aren't given. But it's more than 10 years, at least. Since Kai is older, he's fantasized about Grant since he was 16, and Kai is 27 in the book. But the two seem like practical strangers. In the beginning Kai insists on keeping his distance from Kai because he's loyal to Aaron and Grant is afraid of Kai. Then out of nowhere, with no instigating event, the two suddenly threw themselves at one another. What changed? NO idea.

Lastly, I need to address the narrator. He did a fine job. Mechanically I have no complaints. But I think he was the wrong choice for this book. He sounds about 12. I looked him up. He seems to be mid-twenties (or there about), but he sounds young. This made the already unappealing sex scenes super awkward and uncomfortable for me.

All in all, I felt like this book tried to accomplish something it wasn't able to. It didn't have the foundation to carry the dynamic the authors set out to develop (or fell into developing).

I also have a few odd little notes. I'm a little befuddled by one author naming a character after themselves. It may be spelled differently, but I listened to the audio. So, that made no never mind to me. And I think there was a point late in the book where Grant was referred to as Arthur more than once. I was confused, maybe I was misunderstanding something.

Note: I received a free copy of this audio. I chose to listen and review it.

narrating not for me

really liked the story amazing characters well written story line but the narrators voice just didnt do it for me. sounded to much like a female for my liking with this story. but i will be buying the ebook because i enjoyed the story that i want to own it.

New to me author and narrator

This was a new to me author and narrator. I liked the idea of it, but I felt there was something missing.

okay love the story buuuuuuuut the performance is horrible I would rather buy this as a E/book super sad about that, I feel like the voice actor needs to take some extra lessons :(

First off, the story. It was good. Not great but good. I might have given it 4 stars except I think the MCs relationship wasn’t really fleshed out that well. I mean, all the pertinent points were hit & explained but their interactions are mostly sex & we don’t share a lot of their true relationship dialogue/growth except for the very last reconciliation talk. We are told about their interactions and relationship through each MCs internal dialogue.

The narrator. I hate giving 1 star but have to. I’m just going to list the issues I had. 1) he reads fast. I like fast but this one was just shy of being able to reduce speed to 0.75 instead of 1.0. 2) his voice is higher tone. Great for Grant but seemed odd for Kai. That would have been fine except Kai’s speaking voice & internal dialogue voice weren’t the same. Sometimes it felt cartoonish. 3) internal dialogue, reading voice were the same so a couple times I had to pause & rewind to be sure I was following correctly. 4) about 2/3 of the way through the narrator started mixing up the narration and voices of who was talking. A few times. 5) the supporting characters voices were just over the top.

I can’t help but think this story could have been a 4 if narration was better. A well read audio often makes it much easier for me to accept the missing elements of a story because it has me more invested. Here, it made them more obvious and lowered my overall satisfaction. So much so that I am returning the second book in the series I bought at the same time as this one b/c it’s got the same narrator.

Sorry folks.. I don’t post many reviews but felt this had to be shared. Maybe read this one first or at least know what you are getting into. Mr. Tiwanak your artistry may be perfect for many other books. I hope this review is seen as maybe as constructive feedback specific to this performance & book only since I haven’t heard you do any other audiobooks.

This was an enjoyable listen for me. I like the premise of the biker/doctor romance and I like how well Grant and Kai fit together. They've each had a secret attraction to the other for years but have never given in to their feelings. Now they can't stay away from one another but have to keep it hidden from Grant's brother, the president of the MC. Lots of drama, suspense and action to get to their HEA. The narrator did a good job with this story. I voluntarily reviewed a gifted copy of this audiobook.

Thisnis a great start to this series. Kai and Great has great chemistry together. I like this storyline and I definitely didn't want to stop listening. Kaeomakana Tiwanak did a good job in narrating this story.

This tore me up

Aaron irked me to no end!! He was well meaning in his intentions for his brother, but he caused more problems for him than solving them. Grant and Kai made my heart hurt, but then they renewed my heart and spirit at the end! The narrator did an excellent job of making it all come to life. Need more!!

I love an m/m mc! The story was fun and quick paced. I really enjoyed the characters and can't wait for the Undertakers story. The characters have the right amount of grit and great sex.

This is a tough one to review. I think I might have liked it more with a different narrator. I think that Kaeomakana Tiwanak's voice for Grant was fine, his voice for Kai was not good. I felt like the boy/sir relationship came out of nowhere. I liked the overall story and will listen to the next in the series. The heat level is a medium and not too angsty.

Unfortunately, I had to DNF at 40%.
I tried hard, but I just couldn’t mesh with the narrator.
Going to give the ebook version a try as the story itself sounded very good