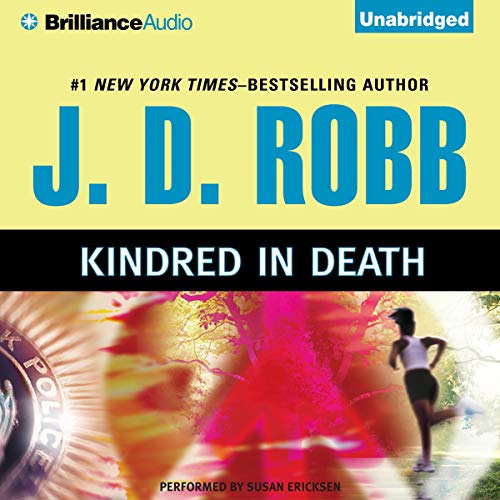 Like the In Death series' lead characters, Dallas and Roarke, narrator Susan Ericksen and author J. D. Robb are a match made in heaven. More than 30 books into this series, these two halves of the perfect audiobook whole have become the gold standard for how to keep listeners coming back book after book.

Erickson's narration has the strikingly confident acting chops of a charismatic lead actor in a great long-running television series. She knows and inhabits her cast of characters decisively, while carefully mining the little diamonds of growth and change that Robb seeds into these stories.

From Dallas' driven, prickly authority, to Roarke's potent charm, to Peabody's nerdy earnestness, and the handful of unique, well-drawn secondary characters, the cast here is entertainingly diverse but hasn't grown too large for listeners to catch on quickly to who's who. And kudos to Ericksen for making it easy by capturing each voice clearly, and using finely tuned pace and timing to bring out all the wit, blood-chilling suspense, and sizzling romance in Robb's storytelling.

Great villains are also a trademark of this series. The bad guy here is a master manipulator, a chameleon who slips and slides through the city, killing with a cruelty that shakes Dallas to her core. Ericksen gives him a guileless menace that rings terrifyingly true. Watch for a terrific 90 degree twist near the end that provides that perfect combination of thrill and 'a-ha!' to round out this plot.

Robb's In Death series is, like all the great police procedurals, built on rich character development. Dallas is sexy, acerbic, absolutely tenacious, and destined to rub people the wrong way. Roarke is drop-dead gorgeous, filthy rich, and utterly in love with his wife. This is partnership as the ultimate romantic relationship, and a crime-fighting team that's unstoppable.

In July 2009 The New Yorker magazine featured a long overdue profile of the immensely successful Nora Roberts (a.k.a. J. D. Robb). So if you're a first-time listener coming to see what all the fuss is about, the In Death series is about to become your favorite new way to kick back and enjoy a great story well told. Nancy Carter

In this novel from number-one New York Times-best-selling author J. D. Robb, the newly promoted captain of the NYPSD and his wife return a day early from their vacation, looking forward to spending time with their bright and vivacious 16-year-old daughter, who stayed behind.

Not even their worst nightmares could have prepared them for the crime scene that awaits them inside. Deena has been brutally murdered in her bedroom, and her body shows signs of trauma that horrify even the toughest of cops, including our own Lieutenant Eve Dallas, who is specifically requested by the captain to investigate.

The evidence piles up, and Dallas and her team think they are about to arrest the perpetrator. But little do they know that someone has gone to great lengths to tease and taunt them, using a variety of identities.

Overconfidence can lead to careless mistakes, but for Dallas, one mistake might be all she needs to bring the killer to justice.

Good book in a great series

Although I'm a real fan of Eve, Roarke and the other characters, this book was more somber than most--a really awful crime, without much of the usual witty repartee that make these books so enjoyable.

Still a worthy entry in the series, and Susan Ericksen did her usual wonderful job as a narrator, really bringing the characters to life. If you haven't gotten into the ID series, this may not be the place to start, but if you're already a fan it's very definitely worth a listen.

J.D.Robb cleverly keeps up the suspense.

After 29 books on the same theme, and roughly following the same format, J. D. Robb still cleverly keeps up the interest and suspense throughout this book. With it's technical banter which she makes either understandable or gives the reader permission to disregard (by being disregarded by the leading character) she gets across the importance of a phenomenally high technology in crime fighting. She uses subtle and tasteful humor, to develop characters and keep up readers interest. The extremely difficult background of the leading character Eve Dallas, deals with the current real life difficulties of many people who go through a negative foster care experience. Exposing the short falls of this very current issue (and several other socially important issues in other books) which need more airing as done in this series, she encourages more societal introspection into this aspects of our culture. She ably deals with the subject of sex both very distasteful,(as done by perpetrators) and tasteful leaving much to the imagination in more acceptable sexual acts, as performed by Eve Dallas and her Hunk, Oh I mean husband. Another theme, that of a very "Tom Boyish" woman working in a traditionally men's world is also well done and will appeal to many women's righters, as does Eve's sidekick Peabody who with her very feminine style also ably gives another face to this subject. With plenty of action, and intricate plot nuances, regular "who done it" fans are kept busy trying to keep up with or guess about the next move. All in all very entertaining and thought provoking.

Love the series but...

I've listened to all of the Death series several times and thoroughly enjoyed them each time. This one is a bit over the top when it comes to the first crime & crime scene description. It almost seemed like the brutality was rehashed and rehashed throughout the book to lengthen the story instead of adding to the plot or suspense.

Loved the book and is a great addition to the series. Loved the series! Each book is a great stand alone piece but reading them in order provides more contenuity and a 3D picture of the characters. It felt like I knew these people personally. Since the setting is only 50 years in the future, a lot of the technology is believable. An excellent escape!

I loved it. Listening to Susan Ericksen narrate is almost as good as watching a movie! She has brought Robb's characters to life for me. I always thought that using my imagination when I did my own reading would be much better than having the novel read to me.That has generally been proven to be correct other than when one of Robb's books is released. MacNab didn't have a big part in this one and I sort of missed his character. I've been looking forward to the release date of this latest episode and now I have already been to the Robb website to find out when the next one can be expected. I highly recommend this series written by Robb if you like mystery and adventure. I also can honestly say that Susan Ericksen really does do the characters justice.

Fans of JD Robb's Eve Dallas and company and Susan Ericksen's naration will be happy to note they are back. Favorite character's voices are spot on, the story is fun, with a few twists.
Fans of the series will be very happy with the book.

This is a well-written story with all the action and excitement you'd expect from a J.D. Robb novel. Always good to catch up with such a great cast of characters. Susan Ericksen is an excellent narrator.

Peabody's coming into her own

I have read most of the Eve Dallas books and listened to them all. I think this book shows growth of character in the Peabody character. It seems as though she is coming into her own as a detective and not just Eve's shadow.

The gathering of information seem to take center stage in this book with the hunt and arrest of the criminal taking a back seat. The initial screw up in arresting the criminal was a good twist and infused a bit of realism in the usually smooth apprenhension plans. I say the book is worth a listen!

Return to form for JD Robb

This book is a return to form for JD Robb. I've been listening to the series in order, and the previous two books were big misses for me. In this book, though, the characters evolved and relationships grew, as in earlier books. I like how Peabody is getting more responsibility and taking more on. She continues to be one of my favorite characters.

It would be my dream come true for Eve to be totally wrong about a case and for Peabody to be the one to solve the case. Eve's infallibility is completely annoying. Roarke being completely perfect is also kind of boring. I love when they have to deal with stuff like babies where they feel out of their depth.

Would you listen to Kindred in Death again? Why?

Yes and I have listened to it multiple times. I love the story and the characters and I especially love the way Susan Erickson's performance. She is amazing.

What other book might you compare Kindred in Death to and why?

This seriew is so geat I can not compare it to any other because it's in a class all by itself.

I always love the scenes between Eve and Rourke.

The daughter of a police captain in killed and he asks for Eve to work the case. This story was all the case we see very little of Eve and Roarks home life which is a nice change. Although we always deal in death the fact that the death was in house so to speak in that it was a cops daughter made it more intense. We saw a little of Roark doing his computer wizardry but not as much as in other books, this book was mostly Eve working and running the case, we also see less of Peabody than in other books as they split up to run different sections of the case at times. A lighter moment was Charles and Lisa's wedding.