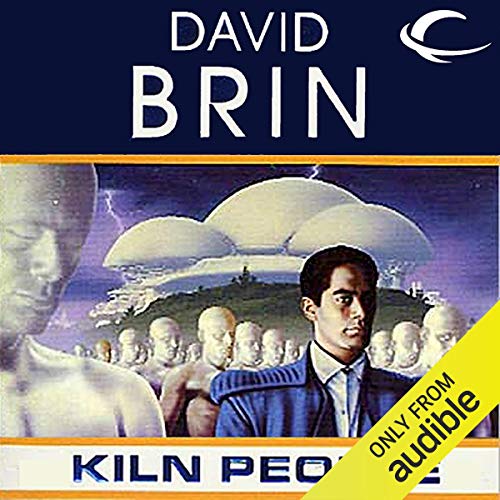 In a perilous future where disposable duplicate bodies fulfill every legal and illicit whim of their decadent masters, life is cheap. No one knows that better than Albert Morris, a brash investigator with a knack for trouble, who has sent his own duplicates into deadly peril more times than he cares to remember. But when Morris takes on a ring of bootleggers making illegal copies of a famous actress, he stumbles upon a secret so explosive it has incited open warfare on the streets of Dittotown.

Dr. Yosil Maharal, a brilliant researcher in artificial intelligence, has suddenly vanished, just as he is on the verge of a revolutionary scientific breakthrough. Maharal's daughter, Ritu, believes he has been kidnapped - or worse. Aeneas Polom, a reclusive trillionaire who appears in public only through his high-priced platinum duplicates, offers Morris unlimited resources to locate Maharal before his awesome discovery falls into the wrong hands.To uncover the truth, Morris must enter a shadowy nightmare world of ghosts and golems where nothing -and no one - is what they seem, memory itself is suspect, and the line between life and death may no longer exist.

Kiln People is a 2003 Hugo Award Nominee for Best Novel.

What listeners say about Kiln People

What would have made Kiln People better?

Could have been quite a bit shorter without losing much of interest. The first quarter of the book sets up some interesting possibilities, but it starts losing steam and re-re-retreading the same ground. By the end, the only way to change things up is to go completely off the rails.

The reading really through me off at first, though I eventually got used to it. Very little flow between sentences, which occasionally took me out of the story. There was very little vocal range beyond "gruff man", and occasionally "whiny man". To be fair, much of the running monologue would have been tough to pull off convincingly for 20+ hours.

If you could play editor, what scene or scenes would you have cut from Kiln People?

Much of the metaphysically-focused climax should have been cut, and replaced with something that played more to the author's strengths and detective story tradition.

I had high hopes going into this book, and for three quarters through, I was able to say that, while it wasn't great, it wasn't bad either. Unfortunately, the last parts were particularly weak, and ended up souring what seemed to be at least somewhat interesting thought experiments from the beginning.

I only read this book once, but I really enjoyed the audiobook version. The reader had good voice separation between characters, and didn't make the female characters sound like a whispering truck driver.

The only thing you might want to do for optimum enjoyment is consider running the playback at 1.25x speed. I started it at 1x and increased it within 10 minutes -- the default speed just seems to drag. At 1.25x, I found it just about perfect.

He created a fascinating world, but the actual story isn't engaging enough. I finished it, but was never engaged, never had any trouble putting it down.

I began this book years ago, but finally got to finish it pretty recently. Even when I started, the premise of the story interested me. I am sorry to say toward the end, the story weakened - mostly due to a rather cliched antagonist. I'm glad I finished it, but don't know that I'd recommend it to others - at least not highly.

Would you consider the audio edition of Kiln People to be better than the print version?

I read the book and equally enjoyed listening to the audio version.

Enjoyed the wonderfully human, vulnerable hero, Albert's greenie and his side kick Pal.

Had potential - Got carried away

What did you love best about Kiln People?

Very interesting setup and playing out of the implications of cloning. However, it seemed to me that it was too committed to making a quite engaging story into some fundamental question about life and the universe and so became way too grandiose.

I am disappointed with this book. it started off strong with an interesting concept, but it didn't last. the metaphor seems to be all that matters, and that goes to far by about the half book mark. I hope you like listening to the protagonist whine, because you get in not just in stereo but full surround sound. the philosophical aspect jumps to center stage and starts to melt into nonsense. I have been trying to finish this book for a month and just don't care enough to get past the last few chapters. buy some pottery instead

David Brin's Kiln People offers a unique future where individuals can make golems of themselves to perform specific tasks based on their 'colors' (green performs routine household chores, while ivory does more analytic tasks, and grey handles dealing with people). The 'standing wave' unique to each individuals allows the golem to function as their authentic 'rig' (original') and the golem has a lifetime of only 24 hours, they can upload their memories back to the rig. The plot revolves around a private detective investigating the case of a presumed accidental death of a famous scientist responsible for golems, but whose daughter suspects foul play. The detective produces multiple golems that go missing, each pursuing or getting mixed up in various aspects of a much more complicated sinister plan (classical mad scientist).

Brin offers a novel concept that combines both science and spirituality into an eminently plausible plot given his underlying universe. At the same time, he addresses the likely divergence of public opinion with religious fanatics against the whole concepts and others wanting more freedoms for golems as well as various implementations of the golem technology. There are numerous plot twists that keeps the story fresh and engaging.

The narration is excellent with good character distinction even among the various golems which is necessary to keep everyone straight. While of moderate length, the pace is brisk, making for a quick listen.

Had the hard copy, couldn’t put it down and still love it.

A shame the movie never made it to film.

Loved this book. Good story, clever plot, good characters, great sci-fi, lots of twists. The narrator was brilliant - took a bit of getting used to but really liked his style. Probably the best book I have ever listened to. quite stunning. won loads of awards for scifi as well.

Brin lost the art of storytelling

Usually I loved David Brins books as they were easy to read. This one is full of far too many ideas without the enjoyment of a story.

Started over twice but couldn't get engaged with the story even though it is an interesting idea. Called it quits after 6 hours.

Narrator did a decent job though.