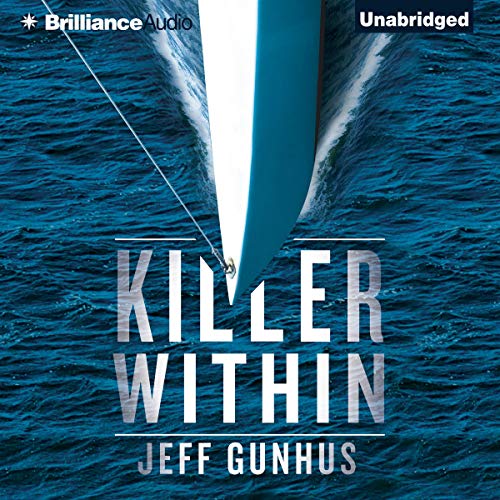 Serial killer Arnie Milhouse may be ready to end his thirteen-year killing spree, but he wants one last victim before leaving Annapolis - and the sexy new photographer in town promises to be his most satisfying score yet. He develops plans to seduce the mysterious Allison by luring her out to sea aboard his luxury catamaran for a secluded weekend he won't forget...and one she won't survive.

But Arnie's latest mark is more than just another pretty face. Allison McNeil has her own secret agenda, and enough insider information to connect Arnie's long string of seemingly unrelated murders. But hunting down serial killers is more than just a hobby for Allison: she's ready to face down her personal demons and take down this vicious predator once and for all.

What listeners say about Killer Within

If you like Mary Higgins Clark this is for you

What other book might you compare Killer Within to and why?

If I didn't know better while listening to this I would swear this sounded like a Mary Higgins Clark book. Good, fast paced with no down time, slightly predictable but thrilling just the same.

Have you listened to any of Joyce Bean’s other performances before? How does this one compare?

Joyce Bean did a very good job narrating this book. With her repertoire of voices the characters are easily distinguishable, including the male voices.

You know who the killer is from the beginning but there are a few scenes and characters you know are making some really bad choices setting themselves up as the perfect victim. With trepidation they walk right into a trap. Some of them you really want to survive. The book does require some suspension of common sense as far as law enforcement procedurals go but this is fiction and is entertaining, definitely worth the price. I would recommend this and will probably read more by this author.

Average thriller with some standard twists

This thriller about a cat-and-mouse game between a serial killer and a hot FBI agent was an okay, fast-paced story, but the writing and execution was strictly average, in my opinion, and while I appreciated the local details about Annapolis and DC, I found too much descended into cliche and the main characters picking up the proverbial Idiot Ball.

The Killer Within opens with the antagonist, Arnie Milhouse, who is just an average schmuck with an abusive junkie nightmare of a wife and a son who is the only good thing in his life. Arnie is making a stop at a convenience store on the way home to his life of miserable, quiet desperation, when he is caught in the middle of a hold-up. In an unexpected turn of events, he ends up killing the stick-up guy, and then decides he enjoys it so much, he also kills the kid behind the counter.

This gives Arnie a taste for blood, and thirteen years later, we discover he is a veteran serial killer. He used the insurance money from his late wife (yup, she became "late" very soon thereafter) to build a business empire, and he's gone from zero to hero — rich, successful Alpha Male who kills and tortures prostitutes and the occasional bystander for fun.

I did not find Arnie's psychology very convincing - someone doesn't just "snap" and go from ordinary schmuck to sociopathic killer just like that. Additionally, if he was truly a sociopath, he wouldn't be so attached to his son. But let that pass as our required suspension of disbelief.

The main character, Allison McNeil, happens to meet Arnie while on a freelance photography assignment in Annapolis. We quickly learn Allie has her own history, and her meeting with Arnie was not coincidence. There is a whole subplot about how Allison was a cadet at the US Naval Academy before she was raped by one of the faculty, who of course was never punished and Allie was blamed and everyone in the USNA hierarchy closed ranks against her. Which sounds like a believable plot from the 1980s or so, but not so much nowadays, when sexual harassment is very much on the minds of the top brass and it's quite unlikely that every single officer Allie talks to would blame her and let someone known to be a serial offender keep raping female midshipmen. I'm not saying rape and harassment isn't still a problem in the military, including at the academies, but the staff in charge just cannot afford to follow the cartoonish "blame the victim" script we see in this story. (It's never even mentioned that even if they think Allie was lying about being raped, then sexual fraternization with a member of the staff would still have been a huge violation for her and for the NCO in question.)

But anyway, the rape subplot is not the main story. The main story is Allie trying to trap a serial killer. There is a lot of cat and mouse before the inevitable confrontation out on Arnie's boat, a bit of a twist where we learn another important detail about Allie's past, and a setup for a sequel, so obviously the author is hoping to make Allison a returning character.

Entertaining enough for a quick listen, but I found Allison to be too much of a cliche, and I didn't really like any of the supporting cast much either.

Story was a little slow getting started but a really good listen after you got into it a few chapters . Narrator was also very good and easy to listen to.

The whole story was just ehh. Nothing really exciting. The killer was the most exciting character in the whole book and he was only mildly entertaining. I found myself yawning a whole lot during the book. Did not go back and listen to the parts I had missed. Give two thumbs up for the ending, excellent vindication & a big dose of up yours!

What a horrible man. What a horrible way to think he is a man. The very first man he took care of deserved it. The wife was trash but he coulda just left her. Not sure this is how serial killers are made but I can see a weak creep thinking this is what makes him powerful. That is just a bully. In the end that is all he was ... a bully.

The language is terrible. The story is disgusting. Do not waste your money or time on this one. I couldn’t even finish it.

Decent read and a good narration..


So, Allison kneed Charlie in his privates when he tried to kiss her. Really? What was the point in that? She couldn’t have just said no? And why was that part, as well as the accident, even part of the book? And, OMG, why was every street and tourist trap described? Everywhere Allison ran we had to know what street, avenue, boulevard, pkwy, cul-de-sac or alley she was in or on. It was totally stupid. Either the author is from Annapolis or he did some serious research.

This was in no way a mystery. You knew right off the bat who the killer was, Arnie, and you also knew that Allison was after him. You didn’t know exactly why she was after him just yet, but you knew the reason why was coming. Oh, and yeah, eventually he planned to teach his 13 year old son, Jason, how to kill. (Something to look forward to in the poor kid’s life.)

Overall, it was a decent story. I mean, Arnie had some really horrible ways to kill people. And I would have enjoyed that IF one of those people had been Craig Gerty, the man who’d raped Allison when she was 19. But, she took care of that near the end of the book.

I liked Charlie, most of the time. He was 21 and had a crush on Allison and they ended up as friends. Richard, her ex-boyfriend, who she still had feelings for seemed very protective of her but he wasn’t really in the story long enough to see what might happen.

This could have been a much better book, if the author had just kept to Allison trying to trap a killer. Instead we were shown how weak and frightened she was, how she almost went catatonic when she ran into Gerty, how she screamed like a banshee when she saw him on the street, how she got lost in what was going on around her when she would relive the rape. THAT took up too many of the pages of the story that was supposed to be about a serial killer. Write a book about rape or write a book about a serial killer, but not both. From chapter to chapter you had no idea which part you were going to read about. The last 25% was the best of the book, which was a real bummer.

As to the narrator: Joyce Bean did a great job on the voices and read with emotion. I can’t ask for more than that.

.... up until the the last hour, hour and a half, when it really takes off.

In the beginning of the book, the author worked hard to increase his word/page count by detailing the exact routes the protagonist took on her regular runs. While this might be of interest to locals, it wasn't especially compelling to anyone not familiar with the area. Most of the rest seemed boilerplate, sort of standard fare for this genre.

The last part was worthy, however. Good tension, even with a predictable ending.

every time I thought I knew where this was going I was wrong. I like a book that keeps me guessing