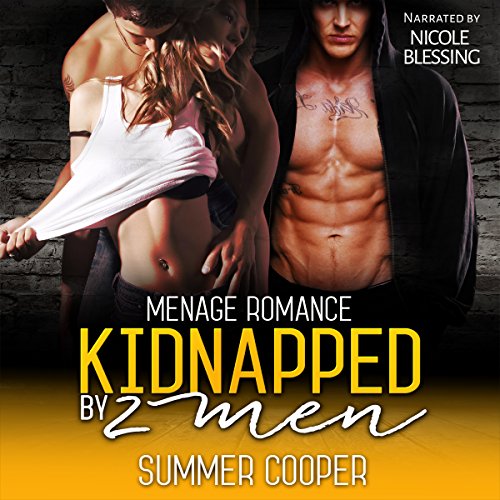 We share everything, including women. We like our sex fast and hard. Women come and go in our lives, because of what we do...the bad thing that we do....

Taking her was a mistake, she wasn’t supposed to be there. We don’t know what to do with her now, because the only thing we can think about is f--king her brains out...together. But it was wrong! Not only did we take her against her will but she’s a virgin.... And for the first time, we want more than just a quick fix.

What listeners say about Kidnapped by 2 Men

should make it a movie!

from start to finish, all I could think was what an awesome movie this would make! Loved it!

I enjoyed this novel. With action, suspense , and steamy scenes this story will hold your attention until the end. It was a quick and enjoyable read. The narrator Nicole Blessing did an awesome job with the story and she was able to bring the story to life. I enjoyed it.

Ok... I was lost when I read this book. This is my 1st time reading a book from this author, and I'm hoping that this book isnt a reflection of her other works. I felt the story was so absolutely unbelievable that it bordered on ridiculous. A 24 year old virgin secretary works for a boss that she had fallen in love with. Her boss wasnt a good guy, but she didnt know that he was a very bad guy in his business dealings. The other women in the office were talking trash about her, and starting rumors that she was sleeping with the boss. This was not the case, although she fantasized about it daily. He asked her to come to his home, and work with him one evening. She goes, he gets a call and jumps up and leaves the room. She has no idea why until these masked men bust in. Her boss left her there, and went upstairs to his "safe room". Basically he left her there to get killed, raped, or both. He apparently had the foster mother, father, and sister of these two hitmen kidnapped. This is where it gets plain silly.... the hitmen are brothers that were raised up in a cult that they escaped from together when they were younger. Some rich lady (kidnapped foster mother) sees the news report about them escaping, and they are adopted by her and her rich husband. There seems to be some mafia type activity over the years, and the two hitmen grow up in this lifestyle, and they are loyal to the "family". I'm soooo lost...

I was so lost by the 4th chapter that I started to just end it, and return the book. But like a car wreck...I had to see what happened next... OMG...the secretary ends up being taken by the two hitmen, while her boss is tucked away in this safe room. There is a sexual attraction between the 2 men and this kidnapped virgin secretary from the start. Which is so unbelievable that it actually irritates me. She is such a virgin, that she is masturbating and dreaming about these two men while in captivity. They of course have shared many women in the past, but for some unknown reason...she is "different", and the "one" for both of them.

There is some kissing, fondling...etc.. but no all out sex. The boss ends up getting out of the safe house, and brought to where they are keeping the secretary and they tell him that another "family" wants him, and he can either tell them where their kidnapped foster family are or they will turn him over. He does, the family get rescued and the blood son of the foster family is running the "family business", and he let's them leave the "family" with his blessing. Oh...did I mention that while the hitmen had her with them they catered to her. Bought her clothes, sexy lingerie and cooked meals for her. OMG!!! THAT WOULD NEVER HAPPEN!!!

Still at this car wreck of a book... I continue listening. They tell her that she can leave, but she doesnt want to. The night before she is allowed to leave, the two men come to her room, they take the kissing to the next level, one tries to penetrate her and discovers that she is a virgin. These hitmen have such great morals that they dont want her first time to be in a dump house, while shes their hostage. She "deserves better".. LMAO!!

I am hoping beyond hope that it gets better... but it doesnt. After she leaves, she goes back to the house where they held her to try and find them. She discovers that she cant live without them..."Stockholm syndrome much"..???!! The house is boarded up, she leaves, and aches for these men for weeks later. After the men are released from their "family duty", they go back to find her, with the information that the mafia head guy gives them about her location. She's walking down the street, they pull up in a van, snatch her, and takes her to their penthouse. Kidnapping #2!

One thing leads to another...and she is finally "de-flowered". She is so pure that she doesnt know how to perform oral sex, but she gets it right the very first time! They are all so happy and in love until she gets a package of pics that shows the guys in various situations of "hitman business ", and she takes off for Alaska! Seriously?? So she thinks these two hitmen, kidnappers aren't violent, and dangerous because they werent wuth her?! GIVE ME A BREAK!!

Yes...you guessed it...they look for her for weeks, get a lead on her being in Alaska in the hospital after fainting from a pregnancy that she doesnt know about, hits her head, and passes out with a skull fracture! There is no need for surgery on her SKULL FRACTURE, because shes pregnant and they dont want to harm the baby. PLEASE STOP!! The guys fly there, she finds out she's pregnant and the rest is history... the baby belongs to BOTH men... because they want the 3 of them to be a family... Seriously?

I will more than likely return this book. The storyline was ridiculous and so far fetched that I laughed at it from Chapter to chapter! I've read plenty of books like this in the past, and the storylines flowed, and the sex scenes were hot! One thing I will give the author, the sex scenes were hot, but the rest of the book was crazy. I'm giving it 1 star. I'd give it less, but that isnt an option.

Oh...the narrator was horrible! Her male voices were terrible. I would have preferred to hear a male doing a female voice, like Michael Pauley does in other books, rather than to hear her pretending to be the men. I wanted to scream, but since I was driving while listening to the audible version..I didnt want people to think I was losing my mind...which wasnt far from the case!!

I've never returned a book before, but this one will most DEFINITELY go back on the shelf!!

loved it. actual story line. Dislike if no actual plot.Story just long enough.
worth the time and money.