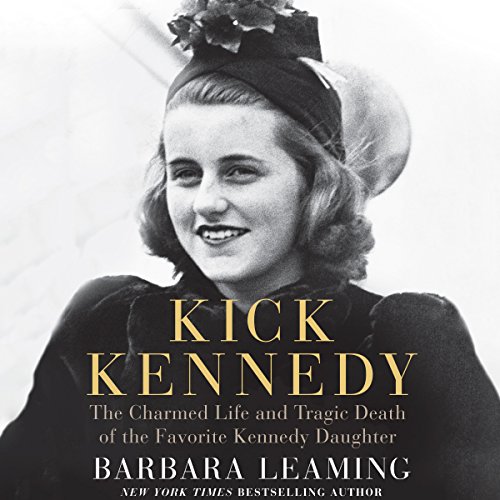 The Charmed Life and Tragic Death of the Favorite Kennedy Daughter
By: Barbara Leaming
Narrated by: Eliza Foss
Length: 10 hrs and 17 mins
Categories: History, European
4 out of 5 stars 4.0 (2 ratings)

Kathleen "Kick" Kennedy was the incandescent lifeforce of the fabled Kennedy family, her father's acknowledged "favorite of all the children" and her brother Jack's "psychological twin". She was the Kennedy of Kennedys, sure of her privilege, magnetically charming, and somehow not quite like anyone else on whatever stage she happened to grace.

The daughter of the American ambassador to the Court of St. James', Kick swept into Britain's aristocracy like a fresh wind on a sweltering summer day. In a decaying world where everything was based on stultifying sameness and similarity, she was gloriously, exhilaratingly different. Kick was the girl whom all the boys fell in love with, the girl who remained painfully out of reach for most of them.

To Kick, everything about this life was fun and amusing - until suddenly it was not. For this is also a story of how a girl like Kick, a girl who had everything, a girl who seemed made for happiness, confronted crushing sadness. Willing to pay the price for choosing the love she wanted, she would have to face the consequences of forsaking much that was dear to her.

Best-selling and award-winning biographer Barbara Leaming draws on her unique access to firsthand accounts, extensive conversations with many of the key players, and previously unseen sources to transport us to another world, one of immense wealth, arcane rituals and rules, glamour and tragedy, that has now disappeared forever. It was a world of dukes and duchesses, of grand houses, of country house weekends, and of wild rich boys. But it was also a world of blood and war and of immeasurable loss. It was a time of complete upheaval, as reflected in the life of this most unlikely and unforgettable central character. Kick Kennedy reveals her story - that of a young girl learning about love, sex, and death, and doing it all at warp speed as the world races toward war and then reels in the war's chaotic aftermath. This is the coming-of-age story of the female star of the Kennedy family and ultimately a tragic, romantic story that will break your heart.

Not what I had hoped for.

I have read other books about her in the past. This one portrayed her as fairly self-centered as well as self-absorbed.

The narrator was awful. Each mispronounced word made me cringe. One in particular was the word "clique" which she repeatedly pronounced as "clack". I can't even write down the way she destroyed the work "apocalypse" - it was bizarre!

Interesting Bittersweet Story. Worth The Listen

If you could sum up Kick Kennedy in three words, what would they be?

The dulcet ebb and flow of her voice kept the story moving and continuingly interesting.

No. I listened to it while power walking over several days.

A great listen despite already knowing the tragic ending.

One more mention of hence, heretofore, or another marchioness would have put me over the proverbial edge. This repetitive slight story was obviously written to capitalize on the mystique of the Kennedy name. Don't waste your time.

Would you listen to Kick Kennedy again? Why?

Yes. I learned so much about the hx of WWII and the politics. I also love to read about the Kennedy's, one of my families.

What was one of the most memorable moments of Kick Kennedy?

Her times with her brothers.

Have you listened to any of Eliza Foss’s other performances before? How does this one compare?

I have not heard her before but will be looking for other books she reads.

I couldn't wait to go to work and come home from work to listen in the car.. both laughing and crying.

What disappointed you about Kick Kennedy?

Mispronounced so many names and places. Reader obviously does not know anything about Britain then or now.

Has Kick Kennedy turned you off from other books in this genre?

No not at all.

Would you be willing to try another one of Eliza Foss’s performances?

Kik Kennedy was not a very appealing person. Rather shallow and not that interesting.

A bright light, extinguished long before her death!

Well written, thoroughly enjoyed listening! I must say, I’m left saddened and disillusioned by the cold, calculating relationship of Rose Kennedy especially and to some extent Joe Sr. with not only Kick, but what appears to be a general theme with in the family unit. Kick, it’s evident, was a bright star whose emotional light was continually extinguished by a narcissist mother who enjoyed the adoration and loyalty of Kick but cared little for her daughter to reach her own fullest potential if that deviated in any way from Roses well scripted illusion of the perfect Roman Catholic family. This well researched and richly detailed book,has left me thirsty for more about this storied family? Well done!

I hesitated to purchase this book after reading some of the less favorable reviews. I'm glad I decided to make up my own mind.

One reviewer thought the book portrayed her as self-centered and self-absorbed. I thought she sounded like a fairly typical young, single woman. Maybe a little entitled because of the money and prestige she was born into, but I don't feel we should form a definitive opinion of someone long gone from this earth based on a book. Yes, the author interviewed those who knew her and that lends itself to some credibility, but hindsight is 20-20 and memories can be colored.

As for her marriage and affair, the truth is we can never know with any certainty what happens behind closed doors. Because so much is public about a celebrity's life, people tend to think they know the person. Probably not. I've been on a Kennedy reading quest and I've learned enough not to be too envious.

Kick was raised in a family where the parents don't appear to have been in the same house at the same time for any length of time, yet she had values regarding religion and premarital sex that she appeared to stick with until the death of her husband.

As for mispronunciations, I caught a few, but can't speak to all of the mistakes that someone from England would notice. That is disappointing (English locations) as I like to think I can learn pronunciations from listening to books that I can't get from reading print. I'll be careful to get those elsewhere so I don't make the same mistakes myself.

Eliza Foss' narration makes the story interesting, and it was exciting to hear the history of Chatsworth, it's lineage and also its similarity to Jane Austen's book, Pride and Prejudice, as Chatsworth (Pemberly), the Fitzwilliam dynasty, and the name "Georgiana" are part of both stories. The 2008 version of Pride and Prejudice will it's special features will be viewed with more interest now.

Loved this book. So very interesting with lots of history but also the memories of those who were there & loved Kick. My mom is going to listen to next.

Narration left a lot to be desired

Fascinated by all the Kennedys so couldn't wait to buy and listen to Kick Kennedy, unfortunately narration was absolutely terrible and it was a struggle to get through the book, in fact I didn't, really disappointed

Once you get used to the fact that the narrator will miss pronounce place names - ala Melbourne - it's a good listen.