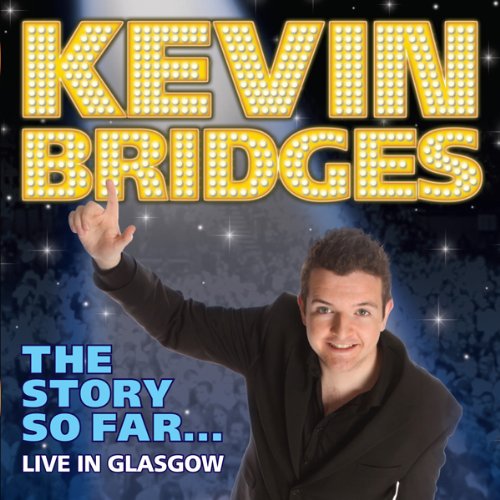 Kevin Bridges - The Story So Far…Live in Glasgow

Kevin Bridges - The Story So Far…Live From Glasgow is the debut from the UK’s fastest rising comedy star, recorded in May 2010 at Glasgow’s SECC arena in front of a sold-out crowd of 10,000 fans.

At the age of 23, Kevin, Scotland’s ‘Young comedy prodigy’ (The Guardian) has followed a meteoric path, from his appearance on BBC 1’s first episode of Michael McIntyre’s Comedy Road show to starring at Channel 4’s Stand Up for the Week. Other TV appearances include Live at the Apollo (BBC1), Friday Night with Jonathan Ross (BBC1), Have I Got News for You (BBC1), Mock the Week (BBC2), 8 out of 10 Cats (Channel 4), and Channel 4’s Comedy Gala in Aid of Great Ormond St Hospital (Channel 4).

Kevin’s unique brand of social commentary, astute observations and sharp one-liners arguably make him the hottest act to come out of Scotland in the last 10 years.

Funny as. Best 80 minute car journey I've had in a whileI. Just buy it.

Great show well worth a listen .fully reccomend to all to have a listen

liked this one hes funny will definetly listen to more of his live shows. as i enjoyed this one

Superb. I cried with laughter

Excellent material, well told. I haven't lived in Glasgow for years but this made me miss the city and the batter so much. Kevin bridges has phenomenal talent - for being so young, I can only imagine how good he'll be when he's been doing this a decade or so.

Great Scottish humour with stories most people will relate to. Bridges has an excellent way of delivering humour.

Straight copy of the DVD

I was a fan of the DVD and just needed something for a long drive.

If you like Kev.i.n's standup then obviously you'll be a fan.

Good quality, does go quiet occasionally when he gesturing to crowd but nothing you can't work out what's going on

Laughed through the whole recording...loved every minute of it. Kevin Bridges is a remarkable talent.

Kevin Bridges is undoubtedly one of the funniest guys alive. Anyone from the UK especially will appreciate his sharp humour and I really enjoy his effortless joke telling.
However, I would recommend watching this on youtube rather than buying the audiobook - go for We Need To Talk About... Kevin Bridges instead rather than just the audio of a tour video. That aside, it was still class.

Not Kevin bridges at his best: I like Kevin but this isn't as polished as some of his work.