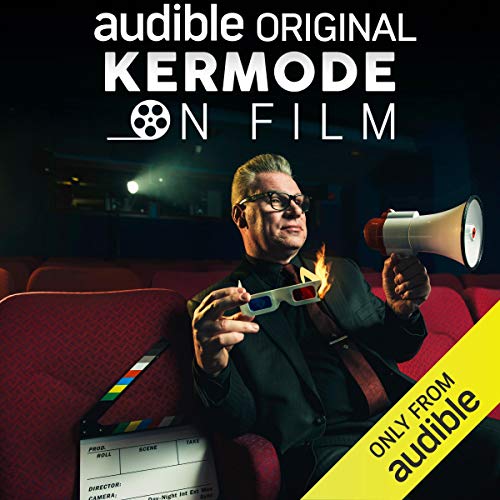 Mark Kermode - the UK's pre-eminent film critic and cultural observer - delivers opinion, analysis and his trademark rants on all things cinematic. Presented with intelligence, humour and unrivalled depths of knowledge, Mark delivers a series of high profile interviews, compelling lists and must listen to reviews from the movieverse.

The Kermode On Film cinema presents a rich and varied bill of cinematic entertainment:

Settle down with your popcorn... and welcome to Kermode On Film.

This is an Audible Original Podcast. Free for members. You can download all 15 episodes to your Library now.

What listeners say about Kermode on Film

These are excellent - and the set up of the various programmes suggests many more to come. Yes please!

Excellent - Will there be more?

Setup of this indicates that it will be an ongoing series, but there has been nothing new since Feb 2018.

As a long term listener of the Kermode and Mayo Five live 'Wittertainment' radio show, I was looking for a shorter, sharper fix of the Doctor's critical wisdom. He is funny, wise and an insightful commentator. Here we get a range of show formats:
* 'Listomania;' as it sounds, an exploration of various movie themed lists, including for example John Hurt's best films, Jesus films, etc.
* One on one interviews with e.g. Barry Jenkins, Duncan Jones
* Hell's Video Store (my favourite): really humdingers of rotten tomatoes
* 2001 films you must see before you die: as it sounds
* And some shows that were recorded live at the BFI, with various guests.

It's a good mix of formats, which keeps things fresh. They are bite size, 25 minutes in length, more digestible perhaps than the epic 2 hour Five live shows, and more focussed on movies.
But at 15 shows this is a short run, these formats could run for much longer. How else are those 2001 films going to be covered? So, hoping we'll get more.

That listeners letter with question on. "They are releasing too many movies these days. wouldn't it be nice to just say STOP for a year. and watch all the old ones finally? Feels weirdly prophetic now!".. 😄

Enjoyable for a film buff

I enjoyed this small set of podcasts from Mark Kermode whose knowledge of film is vast.

Mark Kermode tells it as it is.

I enjoyed the review very much. I will ensure that i stay clear of the film.

Good but the lack of visuals are frustrating

I very much enjoyed listening to this and in particular the interviews, however I can't understand why they picked some, clearly, very visual clips for the live specials that don't work on a podcast at all. These should have been edited out really. Overal though it's very good

Great podcast with lots of different features. Still have about 1997 movies to see before you die, so please make more.

These podcasts are fantastic; really entertaining, informative and funny. The only downside is, as others have alluded to, that there have been no new ones for months now.