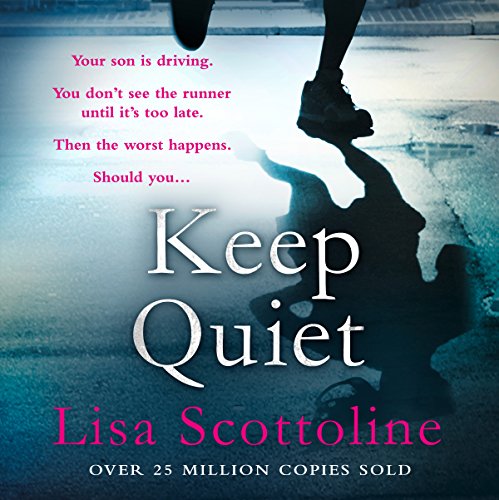 One decision. One family's future in ruins.

When Jake Buckman decides to let Ryan, his 16-year-old son practice driving home along a deserted street, he has no idea of the deadly consequences.

But in the darkness of night, a runner comes from nowhere and the hit is fatal.

Now Jake and Ryan have two options: admit Ryan's responsibility...or drive home as though nothing happened. What follows is not a clear-cut hit and run, but a split-second decision by a father who will do anything to protect his son.

How much should a parent sacrifice for their child? And could any family survive the burden of such a terrible secret?

"Lisa Scottoline walks readers into this charged moral dilemma and then takes them on an intense, breathless ride" Jodi Picoult

What listeners say about Keep Quiet

Totally loved this nail biting read but I felt it finished quite abruptly. The only thing that spoiled it a bit for me was the narration. Ron Livingston speaks really fast at times and can come across as bored when rushing through certain sections but overall a great addictive read.

Absolutely first class edge of the seat thriller- keeps the tension up right to the end. I couldn't put it down, in fact I lost sleep, being so totally engrossed in the story I kept thinking, 'just one more chapter,' as time rolled on. Narration was perfect, contributed wonderfully to the overall listening experience without dominating it. Fully recommend this book!

Predictable & totally unbelievable ending.
Started off very well but so much repetition. I feel this story could have been told in half the time.
Truly wanted to like it & there was so much promise but just didn’t live up to it for me.

Love this. A new author for me. Really enjoyed it and I'm looking forward to hearing another