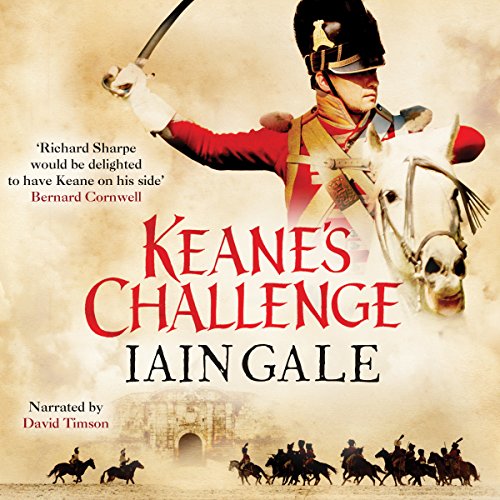 The Iberian Peninsula, 1809. French troops led by one of Napoleon's best generals are amassing on the border. Wellington's outnumbered force and his unreliable Spanish allies need to pick off the smaller French units if they are to stand their ground.

For that they need information: accurate intelligence on numbers, arms, and whereabouts. That's where Captain Keane and his company of reformed scouting officers are invaluable tools--despite being unpopular with the regular soldiers.

But it soon becomes apparent that someone high up in Wellington's headquarters is a spy for the French. Only someone able to travel widely outside the camp, someone privy to battle plans, could be the double agent--and Keane's enemies within the army are quick to point the finger. Keane must defend his crew against their accusers or root out the traitor himself.

Keane's Challenge draws a fascinating picture of a disparate group of men brought together in a Peninsular War adventure that sees maverick hero Keane ride again.

What listeners say about Keane's Challenge

I am warming to this series and I found this book a more enjoyable read than the previous one. The characters are developing nicely and gaining depth while the story is largely well-paced and this time offers additional intrigue. It's important to note that this really isn't just "another Sharpe", Iain Gale has found a fascinating niche with his main character having gone from being a soldier of the line to a guide or intelligence officer. Spy to you and me.

This gives the author some considerable latitude for the plot of these books and I think it's fair to say that he pushes the bounds of that considerably more in this second volume. It's an entertaining book and given the variety of character backgrounds and accents David Timson does a very credible job.

It's not perfect though by any means and in pushing the boundaries the author does stretch credibility just a little too thin at times and I would like to have seen more time devoted to the major set piece battle.

If you do need high levels of realism this book delivers with some intriguing insights into the period, especially communications this time, but you will have to forgive the plot for perhaps skating on some pretty thin ice for much of the final quarter.

OK so it's a bit boys own, a bit like Sharpe and a bit lacklustre in parts but all told a nice easy listen well performed by David Timson.

these are excellent books, written well with impressive characters and storyline, and narrated very well. But Keane is no Sharpe, and Gale no Cornwell, though after reading 20+ of Sharpe these are worth the listen, for after all the allies kicked a lot of French ass

No Sharpe, but his own man.

I was a little sceptical when I first began the series, as the format follows Sharpe quite closely. But after finishing this second instalment in the series, It's distinct enough to stand up to be a well worthwhile listen. The story moves along at a pace, the narrator is easy to listen to, and the characterisation of Keane and his men kept me interested.
Recommend.

Absolutely loved this book Well read and a great story. Keene is my new favourite hero

I enjoyed this book due to the story send its connection with history. It was very well read and easy to listen to! Finished all too soon!