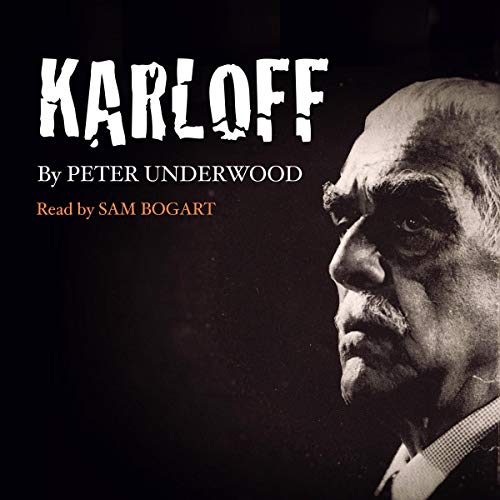 Karloff: The Life of Boris Karloff

Boris Karloff was the most famous of all horror actors. His memorable portrayal of the Frankenstein monster added a new word to English dictionaries. This new edition of the first biography (published in 1972) - containing a new foreword by Eric McNaughton as well as a special piece about the book by grandson Ben Underwood, reveals that Karloff was not born at Dulwich, London, as stated in all the reference books.

People have been traced who remember young "WHP", as he liked to call himself, when he played his first stage part, and in this fascinating story there are many delightful examples of the quiet, unassuming, and lovable Billy Pratt before he received a legacy from his mother and tossed a sixpence to see whether he would emigrate to Canada or Australia. Canada won. In 1909 he sailed from Liverpool. The book tells of his hard, impoverished life in Canada before answering a chance advertisement in the name of Boris Karloff, Karloff being a distant family name, and of his eventual touring of western Canada and the northern States of America.

In 1917 he found himself in Los Angeles - in a district with the magic name of Hollywood. We follow Karloff's career from stage work to his early films. We learn of his classic creation of the screen monster Frankenstein: the origin of the story; the casting of Karloff; the conception of the unforgettable monster make-up; the filming; the preview and the overwhelming success of this most famous of all horror films. Then came the aftermath of Frankenstein and the success story of Karloff in such memorable films as The Mummy, The Mask of Fu Manchu, the banned Devil's Island, and the haunting The Body Snatcher: scores of films of all kinds with little-known facts and side-lights on many of them, right up to the moving performance he gave in Targets.

What listeners say about Karloff: The Life of Boris Karloff

I've waiting a LONG time for an audiobook about Boris Karloff. I was super excited to get this one. After Ten minutes I had to shut it off. So disappointed. The narration is GOD AWEFUL and ALMOST as irritating as Cathy Dobson. Please rerelease this book with Scott Brick, Stephen Hoye, or Robertson Dean narrating. PLEASE