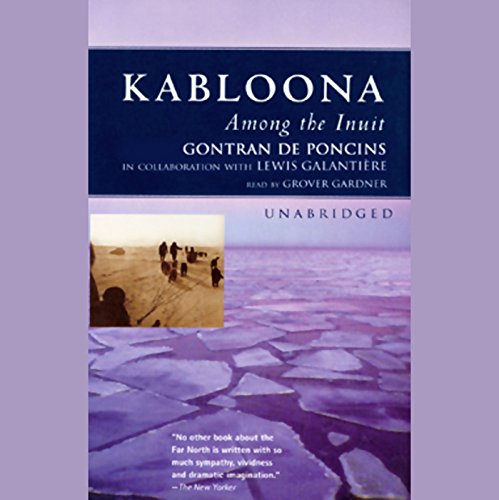 Kabloona is a true story of a journey into the North. This extraordinary classic has been variously acclaimed as one of the great books of adventure, travel, anthropology, and spiritual awakening.

In the summer of 1938, the Frenchman Gontran de Poncins traveled beyond the "Barren Lands" north of the Arctic Circle to Kind William Island, an island of 10,000 square miles. The entire population of the island consisted of 25 Eskimos, their primitive lives untouched by the civilization of the white man.

For 15 months Gontran de Poncins lived among the Inuit people of the Arctic. He is at first appalled by their way of life: eating rotten raw fish, sleeping with each others' wives, ignoring schedules, and helping themselves to his possessions. But as de Poncins' odyssey continues, he is transformed from Kabloona, The White Man, an uncomprehending outsider, to someone who finds himself living, for a few short months, as Inuk: a man, preeminently.

What listeners say about Kabloona

I was looking for something specificly about the life of Eskimos, and I was lucky to find this title. Just what I wanted: a thorough account of a Westerner's journey into the Arctic, a detailed description of the Eskimo way of life and way of thinking, by a man who lived for 15 months as one of them, not just as a traveler. Not 1 superfluous word. Everything is informative, enriching, and very clearly written. The book is never boring. I also found it to be spiritually enlightening; an insight into a different outlook on life. The author visited the Eskimos in 1938 but I'd guess life in these regions has not changed much.

The narrator is also very good.

I enjoyed every minute of this fascinating adventure. His attitude toward the Inuit is less than enlightened (which is not a surprise considering when it was written), but his descriptions of the people and their culture are unsurpassed and never dull or boring. You will want to drag out your map and track his adventure like I did.

Adventure at its best

I could not put this down. A fascinating tale that made me want to find out more about the author and the subject. The former has written other books thast I have now bought and read as a result of this talking book. A very well worthwhile listen!

I enjoyed every minute of this true story and feel it is very relevant despite being written so long ago. I particularly enjoyed seeing the author transition from someone who barely considered the Eskimo as human to someone who gained an understanding of their culture and ways and even began adopting their behaviors as his time among them increased.

With all our political correctness, this is a book that could never have been written today. We would not have been able to really know the whole journey of de Poincins, which is a requisite part of the story.
Very enjoyable and informative and I do recommend it!

This book is certainly very politically incorrect but this is what makes it precious. French aristocrat and anthropologist
Contran de Poncin spends a year with Inuits in 1939, sometimes living with them at the very remote locations where almost no white man ventured before.
He tells about his experience and feelings frankly and excitingly and, as it often happens when different mentalities and cultures collide, his impressions range from disgust to admiration. And a transformation that gradually happens in him is not less interesting than his descriptions of the life of Inuits.

Very lively, profound audiobook. Was amazed by the depth of the narrative.

This book is one of the best nonfictions I have ever read. It was funny and I was sorry when it reached it's end. The narrator was great and the story that Poncins told of his life with the people of the north was amusing and truly shoed how much we still have to learn from different cults all around the world. I liked the message that came to me while reading this book and it was that happiness and enjoyment don't always come in the form in which we expected.

A little slow in places but worth the read.

I persevered through several places but overall it was a charming and enlightening experience. I gave it a 4.

The exploration of the inuit was fascinating, even if a little too graphic (guts and all) at times, but I really liked this and I don't often read this type of material. Worth every penny and makes up for the book "so called picked by audible experts list" where a book or choice is too often wasted.

I'm all for allowing for historical context but...

I was not as mesmerized as most listeners although I will say the descriptions of Inuit life are incredibly detailed and give vivid pictures as well as including the author's views on why he finds most aspects incomprehensible, even if admirable.
But I was still bothered by the pronouncements such as "the Eskimo does not think..." or referring to one man's " ...mind - if one can call it that." Even for 1938, these comments don't seem worthy of an anthropologist who voices that he understands that he does not understand!
This aspect and the narration which I didn't care for, made me start looking forward to the end. Therefore, a three.

A spiritual journey indeed. A brief insight into the world of the Eskimo. Beautifully written and narrated.