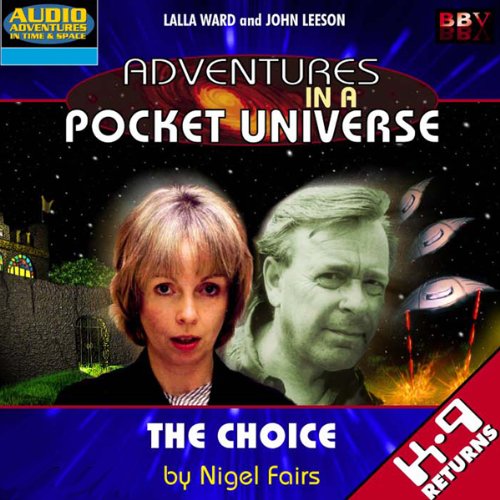 After successfully opposing slavery in the pocket-universe of Ecto-Space, K9 and his Mistress are treated to a life of luxury as the revered guests of Emperor Lukor. However, a life of decadence soon pales for the travellers and after making a hurried departure, they discover a society of diseased cave dwellers who are dominated by their unseen masters who they worship as gods. Experience tells the Mistress and K9 that things are not all that they seem, and in a bid to unearth the truth, they place themselves in deadly peril.

What listeners say about K9: The Choice

An interlude story set between Old and New Series.

This is an interesting selection for Doctor Who fans. Not exactly canon, but it's a fun listen. I was pleased to see that Audible had these available and purchased both titles. About twenty years ago BBV released two audio titles set in a sort-of-familiar universe, but for licensing - or lack of it - reasons, a few things needed to be different. - K9 had a valid dog license, so had no issues. - Rom... err... The Mistress was along for the ride. - And they were traveling in a Pocket Universe known as E..cto-Space. That said, there were two stories released and each ran about an hour. The first story was "The Choice" and the second/last was "The Search". The unmentioned backstory takes up from the last moments of "Warrior's Gate", where K9 mentions he has all the information stored in his data banks to build another Tar... err... Time and Space Traveling Device. K9 and The Mistress have successfully liberated the Thar... err... some oppressed people, and are now presumably trying to get back to N...ormal-space. They just need to work the bugs out of their new Ride. As only two stories were ever produced, who knows if there were plans for the Intrepid Two to eventually return to the home planet of The Mistress where she might decide perhaps to run for President? Also makes me wonder if the reason the latest incarnation of The Master was dubbed Missy since "The Mistress" technically had been taken in 1999? These titles aren't that expensive, and if you are a fan of Classic Doctor Who these two titles are a good way to spend two hours.

this is no big finish

meh, it killed an hour. nothing more nothing less.

Would you ever listen to anything by Nigel Fairs again?

This feels like it's part 2 of another story. There was no introduction or explanation for where the characters were, how they got there, why they were there. I was lost from the beginning.

This felt like it was written by someone who had heard of Doctor Who but has never actually seen an episode before.

Have you listened to any of John Leeson and Lalla Ward ’s other performances before? How does this one compare?

they are both fine/ excellent as performers (duh!) sadly they were both wasted in this story.

stick with the big finish doctor who productions. They never disappoint.