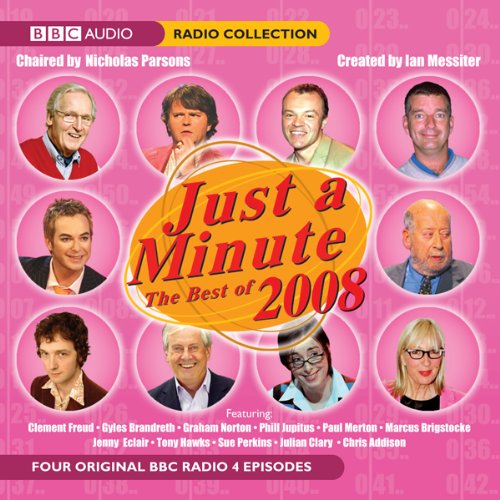 Four of the most sparkling editions from recent series of the ever-popular Radio 4 comedy panel game, chaired by Nicholas Parsons with regular players Paul Merton and Clement Freud, joined by a host of guest players.

Among the subjects hilariously tackled are The Scottish Play, The A to Z, An Infinite Number of Monkeys, Leonardo da Vinci, The Famous Five, Discovering America, Adam's Apple, The End of Time, and Little Green Men.

What listeners say about Just a Minute

Just a Minute provides light entertainment and is a great accompaniment to driving, ironing, doing your paperwork etc. because you don't have to concentrate too hard on them. The audiobooks tend to be pricey for what they are but this one was on special offer for only a few pounds and at that price well worth it. It's one of those Radio 4 programmes that you can't get a podcast of so if you want to catch up on back issues or listen again this is your only choice. (Episodes broadcast only stay up on bbc iplayer for about a week after first broadcasting and you can't keep the downloads for more than a few weeks).