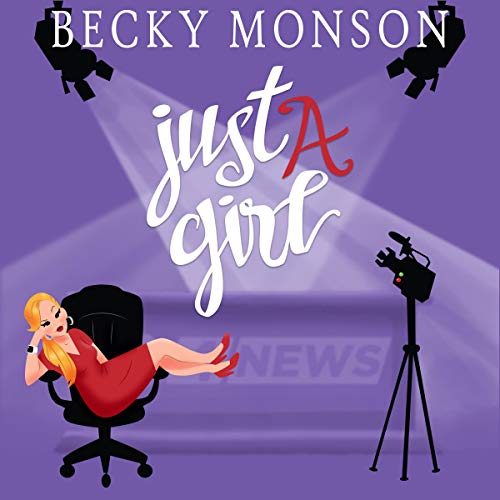 What happens when the right girl and the right guy meet at the wrong time?

One thing that can be said about Quinn Pearson is that she has a knack for doing the wrong thing at the wrong time. Like, the worst time ever. Take her job for instance. One little slip of the tongue using the mother of all swear words while reporting the news, and suddenly she finds herself with over 18 million views on YouTube and her employment in jeopardy. If that wasn’t bad enough, when she meets the man of her dreams, she nearly chokes to death on a powdered sugar donut.

Thankfully for Quinn, the dashing Brit, Henry, finds her near death experience quite charming. But just when Quinn thinks her luck is going to change, she finds out her timing is all wrong again. Henry is off limits. Or is he? Maybe it’s time for Quinn to quit settling for what life hands her. Perhaps it's time for her to become more than just a girl.

What listeners say about Just a Girl

I am so glad I stumbled on to this new (to me) author! Her writing is adult but with a fun YA vibe. The characters are raw, real, and relatable. It a was fun to see Quinn change so much through the book and to get a glimpse in to Henry’s change as well. I love that she stays true to herself and is so kind- but learns to stand up for herself. It’s a great message that many women can relate to and well hopefully do themselves! I will be reading or listening to more from this author!
The narrators were PERFECT! Absolutely loved every minute of listening to this.
The book was clean... but with some references to things. I received this book for free in exchange for an honest review.

Such a fun story!

I️ loved this book. Becky’s characters make you want to be in their friend circle in real life. The story line is so entertaining and enjoyable. Can’t wait to read about all the friends!

This book was so much fun to listen to. I thought the characters were all pretty believable. I loved Quinn’s character and I was glad when she finally stood up for herself. The book was clean too- there might have been a cuss word or 2 but nothing big.
It was kinda fun to have 2 narrators in this book. Both did a great job- especially Holly since she had a longer portion to narrate.

Seize the Cupcake and don't settle

I loved Quinn and could relate to her a lot more than I did to her bestie, Holly in Just a Name. Quinn has insecurities that has her accepting the limitations others put on her, especially where her job was concerned, but also in her relationship with Henry and her family. She's accepted as fact that she's stuck with the noon broadcast until the evening anchor retires, instead of fighting for what she wants. As her friend Thomas told her "Don't do that settling thing...Just like that game you used to make me play. You're a settler of Catan."

Oh Henry! What is it with British guys named Henry? Dark hair, blue eyes (my favorite combo), that swoony accent, and knee buckling snogging sessions--that probably would've had me agreeing to keep our relationship secret too. Thankfully Henry comes to his senses before it's too late.

I love the humor Becky Monson puts in her books. I laughed out loud at some of Quinn's inner thoughts, especially about her work nemesis Moriarty. I wonder if she uses the same file for her horns as she does for her claws. LOL Quinn's not the only one with humorous quips. Her friend Thomas is pretty blunt, and my favorite was a comment he made about one of Quinn's favorite suits she wears for work--But that suit! Can you please get something with less shoulder padding? You look like you're about to invade Russia. Vive Napoléon! Even Quinn says Thomas is an acquired taste, but that was hilarious.

I was thrilled when Quinn stood up for herself (I won't spoil it by saying how), and it made the people around her take notice, and reevaluate things. Her job got immensely better and so did her relationships.

I liked the narrator's voice, especially for Quinn. The male narrator sounded kind of "stuffy" for Henry at the beginning but maybe that's how Henry was supposed to come across.

I absolutely love this book! I relate to Quinn on so many levels. And oh, do I love Henry!

Not bad but not my cup of tea

I’m not sure how well I actually liked this story. I liked the premise but the actually story itself just wasn’t really my cup of tea.
The main characters, Quinn and Henry, just seemed a bit wishy-washy to me. I guess I couldn’t really relate to them but the potential of the character development was good - it’s just in execution it seemed to fall a bit flat.
I’m not trying to be negative - there were plenty of instances that I enjoyed. Quinn’s interactions with her friends and family for example - I quite liked that she got together regularly with her friends and the support they showed her. The same with her family - there was some friction and strain present in some of their interactions but this was realistic and I liked how it was eventually resolved. I even liked Brady and am glad that they remained friends, but I can’t say I particularly liked how she went about handling that relationship. I thought the villain of the story was well done and I the end result with that was satisfying. Really I guess it just comes down to Quinn and Henry’s roles and their interactions together. It all comes good in the end but it just didn’t sit with me well - it seemed a bit superficial to me and the whole instant attraction (if not love at first site) thing has not a favourite trope of mine.

I listened to an audiobook for this story and on that note I thought the narration was well done for all of the American parts, although I have to admit the English accent wasn’t the best. But then it can’t be easy for an American female to play the part of an English male (or vice versa for that matter) so considering this, I think it was still a good job. Although the epilogue is read by Eli Thorne as the epilogue is written from Henry’s point of view.. Up till that point the entire story was written from Quinn’s point of view and so was narrated by Holly Warren. Again, not sure how I liked this. The epilogue itself being written from Henry’s point of view I quite enjoyed but the switch in narration threw me. Seemed a bit odd to have just six minutes of the book done in a different voice but it’s a different style I haven’t come across before so could be I’m just not used to it.

This is the second book in the series. I haven’t read the first one but from all I can tell this doesn’t affect this story and it can easily be read as a stand-alone.

I received a free audiobook of this story however this in no way influenced my opinion and I am under no obligation to leave this review.

I started this earlier today & was so absorbed by it that I ended up getting nothing else done till it was finished. The story is fun, funny & emotionally compelling - legit, not angsty.

There's a part of the plot that seems overly obvious that I believe most people will figure out pretty quickly, but its resolution is fun, and it's not a make or break weakness for the story.

The ending is a super-sizedly satisfying happily-ever-after!

*Language: very minor - a half dozen uses of h-ll & multiple references to an f-bomb incident caught on video but it's never stated or anything

[The narrator does a decent job, though her English accent is a bit...weak...I could bear it except for a few times when she seemed to be trying a little too hard & then it was cringey. The male narrator who abruptly takes Henry's voice at the very end was good, but frankly, the switch was startling]