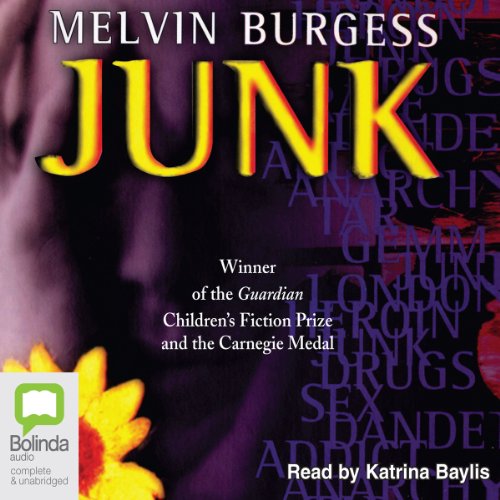 "Everything is free. That's the secret. The only thing that isn't free is you. You do as you're told; you sit in your seat till they say, 'Stand.' You stay put till they say, 'Go.' Maybe that's the way you like it. It's easy. It's all there. You don't have to think about it. You don't even have to feel it. I sometimes wonder how this planet keeps on sticking to my feet. They did everything they could to pin me down: my mum, my dad, school. They put me in homes with kind guys and they put me in homes with bastards. They did things to me you can't even talk about. I'm okay. What about you"?

Melvin Burgess's most ambitious and complex novel to date is a multi-faceted and vivid depiction of a group of young people in the grip of drug addiction, told in many different voices, from the addicts themselves to the friends watching from the outside who try to prevent tragedy.

What listeners say about Junk

Where does Junk rank among all the audiobooks you’ve listened to so far?

Junk is an amazing book, building a very clear picture of the lives of it's characters however the voice acting brings it down because the actress uses northern accents for people who have lived their lives in the South West of England.

Would you be willing to try another one of Katrina Baylis’s performances?

If she can get the accents right, then possibly. Many of the characters are from the South West of England ( Gemma, Tar, Solly) and she gives them all Northern English accents for some reason. This is really irritating, especially for Solly who expressly tells you that he has lived his entire life in Bristol so why he has a Yorkshire accent is beyond me. Its either lazy preparation or not reading the book before narrating it.

You can do, its riveting enough to do.

I haven't read junk for many years, so when I saw the audible I thought I'd get it as I remembered loving it. Sucked me straight in like it did when I read it, I can't explain why it's so good but it is. Real people doing real things. The good and bad sides of drugs. I cried a few times nearing the end. It's just a great read everyone should read it, whether you've done drugs or not and if your a child or an adult.

Fantastic listen on the true to life

More of a book for young adults and the naivety of using drugs which the protagonist did not really understand.
Moving story overall though

The story is interesting and well written and I'm enjoying that aspect. Unfortunately I really don't like the narration. It might just be me, I just find the bad accents annoying and it doesn't feel like the narrator connects with the characters.

Loved this books since I first read it 15 years ago!
Amazing story and well written with fantastic characters.
It's a story I can finish then start up again straight away and be whisked back round on the turbulent adventure that follows the life of these trubbled characters!

Amazing book but the voices were all wrong

The narrator using different accents for the characters but none of them were a bristolian or south west accent which Tar and Gemma would have had so it took me ages to get used to them having cockney accents. It might have worked well having different actors for each character. The story is still amazing and true even today.

Junk is hard to listen to if you are or have been an addict, it brings up lots of personal feelings about why we try so hard to please our parents or our friends, or lovers, and in the end, it was just you there all along. It reads like a hit. That first stage of youth where its discovery, but you go too far, strain, because of some personal thing you have that you cant quite own, and then its suddenly sick, and just a mess. But I ended up feeling like, I knew this book would be rubbish, and it was. Because that's kind of what addiction is. A load of junk. I don't know. it's not easy to read. But maybe if I had read it earlier, I would have much quicker got out of that glamorous idea I had about opiates when I was younger. Because this story has happened to so many people, and though the main characters were lucky in the end, they still just are, it was all just a waste of time in a way because they were just high, and kids, and had a disease. They got really lost and you can pick apart how in this book, without there being another kind of cure. I guess it made me come out thinking, if everyone is sick, then what's the point in making yourself more sick than your are already? Ultimately it made me feel compassionate to the characters.

Gemma. I feel so bad for her that she ran away just because she was going through puberty and had all these strong feelings about wanting to break away, but actually it was just her growing pains, and it's sad.

What does Katrina Baylis bring to the story that you wouldn’t experience if you had only read the book?

I think that her accent implies she has some knowledge of the place, and compassion for the people and places.

Gemma meeting Lily, Lily was clean at the time and showering Gemma with love and guidance as how to just be herself without drugs, but when she got back on it, Gemma followed her and then got addicted. It was really touching because it seemed like she had found a real friend, but then it turned really sour, and finally when 'the mask slipped' and Gemma realised that Lily was a rally scared helpless girl. Also the doing tricks, prostituting and how Scully, saw the girls as really young and liking them because of that. Then throwing them away when they looked old because of the drugs.

It made me have compassion for Gemma, and also for anyone who has found themselves lost and lucky enough to realise they were being fooled. By themselves.