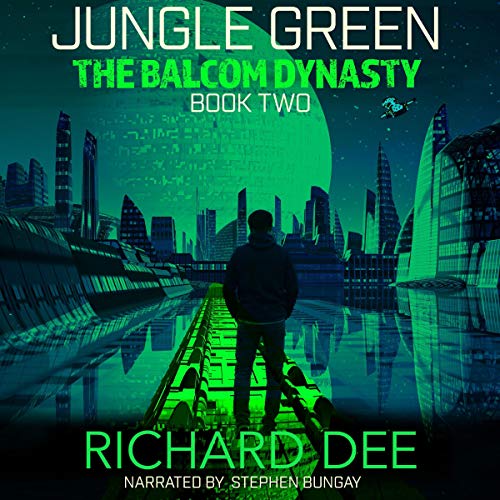 One tablet a day, it’s supposed to keep you alive. But it might just kill you.

TC is the wonder drug. Manufactured in secrecy on a remote planet at the edge of the galaxy.

It makes worlds inhabitable; and Balcom Industrial lots of money.

Suddenly, the people who need to take it to stay alive start to die!

For Layla Balcom, the news is devastating. She’s just resumed her rightful place as head of Balcom. This problem threatens to spoil her moment of triumph. Can the drug be flawed? Or is something else going on?

The answer needs to be found, quickly.

Whether Layla will survive is not guaranteed.

What listeners say about Jungle Green

I heard a sample chapter of Jungle Green at the end of the audiobook Ribbonworld, and it took me little time to buy, download and start listening. Stephen Bungay’s adaptation of Mr Richard Dee’s second book in Balcom Dynasty is brilliant, and holds the listener captive. In fact I did my chores and errands whilst listening to this book, it was that good, and I was unable to turn it off.

I really enjoyed the crime noir vibe that Mr Bungay delivers, and his rendition of a ‘now secure and settled’ Miles Goram shows in his voice. The slight underlying nervousness, dominant in Ribbonworld, reflecting the apprehension of a newly released convict under suspicion again for a crime he didn’t commit, has now completely vanished. Miles’ voice has an assured depth and richness, mirroring his new found status as the husband of Layla Balcom and Press Officer to Balcom Industries. Layla is gently voiced, with an assertive timbre and you know instantly this is a woman who has the galaxy at her feet. Layla as a character isn’t easy to capture in a vocal portrayal, hard enough for a woman narrator, doubly-difficult for a man, but Mr Bungay’s vocal ability gives this protagonist a life of her own. You forget that it’s been delivered by a male narrator, Mr Bungay’s capture of her tone and temperament is that good.

Jungle Green is quite a novel to be made into an audiobook, as it has an array of characters. Dashper in particular, the physically-impaired (he lost an arm in an explosion a few years back) General Manager of Sayshoo Pharma (a Balcom company) is voiced with a certain deference and austere authority, capturing the personality of Dashper, and getting the listener to understand him better. He’s been pitied, and that is something he despises. You can feel his sense of responsibility and the need to see things through, whatever the cost.

Marrisa, another female, is a vet on Sayshoo, and her Baysen (similar to Bison) that she husbands and cares for, play a critical part in the manufacture of Sayshoo pharma’s wonder drug TC. Her voice is crisper, younger than Layla, with a touch of angst and hurt of the damage humans do. She has the proverbial ‘chip’ on her shoulder. In a very fiery interaction Layla and Marissa go one to one in a confrontation, and it’s here that Mr Bungay’s incredible vocal skillset in narrating two different female voices, that are both assertive and powerful, comes into its own. It is quite breath-taking!

Other characters, such as DS Hugo Moritiz, part of an interconnecting storyline on the planet Trevia, are voiced with a touch of pathos. An underlying tone of regret that crimes are often swept under the carpet in favor of Trevia keeping their ‘leisure party planet’ tagline unblemished. You also hear the genuine fear of what a man like the millionaire father of the dead boy found could do to Moritiz’s career and promotion prospects if he’s rubbed up a little bit, the wrong way. A case of egg-shell walking, and Mr Bungay delivers this feeling in his narration of Moritiz’s investigations.

Jungle Green is a captivating story with a chilling subtext about counterfeit medication, and given the true impact of these underground drugs on the world, with millions dying every year, and criminals garnering billions from their pain, this is book that stays with you. Brilliant and absolutely unmissable, and I recommend this audiobook to anyone who really appreciates good listening entertainment with a factual, gripping edge!

Even better than book 1

Great story. Not read anything quite like it before. Love the explanation of the different world/s and how we’ve conquered them to survive on them.
Miles is a great guy, a nice guy and someone I think we could all use on our side. Can’t wait to see where these characters go next!
Narration by Stephen Bungay was ode to for this series!
I was given this free review copy audiobook at my request and have voluntarily left this review.

In Jungle Green, Richard Dee gives us another stellar mystery. Layla Balcom, who won control of her father’s company from those trying to steal it in Ribbon World, now has to keep it profitable. To that end, she is investigating some problems at the secret manufacturing facility of the wonder drug TC, trying to sort out the infighting among the executives. Then people start dying from her wonder drug and she has even bigger problems to resolve.

This is a classic Dee mystery with an intricately constructed plot with just enough clues as to what’s really going on. The characters have matured since their appearance in Ribbon World and I really enjoyed watching them operate at the top of their games—not that being at their best makes anything that happens here easy.

This one’s a nail biter.

I received a free review copy of this audio book, at my request, and am voluntarily leaving this unbiased review.

This book is not as engrossing as the first. Bland characters subtract from the immense world building and poor audio quality provide a unnecessary distraction.

The premise of this book is very good. People are dying and the deaths are blamed on Balcom. The book starts with an investigation of a drug plant where we meet a bunch of 1 dimensional suits. While the first half of the book takes place there, very little of it has any substance to it. The characters are mostly just there. With the exception of 1 worker, they all only serve to provide exposition when needed. They are oddly secretive with the head of the company and it all feels a little unnatural.

The overall world feels much more filled in, this time around. We have other planets, manufacturing methods, underworld elements, etc. The universe feels more lived in, rather than the 1 world from the first book. The setting takes place in a factory, ships, resort world, beach paradise, etc. It is varied and feels natural to the story, rather than just crammed in for good measure.

The plot is fairly straightforward, but still kinda fun. It's fairly predictable, at times, but not so predictable as to make it a bore. I was interested in the characters and was curious to know if my my suspicions were correct.

The dialog was fairly normal, in the beginning, if a little clunky. However, toward the end of the book there were increasingly odd statements between characters, bad enough for me to question if the author has heard people speak before. But they were few and didn't detract from the overall story.

What did detract from the overall story, however, was the audio (an essential part of an audiobook). Sheldon Bungay reprises his role as narrator, however poor performance and bad editing made the audio distracting, at times.

Firstly, the narration is done in a somewhat monotone that bears resemblance to The Brain (from the cartoon Pinky and The Brain). The voice isn't bad, per se, but the monotonous delivery isn't good, either. He does male voices well enough, but seems to have only 1 (unconvincing) female voice, which he uses for all the females. All this, in itself, isn't great but isn't all that bad, either. The narration isn't quite as energetic as book 1, but it's fine.

However, the editing is poor. This performance feels like the narrator sat down and recorded all the narration, main characters, secondary characters, etc. All separate and then it was all cut and pasted together to make a book. Now, I'm saying that that's not a valid way to record a book, but this one SOUNDS like he did that. Dialog between characters frequently have clipping as not enough of a pause is put in between characters or between characters and narration. Sometimes the beginnings or ends of words get left off, sometimes the sounds are so close together they almost overlap. The audio quality not consistent between these items, either. Either mic placement is slightly different, or background or even just static is different between the sentences. This is the audio equivalent of cutting letters from magazines to write a note.

All in all, this is a good story, with some interesting world building and a fun idea. It explores concepts of drug production in space and has some nice side elements. However, some of the background characters are not much more than office plants that speak and some of the dialog (particularly later in the book) is not the authors best work. Also, the audio quality is poor on all fronts. Narration isn't strong, and not as good as the first book, and the audio quality is distractingly bad.

However, it is in interesting world, so given the chance I may check out book 3 if it crosses my path.

Nothing Out of The Ordiinary

Yet another overly long scifi book by Richard. Nothing out of the ordinary. On a scale of 1-10 I'd give it a three. He's written better...