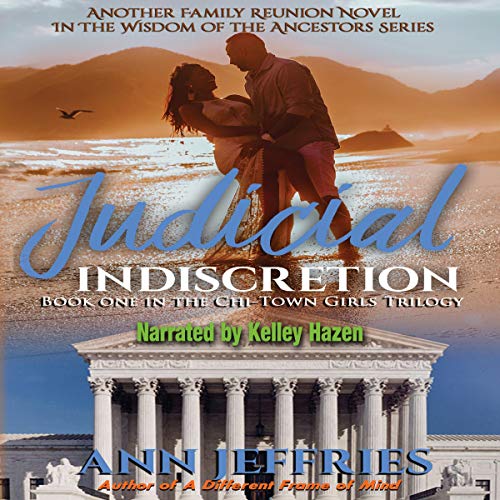 It was a long, hard-fought battle for Judge Kristen Catherine Bryant to be appointed by the President of the United States to a judgeship on the DC Circuit Federal Court of Appeals. She endured Congressional interrogations, press and news media interviews, speaking engagements, and grips and grins with intestinal fortitude and no little amount of patience and guile. That was all now behind her. She had a month to decompress before she had to move from Chicago, Illinois, to Washington, DC, to assume her new post.

A little vacation to a private Polynesian Island, where no one knew her, was the perfect getaway. What she didn’t want was to share her two-bedroom, two-bath luxury suite with a complete stranger; a man she had never met. Especially dangerous was what this liaison would do to her sterling reputation if a whiff of this got to the media and the scandal that would ensue. Her highly-coveted judgeship could be over before it started.

International attorney Thomas Ashton Marshall, III, was highly sought after when big clients wanted to win. His Marshall and Marshall, Portland, Oregon, law offices were a place he rarely visited as were the courts in the US. After winning his most recent case and learning that an appeal had been filed, the media never let up dogging his tracks. He sought a little privacy and to rest and relax at the Plaza de Masquerada, the place of masks, where his identity never needs to be revealed. What happens at the Plaza stays at the Plaza. That is until he was forced to spend nearly a month with his unintentional suitemate and then a week of passion before she disappears. He refused to give up looking for the woman he only knew as KC. Cinderella she wasn’t, but if the shoe fit....

Judge Bryant would never forget Ash even in the face of her former fiancé’s sudden and unexpected hidden agenda for wanting them back together. That was bad enough, but on her first day on the bench as a newly appointed federal judge, the bottom dropped out of her world when her former fiancé stood for the plaintiff and her secret lover stood for the defense in her courtroom.

A great story! I love how the characters personal and professional lives came together. It was great to see how they both handled situations where their desires were in direct conflict with what their controlling parents wanted.

I am never disappointed with a Kelley Hazen narration. She really knows how to bring a story to life!

Judicial Indiscretion by Ann Jeffries is such a brilliant listen. I loved how the author wove the suspense and family dynasties and political agendas and the legal court system. The idea of escaping away from everyday life and becoming someone without a past is ideal. The imagery in this book was great. I loved the twists and turns, the potential blackmailing, and so much more. Kelley Hazen was perfect performing this book. She adds the right emotions and gives the characters distinguishable voices. I could hear exactly who was speaking. I will definitely listen to more books by this author and narrator. I did not see the ending coming, which was well done. This book is a standalone listen and the beginning of a new series.

I was voluntarily provided this free review copy audiobook by the narrator and found it fun. Along awaited vacation gets turned upside down for both Ash and KC when the resort is over booked and they become suite mates. It's not smooth sailing as they become friends and more. All too soon they're back in their respective worlds and being drawn into everyone's plans but their own. Suspense and humour dominate this novel. It's interesting and intriguing characters keep you listening, wondering what unexpected twist will happen next. It's very enjoyable and I'll have to check out more books from this series.

This is the start of a brilliant series. Amazing characters and great storyline. I highly recommend this audio book. Kelly Hazen is excellent as always with her narration.❤️🥰😍