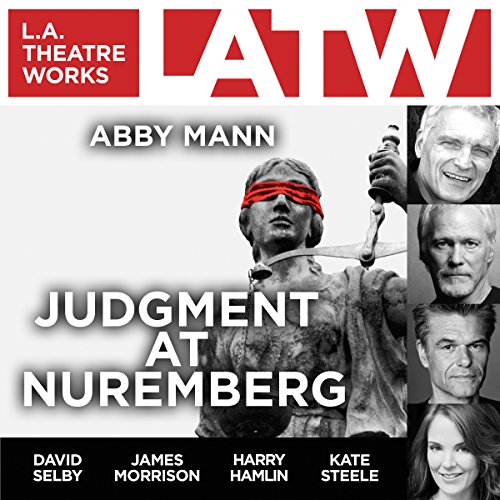 Abby Mann's classic story about the Nuremberg trials, under which German leaders were found guilty of crimes against humanity in 1945 and 1946. Even today, the play remains a shattering indictment of the consequences of unchecked authority and the seductive power of group thought.

Includes an audience talkback with Judge Bruce Einhorn, who served at the Justice Department supervising litigation against Nazi war criminals and is currently a professor at Pepperdine University.

What listeners say about Judgment at Nuremberg

A terrible question for us all

While it occasionally hurries through elements upon which the film version lingers, this does nothing to detract from the overall story and its consequences, which are well acted here with the strength and subtlety that the writing deserves.

With the monsters of the Nazi high command gone, attention shifts to the upper ranks of the reich's civil infrastructure, where judges carried out the legal dirty work individually, hanging and sterilizing anyone who violated the laws of the new Germany.

But this is really the trial of the German people. Who knew what and what could they be reasonably expected to do? What's the difference between making a law and following a law?

Ultimately, this puts the audience on trial. We are all asked to reflect on ourselves and what we might have done, faced with a straight choice between complicity in the slaughter or our own deaths.

Would we really have behaved differently? Generations of Germans will face this question. Thanks to this play, the rest of us will too. And we must.

Very moving and powerful. I had seen the movie many years ago and this book totally did it justice