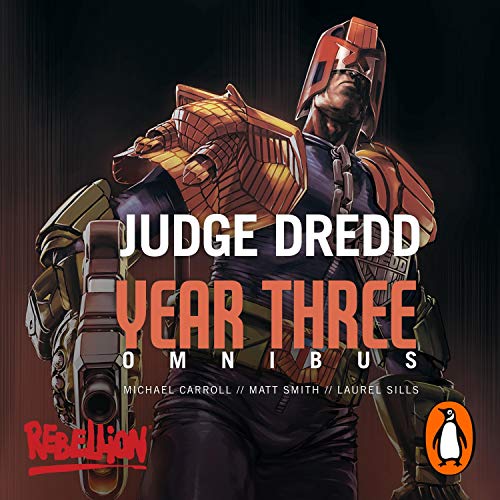 Mega-City One, 2082. In two short years, Judge Joseph Dredd has tackled hardened killers and would-be revolutionaries; he's taken beat-downs and bounced back; and he's even arrested his own brother.

There's no such thing as a 'normal year' in the Big Meg. In his third year on the sked, he'll become embroiled in the growing anti-robot movement; he'll head back out to the Cursed Earth; and he'll fall afoul of the secretive SJS - and not for the last time....

Dredd at his best

An excellent book of three stories, the first was by the best based on the SJS. While I find that the modern day interpretation of MC by authors compared to the past may be problematic by my perspective, the stories are nonetheless wonderful entertainment and add to the myth that is Judge Dredd.

Two out of three solid stories

The first two stories weren’t bad reads. The third tried doing really odd things with Dredd, however. It went so far off from the Judge Dredd of comics trying to build him as a human and empathetic character, capable of questioning the authority over him or himself and often pictured without a helmet. These are completely counter to the Joe Dredd featured in every other account. It isn’t something fresh; it’s just a wrong turn on the path Dredd has trudged since the seventies.

Dredds voice is spot on

Brought this after listening to Judge Deaths big day out, William Hope certainly has talent for this - and I do enjoy his 'Boston' type Dredd voice who seems perpetually irritated with everyone and squirms with Human interaction.

Stories are okay, but i preferred the Judge Death ones personally.

it's by far another winner for Judge Dredd audio stories this will be the 5th one I've committed to without disappointment.

The stories gripping & detailed the narrator again delivers an array of character voices that separate the law man Judge Dreed from his foes. Absolute ride into the world of Dredd if this is your preferred way learn the lore. highly recommended listen.