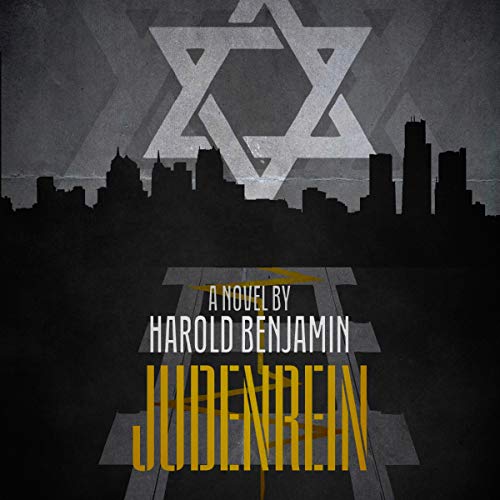 Zack Gurevitz has had a checkered past. A Yeshiva boy, turned Green Beret, turned junkie, excommunicated by his one-time faith and now the potential savior of people he doesn’t even like.

As a white supremacist movement stealthily takes the reins of power in America, it is again the Jews who are made out as scapegoats. Stripped of wealth and citizenship, they are made to live in 21st-century ghettos that hark back to a sinister and murky past that many had thought would never return.

But things are about to get much worse. With the revealing of a planned terror attack that will place the blame firmly at Jewish feet and condemn millions to death, Zack is contacted by Jewish leaders in Detroit, begging for his help.

Reluctantly he agrees and before long he is mired in a conspiracy that will have far reaching consequences for his country, the Jewish population, and even his own sanity.

As the clock ticks down, can Zack find a way to avert a looming disaster? Who is behind the conspiracy? And can he really trust anyone?

What listeners say about Judenrein

A Powerful Thriller that is relevant today!

Zacharia (Zack) Gurevitz is a man who has many faces and burdens to carry including an ex-Green Beret, a struggling to stay clean-Junkie, and a son who was excommunicated by the very people seeking his help. Trying to get his life together, Zack finds himself in the middle of a conspiracy where everyone has an ulterior motive. Stripped of their citizenship, property, and herded into ghettos, the Detroit Jewish leaders are asking for his help and protection; he reluctantly agrees to help after being dragged in. Nothing is as it seems, no one speaks the truth and Zack must figure out the truth. Zack attempts to save the Jewish people of Detroit and ultimately worldwide as antisemitism will run rampant as it once did in Germany given how high up the conspiracy goes!

The author, Harold Benjamin, takes the actions, thoughts, and beliefs of white supremacist groups and puts them into words building a story that is very much relevant today, the past, and the future. This is a powerful book that calls out the antisemitism beliefs and thoughts demonstrating that antisemitism is not limited to one type of people but rather much more widespread and much better hidden.

Benjamin builds a strong story, provides deep character development of each person, and leaves his listeners on the edge of their chairs with each word spoken towards its climactic ending. Graphic in his details, Benjamin takes the listener for an unforgettable experience.

The narrator, Adam Hanin gives a strong performance that keeps the story flowing and projects the pain and emotions of Zack expertly. He spoke clearly and with the appropriate cadence. This is the first performance I have had the pleasure of hearing Adam Hanin, I look forward to hearing more.

I enjoyed this book as it was powerful and one that made me think long after the book was over.

There were no issues with the production or quality of this audiobook, it was well done and clear.

Disclaimer: This Audiobook was provided free of charge by the author, narrator, and/or publisher in exchange for a non-bias, honest review.