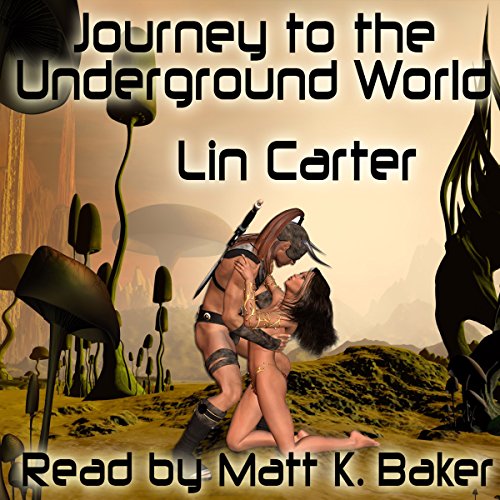 Journey to the Underground World

The legends of a fabled land of the lost have floated for centuries around the bazaars of North Africa and the sand-surrounded oases of the vast Sahara. They tell of treasure caravans that have never returned, of weird monsters forgotten by time, of savage peoples surviving out of antiquity.

Eric Carstairs had heard these tales but until he met Professor Potter, he did not really believe them. But the fabled paleontologist had the location of the entrance to the Underground World pinned down, and he wanted a man of courage to fly him there.

Carstairs and Potter took the chance -- and pierced the pit to Zanthodon, a world within the world, where cavemen and cave-beasts roamed side by side with dinosaurs of millions of years ago.

What listeners say about Journey to the Underground World

Everyone should read a couple of lost world novels

I believe I’ve come to the point in my life where I need never pick up another lost world pulp fantasy novel. Seriously, they’re all running together in my mind.

In Journey to the Underground World, Lin Carter is (as usual) channeling Edgar Rice Burroughs. In Carter’s version of an underground world, an adventurer named Eric Carstairs meets up with a paleontologist named Dr. Potter who thinks he knows how to find a legendary land under the earth. They fly a helicopter down a volcano and discover Zanthodon, a world where dinosaurs, wooly mammoths and saber-toothed tigers threaten the Neanderthals and Cro-magnons who also live there. There are creatures to fight, “savages” to outwit, and (of course) a beautiful maiden with a “lithe young body,” “perfect breasts,” “smooth thighs” and “supple flanks” to rescue.

The plot of Journey to the Underground World is fast-paced and sometimes exciting, though it differs little from similar stories of this type except perhaps that it has some things to say about the evils of racism. (This is notable since many of these types of books are Euro-centric in a very ugly way.)

Lin Carter maintains his bad habit of writing his stories in first person but showing us plotlines of the other characters when the point-of-view character isn’t present. This is confusing and sloppy but typical of Carter.

I liked Matt K. Baker, the narrator of Wildside Press’s audio version, but I can’t recommend Journey to the Underground World unless you’re new to the lost world genre — everyone should read a couple of them. But even then I’d suggest that you read Edgar Rice Burroughs instead.