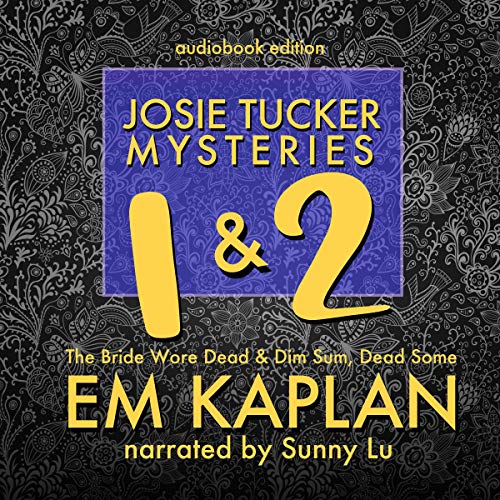 Josie Tucker is in a pickle. She's a rising food critic in the blogosphere, but she can't eat. Her testy stomach is always in knots - is it anxiety, a food allergy, or something else? With a Boston blueblood matron funding her adventures, and a trio of loyal friends, Josie finds herself in scrape after bizarre scrape, barely escaping by the skin of her neck.

Snarky food critic Josie Tucker usually can soothe any problem with food or drink. Missed bus? Mango-orange smoothie. Mild doldrums? A piece of peppered beef jerky. But lately, she can’t stand the smell of a watery cup of broth. Being at the mercy of an indignant and vengeful stomach is no cup of tea. So what happens when she gets roped into being the last-minute bridesmaid at a society wedding? The bride’s mother tries to kill her with kindness. Too bad for the bride, Josie won't be the only victim in this seminal adventure.

Ivan Sorokin is missing. Who wants him out of the picture - his wife, his business partner, or the stripper who holds his heart? Can grouchy food critic, Josie Tucker, unravel the puzzle with more twists than Lombard Street and find the missing software entrepreneur? Chinatown. Dim sum. Murder. Josie’s perfect ingredients for adventure.

Book 2 is the stronger novel

I want to start off with this book being the first mystery novel that I listened to. The majority of mystery novels that I have read mostly includes horror as the major theme, so I might be mistaken in a lot of my misconceptions about pure mystery books. My main problems with the first book are featured around the main character’s motivations, including why she agrees to get involved in the case. The author seemed to go everywhere trying to touch on thriller, romance, mystery, but unfortunately the first book was a bit of experiment. I don’t know if I would call this a mystery. It has more romantic and thriller elements. I do think that some more stalking elements in the middle chapters would have made the book stronger. The second book of the volume, Dim Sum, Dead Some is the stronger of the two novels. Unlike the first book this seems to be a better structured mystery novel with actual clues and better planning. My only real issue with the book was during the big reveal but I could see where the author was going with the ending. This is only my second mystery novel so I am unsure if the pacing and tone is correct, but I found it mostly enjoyable.

New series to me, loved the narration and stories

The Bride Wore Dead - Book 1 - Josie Tucker began investigating a possible murder with no experience. She learned as she went, and she found that danger can lurk behind every corner. As things looked dire, she not only got the information she needed but she connected with her heart, Drew. I enjoyed this story and look forward to the next. Dim Sum, Dead Some - Book 2 - I found this story just as interesting as the first one. Josie Tucker was intriguing. She was such a strong woman, as well as intelligent, caring, and prone to mishaps. She had an everyday approach to talking with suspects and even those she did not know to be suspects. The local police seemed to trust her instincts along the way. Josie had to work through a personal problem as well as the murder this time. The mystery itself was interesting and the journey to find the killer. I was surprised with the resolution but may have missed something along the way. Sunny Lu did a wonderful job breathing life into these characters and kept the story pulling me in. Nice job. I received an audiobook as a gift, and this is my unsolicited review.

These were the first EM Kaplan books I have read. I am hooked on Josie!! I adored these first two books and can't wait to read the next two!! Plus, EM Kaplan is a fantastic person, so more than happy to support her writing!! ♥️

Great listen for one credit

I've had these books sitting in my library for awhile, but for reasons, never got around to listening to them. Now, I am on the hunt to find all of her books. I very much enjoyed these.

I’m craving Dim Sum, Steak, Scrambled eggs, all sort so yummy. But that’s due to the skills and abilities of the writer, and the abilities of the reader. The storyline is very well pulled together as you are slowly brought through who is who in these who done its. Once you figure out who did it. It’s then just finding out the how’s and why’s, if you figure out who did it first. I love the uniqueness of a food critique turned PI, you get a brand new take on the observant eye.

Just finished listening to the first novel within 24 hours of purchasing. It was so much fun! In my opinion the narration took a few minutes to hit the right pacing, but after that I thought it was great. Josie is the grumpy, sarcastic, stomach cramp-riddled protagonist the world needs. My favorite aspect of this novel was the fresh and unique cast of characters. The mystery was engaging but the dialogue also made me laugh. It was very difficult to put down!