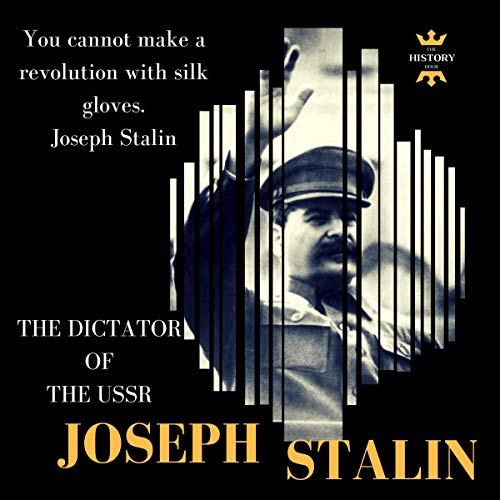 Joseph Stalin: The Dictator of the USSR

By: The History Hour
Narrated by: Alexander G.

Inside, you’ll hear about:

To eradicate those regarded as "enemies of the working class", Stalin instituted the "Great Purge" in which more than a million were imprisoned and at least 700,000 were executed from 1934 to 1939. In 1939, Stalin's government signed a nonaggression pact with Nazi Germany. Germany ended the pact by invading the Soviet Union in 1941. The Soviet Red Army halted the German incursion and captured Berlin in 1945, ending World War II in Europe.

What listeners say about Joseph Stalin: The Dictator of the USSR

Every chance I got I would get back to listen. A very intriguing book based on fact. Five Stars

For someone who ran the largest country in the world, he did a good job keeping his people focused in the worst of times.

I am not a Stalin expert, so I cannot state the faithfulness of this book to the Stalin mythos. If I had one complaint, and it is not really a complaint, the narrator has a voice that will lull you to sleep if you are not careful! Very Ben Stein-ish monotone.

If you’re interested in the Russian Revolution and Stalin in particular, this is a must-listen. You can almost feel the terror, hunger and desperation, as millions of the Russian people are murdered or perish in a government-sanctioned famine.

This book is extraordinary ! Very well listen !I really enjoyed it! I listen it all in one shot, because I found it so diverting. I am anxious to find more books by the same author. recommend !!

Thanks so much for providing us with something as fun as it is educational. I simply can not wait to find the next one.

It's the material that splits ordinary beings from deep thinkers, from Geniuses. I principally like that this product. The price bearing in mind the quantity and quality for this product is the key selling point and is really un-matchable with anything else out there.

Everything about this bio is surprising. So much interesting information was revealed throughout the whole audiobook, it seemed like it lasted for more than 1hr because it covered the most important events and tragedies. Examples of his music are also heard. The narrator is one of the best I've heard.

Great book. I am quite suspicious when i read a biography, the author can pass many subjective elemens into the story. But in this book i was not. And i am sure i will re-reaad it, after sometime.