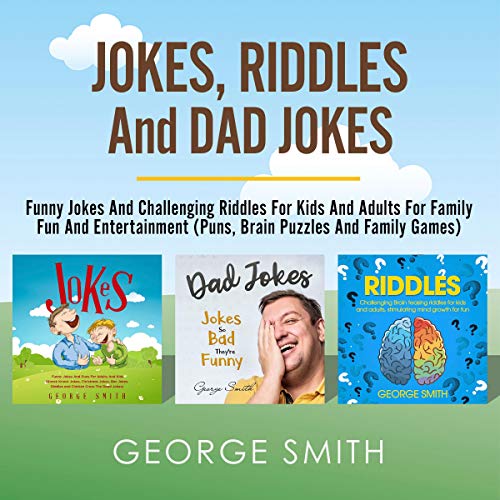 Maybe you’re looking to kill some time for a long road trip with the family.

Maybe you’re trying to find some more material for your future on-stage career.

Maybe you’re a lonely guy living in an apartment with a bunch of cats who just needs a laugh - for heaven’s sake!

Whatever it is, Jokes, Riddles and Dad Jokes by George Smith has all you need for the entertainment you want.

Take this audiobook with you on a long car trip with the kids and instead of hearing “Are we there yet?!” on a constant refrain, maybe you’ll find that they are actually enjoying themselves. And you will, too, trust me.

Sharing jokes and riddles is a great way to bond with people and make time go faster!

In today’s world, it seems like it is becoming ever more important to figure out how to laugh. Society today seems always to be so serious and doesn’t make time for the most important things - like laughing with your friends and family over a few good jokes.

Laugh and be brain-boggled until it hurts with:

Enjoy the most hilarious or stupid (however you put it) jokes known to mankind and when you've finished, spread the laughter. Buy some glue, cut up the pages and stick them on strangers. That way, the joke's on them.

What listeners say about Jokes, Riddles and Dad Jokes: Funny Jokes and Challenging Riddles for Kids and Adults for Family Fun and Entertainment (Puns, Brain Puzzles And Family Games)

Simply hideous I cannot believe anyone would waste their money on this garbage. Total rubbish

This book was a hit with all of them!

This book is full of riddles and questions that kept them busy for days! They like to get together with their friends to see who can stump who. This book was a hit with all of them! I would definitely recommend!

No surprises here. These are truly dad jokes in their glory. Some of them are surprisingly clever, most are just eye-roll worthy. This is the perfect gift for dads and for the whole family honestly.

This item was perfect.

A must for all professionals

My 8 year old granddaughter has had so much fun with this simple little Audio book, I wish I could find cheap little things like this all the time.

Glad I bought the Audio book

His Audio book is rated for 5 to 12 year olds and I bought it for a 7 year old girl who just loved it! There are actually jokes from when I was a kid and that's a long time ago!

Great time by listening to it

This book is an awesome pick for any individual who might love to have incredible funny stories. This is the funniest book I've ever read while reading it I can't stop laughing alone in my room because of this book.

Very funny audio book. Enjoyed this one quite a bit. Well put together and had me laughing throughout. Definitely worth picking up. Nicely done!

This is a good book study about the funny jokes and stories. It's an informative book about jokes. The jokes are really a great source of fun. I am happy that I was able to read this joke book. An amazing read and very funny. I highly recommended this book to everyone.

This book was better than I thought

This book was better than I thought it would be! It’s just one joke per page and they are bonafide dad jokes all the way- excellent product, well worth the money!

my daughter gave it to my husband,

my daughter gave it to my husband, her dad...... We laughed and compared to his sayings. Ironically, and sadly, he has implemented some of those jokes into his regular conversations. lol

My 6 year old is a comedian. The best jokes are the ones she doesn't really get and then tells them anyway... it is hilarious to see her laugh once she understands the humor.

Authoritative, yet a good listen!

Pretty good joke Audio book. kids loved it. super funny but not all jokes were funny though and good job with the funny ones.

I Love it this audio book

This is an awesome reference

My grandson and I enjoyed listening your Audio book at bedtime. It is very funny, thank you for sharing it, you should s mokeopre I am your biggest fan.

I love jokes but they wernt funny

My kids loved this joke book.

My kids loved this joke book. It was non stop laughter for an hour that rattled the windows. It's hard to keep them all in the same place while trying to hold their attention, but they were completely absorbed in this book.

I got this for my dad for a stocking

I got this for my dad for a stocking stuffer and he loved it. All the men in our family sat around for an hour and went through this book. The laughing was priceless.

Most of the jokes are perfect for everyone

Most of the jokes are perfect for everyone but some are more geared towards kids but it gave me a chance to educate my kids. I loved the book and my kids loved the book too!! A very good set of audiobooks for my family. We love it so much. We always listen to the jokes and riddles from this audiobook.

You know you have heard some of these.

You know you have heard some of these. Some are new. Either way, this book is the ultimate Dad book. Originally bought for my Father in law but my husband could not put it down, chuckling as he listens.

My significant other is very into dad jokes

My significant other is very into dad jokes. This was the perfect addition to a present for him. He loves the book and we all love the jokes. They're cheesy but great none the less.