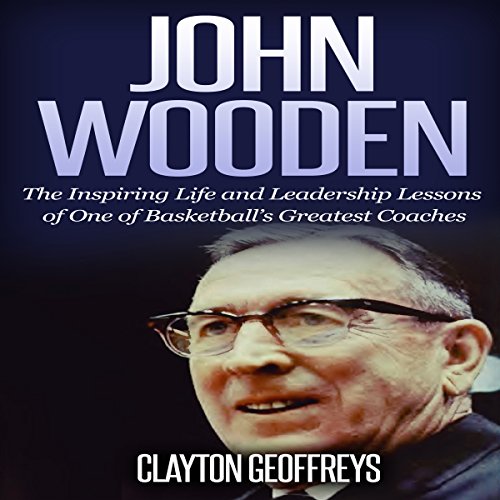 John Wooden: The Inspiring Life and Leadership Lessons of One of Basketball's Greatest Coaches

In John Wooden: The Inspiring Life and Leadership Lessons of One of Basketball's Greatest Coaches, you will learn the inspirational story of arguably the greatest coach of the 20th century, John Wooden. Few coaches carry the same esteem as Wooden, known for not only being a highly effective coach, but also a mentor and friend to his players. Wooden consistently led by example by inspiring his players to build strong habits both on and off the court. The influence Wooden had on the players he coached is evident, as many of his disciples have gone on to achieve great feats in their own respective careers.

Coach Wooden was able to lead his teams to 10 national championships, including one run that spanned seven consecutive years. There are a number of key leadership principles that can be learned from Wooden, such as his Seven-Point Creed and Pyramid of Success.

Here is a preview of what is inside this audiobook:

What listeners say about John Wooden: The Inspiring Life and Leadership Lessons of One of Basketball's Greatest Coaches

Great incite information & inspiration
This is a book I would recommend to every population of listeners.

Mr. Geoffreys. Worthwhile reading. A bit pollyannish. You could have addressed some criticisms of Wooden and tested them against the attributes of Pyramid. I can not think of a man, excepting Attila the Hun, who is such an antithesis of Wooden than Trump. So it is possible to be President while violating almost every Pyramid principle.

Another interesting contrast would be Wooden verses Rupp, a contemporary who is second among all men's college coaches in all-time winning percentage (.822), trailing only Clair Bee. Or Rick Pitino,

Jerry Tarkanian coached college basketball for 31 seasons. He spent the majority of his career coaching with the UNLV Runnin' Rebels, leading them four times to the Final Four of the NCAA Men's Division I Basketball Tournament, winning the national championship in 1990. Tarkanian like Wooden utilized a pressing defense to fuel a fast-paced offense. Then in your back yard was Red and the Boston Celtics 17 NBA championships. Anyway, a comparative chapter would add value to your discussion of UCLA greats. THANKS