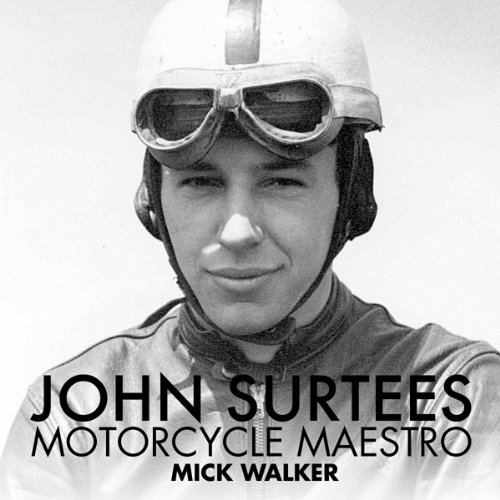 Mick Walker - leading authority on all forms of motorcycle sport - examines the long career of the quickest and most determined competitors of all time in this enthralling biography. In the late 1950's John Surtees was the dominant rider in top-level British and European motorcycle racing. A precocious talent, he began riding competitively on Vincents in the early 1950's, then REGs and NSUs and Nortons. He swiftly established himself as one of the quickest and most determined competitors. He confirmed his outstanding qualities as a rider when he won his first 500cc title for MV Agusta in 1956, and this triumph was followed by six more titles, three at 350cc and three at 500cc. From 1958 to 1960, he won by a huge margin.

In this fully illustrated and in-depth new study, Mick Walker reassesses Surtees' remarkable record and explores the background to his achievement. He recalls Surtee's early introduction to the sport, his rapid development as a rider and his years of dominance. The technical side of Surtees' career - the bikes he rode and his considerable skills as a mechanic and engineer - is covered in detail. The book gives a fascinating insight into the intense motivation that often gave Surtees the edge over his rivals and laid the foundation for the success that followed. As a rider Surtees was not only exceptionally fast, safe, and consistent, but he was also technically adept and innovative. His race preparation was meticulous and single-minded, and this professional attitude to the sport marked him out from his contemporaries.

Facts and no soul

Would you ever listen to anything by Mick Walker again?

What does Simon Whistler bring to the story that you wouldn’t experience if you just read the book?

I can look up stats if thats what i want

OK Book not so great audiobook

The narrator is simply terrible at this kind of work. He mispronounces Mike Hailwood as Haliwood and there are many others throughout the whole thing. I know audio book narrators do not make very much money for their performances but cripes this guy is terrible. I will not listen to another performance by this narrator again. The story itself is great for those who are into racing and racing legends of a by gone era.

All of the stats and race stories were interesting enough to keep me "tuned in". The authors admiration and obsession for John Surtees took away from what should have been a well constructed biography. Again, while still interesting, it could have been mistaken for a well researched fan letter. The narrator, while good, was not suited for this type of book and it should have been delivered by someone with more excitement in their delivery. Ultimately, I changed the speed of the audiobook to 1-1/2 to get through it faster.

great story but some unbelievable errors from the narrator. anongst many mispronunciations one of the greatest riders of all time mike hailwood gets referred to as mike hallywood and the world famous nurburgring is continually referred to as the nuremburg ring. someone should have spotted this prior to release.

Nothing but race statistics

I hoped to find out about John’s life but it is 95% race results. Unlistenable

really just facts and figures with some dodgy pronounciation of people and places.Sounded very automated
struggled to finish.

Great story for those interested in any kind of motor sport, however the narration is awful.