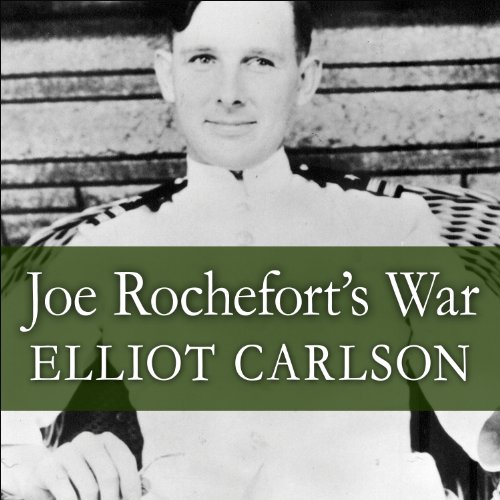 Elliot Carlson's biography of Captain Joe Rochefort is the first to be written of the officer who headed the U.S. Navy's decrypt unit at Pearl Harbor and broke the Japanese Navy's code before the Battle of Midway. Listeners will share Rochefort's frustrations as he searches in vain for Yamamoto's fleet prior to the Japanese attack on Pearl Harbor and share his joy when he succeeds in tracking the fleet in early 1942 and breaks the code that leads him to believe Yamamoto's invasion target is Midway.

His conclusions, bitterly opposed by some top navy brass, are credited with making the U.S. victory possible and helping change the course of the war. The author tells the story of how opponents in Washington forced Rochefort's removal from the decrypt unit at Pearl and denied him the Distinguished Service Medal recommended by Admiral Nimitz.

In capturing the interplay of policy and personality and the role played by politics at the highest levels of the Navy, Carlson reveals a side of the intelligence community seldom seen by outsiders.

For a full understanding of the man, Carlson examines Rochefort's love-hate relationship with cryptanalysis, his adventure-filled years in the 1930s as the right-hand man to the Commander in Chief of the U.S. Fleet, and his return to code-breaking in mid-1941 as the officer in charge of Station Hypo at Pearl Harbor. He traces Rochefort's career from his enlistment in 1918 to his posting in Washington as head of the Navy's code-breaking desk at age 25, and beyond. In many ways a reinterpretation of Rochefort, the book makes clear the key role his codebreaking played in the outcome of Midway and the legacy he left of reporting actionable intelligence directly to the fleet.

An epilogue describes efforts waged by Rochefort's colleagues to obtain the medal denied him in 1942, a drive that finally paid off in 1986, when the medal was awarded posthumously.

"The stuff of a wartime thriller." ( The Wall Street Journal)

How in the world do you make a 22 hour audiobook about an obscure Naval officer from 70 years ago work? Well, Elliot Carlson/Danny Campbell find a way. A large portion of this book is dedicated to a detailed account (almost day by day) of code-breaking in the Pacific theater from mid-1941 to mid-1942 period, but it's not boring. Before and after those detailed accounts is the story of Joe Rochefort and his career's many highs and lows; a compelling story itself.

Obviously, this is a book meant for people with a high level of interest in WWII (like me) and I can't imagine my wife sitting through even 30 minutes of this book. However, even for someone who finds the stories from WWII compelling, this could have been TMI if not written with as much care and style.

Danny Campbell's reading is adequate. He does have an occasional inflection/emphasis issue when pronouncing certain words and names (e.g. "Rabaul" comes out as "ra-BOW-el"), but overall it does not detract from the story.

Finally, when writing a book about a somewhat controversial figure from this period, Carlson could have sided with Rochefort unilaterally to make his subject an absolute hero. Instead, he does a good job of balancing the account and provides a well researched and fair treatment of Rochefort and his primary adversaries, the Redman brothers.

This is a must have book for anyone interested in naval history or the Pacific theatre of WWII. President Reagan said if there was ever a battle involving tens of thousands of men whose result could be traceable to the work of one man, this would be it.

I first learned of Joe Rochefort when the film Midway was recently released. I became intrigued from the beginning to the end of the film and it's importance to our history. I asked myself, why haven't we heard more about this American Hero? This audio book reveals the reasons. Joe Rochefort's career is reveled in excellent detail and you will learn why unfortunately he has not been remembered as he should be. Joe and his team discovers how to read the Japanese code after the Pearl Harbor attack and successfully pinpoints Midway Island as a major target on June 4 1942. The interception & decryption of the Japanese Naval signal traffic code JN25 called Magic and it's original codes gives the United States a major success in the War in the Pacific. Captain Joseph Rochefort is a " mustang", which means he came up through the ranks without attending Annapolis Naval Academy. His extreme attitude towards his patriotic duties is covered from beginning to end. Joe is truly a war time hero that unfortunately was not recognized during his life for his commitment to our country. I believe this story needs to be told and retold so that it is not forgotten. Captain Joseph Rochefort's family received his honorary medals posthumously.

Glad Rochefort was on our side...

Outstanding research and fascinating story. As a retired officer, fluent in Japanese, and living on Oahu for 31 years now, I finally have the facts and can connect many dots. Thank you Elliot Carlson. It would be easier to listen, and give more credibility to the work, with a narration that consistently correctly pronounced Japanese and Hawaiian names, places and words...

What made the experience of listening to Joe Rochefort's War the most enjoyable?

Elliot makes the events interesting but I am not sure if a listener who is not interested in war history would not want to last the distance as some of the events can be drawn out. The history is very through and well referenced.

What other book might you compare Joe Rochefort's War to and why?

No other book has been so researched to the extent as this book.

Have you listened to any of Danny Campbell’s other performances before? How does this one compare?

Very topical and recent history to the Bush administration.

Well researched, crisp writing and engaging narration. The story of Joe Rochefort and his impact on WW2 is fantastic. The insights behind why he was lost to history are a powerful lesson in failed leadership.

Joe just wasn't as great as he thought he was...especially in the company of Nimitz. And ultimately his arrogance cost him a more promising naval career.

Knew some about Rochefort's story. He was well versed in what it took to lead Hypo. My biggest complaint, and it's a general one for most Audible books, is how bad all of the voice over presenters mispronounce Japanese words, specifically Yokosuka. its Yo Ko Ska, not Yo Ko Sooka.

Students of the Pacific war, especially the naval intelligence aspect of the war, will enjoy this book. Learned about the Navy's foresight in sending young officers before the conflict to Japan to learn the Japanese language.. Rochefort was one of them as was many of others who became crucial to the fight to come. Story on station Hippo's code breakers and his great talent as an Intelligence Analyst makes for compelling reading. Signal intelligence also plays a prominent role in the story. After he proved the Washington officers wrong about Midway, Redman brothers plus others forced Rochefort out at Hippo and sidelined him for most of the war outside his talents. Highly Recommend.

Well researched, neutral perspective and a fascinating piece of history. Former Defense Secretary James R Schlesinger made the argument that Rochefort’s genius and leadership was the singular factor in the US Navy’s winning plan for the battle of Midway. He went on to argue that the victory at Midway allowed the US to throw its military might at Germany which balanced Soviet control of Europe and set the stage for the Cold War defeat of global communism. By this logic Rochefort was the critical individual of the late 20th century. Don’t discount this theory until you’ve read this book. And I never knew the story of the bureaucratic jealousies that forced Rochefort to leave the code breaking team he created and led just 6 months after Midway.

Throws new light on the battle of Midway.

Joe Rochefort is a name well known to any student of the Battle of Midway and although some other aspects of his pre and post Midway career are well known a modern biography is long overdue. This book fills that gap very well indeed. It covers his life and navy career in detail and explains how he came to be in the position he was at the time of Midway. It also explains how although the intelligence work as a whole was a real team effort it was Rochefort's almost unique combination of skills and knowledge that pulled everything together into a functional whole. If you have an interest in Midway, you should definitely buy this book! The only downside (and it's a minor one) is the narrator, way to folksy in some places.