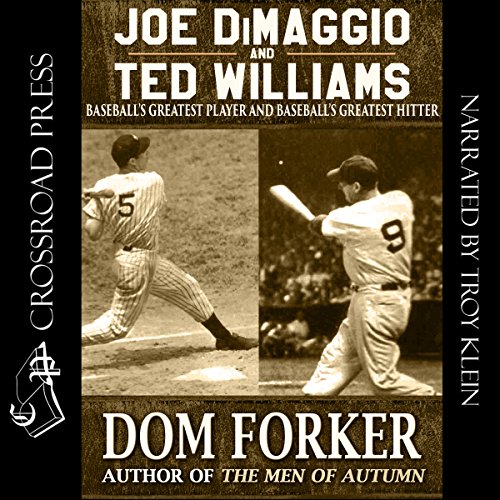 Joe should have batted .400 in 1939; Ted did hit .406 in 1941. Batting .412 in early September, the Clipper suffered a serious eye infection, and his average plummeted to 381, which was still 21 points higher than Jimmie Foxx, the runner-up hitter in the batting race.

The year 1941 was a mystical one in baseball history. DiMag hit safely in a record 56 consecutive games. During Joe's sensational run, Ted out hit him, .412 to .406. Unbelievably, at the All-Star Game, Joe's streak stood at 48 consecutive games, and Ted was batting .404. You can believe that they got the attention of the other stars that year.

The Kid hit the game-winning walk-off home run in the 1941 All-Star Game. In the 1946 Mid-summer Classic, he got four hits, including two home runs, one of them the first ever four-base blast off Rip Sewell's celebrated "eephus ball" pitch.

Early in 1947, co-owner Dan Topping of the Yankees and owner Tom Yawkey of the Red Sox agreed on an even-up trade of Joe for Ted. If it had been made, it would have altered baseball history considerably.

Joe and Ted were known for their gallant comebacks. In his last three years (1949-1951), the Clipper returned from either injury or illness to lead the Yankees to three consecutive world titles. In his last three games of the 1951 World Series, his final one, he batted .545 with one home run and five RBI. In his last major league at bat, he doubled off the right center field wall at Yankee Stadium.

What listeners say about Joe DiMaggio and Ted Williams

This was a good book about JD and TW and Baseball

I really enjoyed listening to this audiobook. It had a lot of neat information about Ted Williams and Joe DiMaggio that I didn't know as well as other players. The additional appendixes were really neat also. Records, milestones, conversations. I found it to be relaxing which is one of the reasons I love baseball.

I grew up watching baseball with my family and going to games and I enjoy it to this day. Baseball holds many fond memories of taking my kids to many games as well. We have my dad's ball cards and my dad visited Cooperstown often and also Cleveland and had some pictures taken with Bob Feller who was probably my dad's favorite pitcher.

If you like or love baseball, you'll enjoy this audiobook.

Troy Klein does a great job narrating this one. He's consistent and reads at a steady pace which is nice. He also had good voice inflections. It was as if he's talking straight to you. Overall super job.

Audiobook received in exchange for an unbiased review.