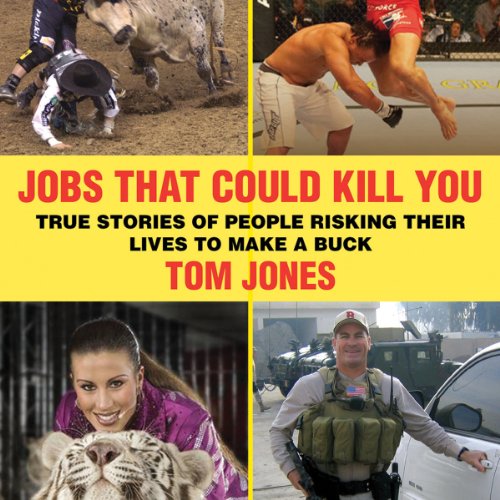 Jobs That Could Kill You

Jobs That Could Kill You

If you’re like most people, your job does not put you in the risk of serious injury or death on a daily business. But if you’re like author Tom Jones you might be interested in what attracts certain people to dangerous lines of work. Jones interviews a handpicked selection of risk-takers from a lion-tamer to a high-rise window washer. David Marantz uses his deep voice to perform these meetings with remarkable "adrenaline junkies" in the style of an exciting TV program. He growls the musings of these tough workers and their stories will amaze and excite. This audiobook allows the listener a chance to experience vicariously a visceral way of making a living without having to leave the comfort of their own home.

Insight into the lives of people who work on the edge.

Jobs That Could Kill You is a fascinating collection of candid and intimate conversations with 42 men and women who describe in gripping detail how physical risk is a familiar companion in their working lives, and how they deal with it. In the oral history tradition of Studs Terkel, Jobs That Could Kill You will introduce you to:

Jobs That Could Kill You reveals who these daring people are, what they will endure for a paycheck, and how they feel about their jobs. They speak for themselves, in their own words.

This book offered a glimpse of a wide variety of occupations that are indeed dangerous. The information came across as if transcribed verbatim from an oral description into a tape recorder by the job holder. I think the descriptions would have benefited if the author was able to dig deeper.