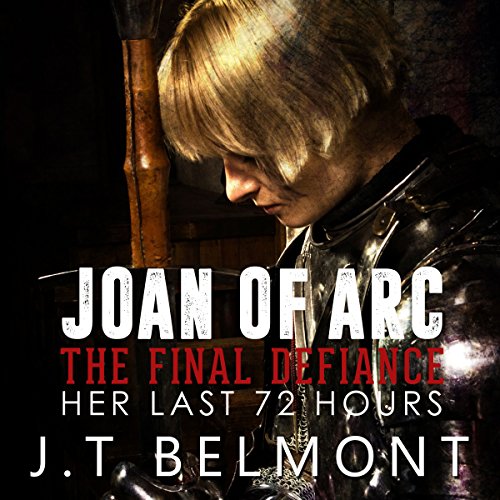 Joan of Arc: The Final Defiance

May 30, 1431: Joan of Arc will soon be burned at the stake. This is the story of the final 72 hours of Joan of Arc. The story is told in a compelling countdown up until Joan of Arc's head slumps forward and her innocent life is extinguished by the smoke that quickly fills her lungs as onlookers cheer.

The girl who led the English against the French in the One Hundred Years War, who hears voices of the saints and God himself, discovers she will burn at the stake, not for leading the French Armies against her English captors, not for heresy against the church, but for cross-dressing.

Despised by Bishop Cauchon, he lays out a legal case against Joan which is full of lies but no one goes against him. Most look forward to watching whom they believe is the devil woman burn at the stake. A guard she has befriended lays out an escape plan to free her but fate intervenes.

As the hours count down to Joan's final hours, she reminisces about her visions, those hard yet wonderful things that guided her life, and she wonders if they were all worth it as she is led to the courtyard and her final minutes of her life.

What were Joan's thoughts during her last 72 hours? What was behind Bishop Cauchon's motives to burn Joan? What were the thoughts of the guard and soldier that she had befriended during her last hours? How would her parents get past losing their daughter in a most horrific way? As the clock winds down, Joan must try to escape, or accept the fact that the voices knew what her fate was to be since the day she was born.

What listeners say about Joan of Arc: The Final Defiance