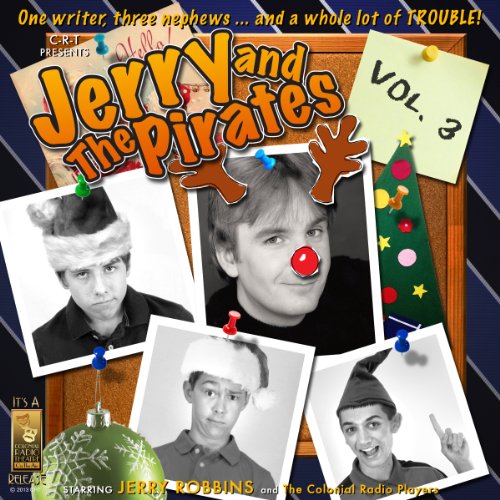 Jerry and the Pirates, Volume 3

Set in the lovely seacoast town of Marblehead, Massachusetts, Jerry and the Pirates is CRT's homage to the classic TV sitcoms of the 60s and 70s (complete with the ill-timed laugh track). Jerry Robbins stars as Jerry Davenport, a motion picture screenwriter who has left Hollywood for the quiet serenity of the craggy shores of the east coast. That serenity is soon shattered with the arrival of this three nephews, played by Rob Cattell, Connor Doherty, and Ricky MacDonald. Co-Starring CRT favorites Diane Capen, Lincoln Clark, Marcia Friedman, and J.T. Turner. Originally broadcast on Sirius XM Book Radio, Jerry and the Pirates is a good old fashioned comedy the entire family will enjoy.

What listeners say about Jerry and the Pirates, Volume 3

Jerry and the pirates could have a little better story to go by, but other than that I LOVED everything else in the story. I always loved a good comedy 👍🏻