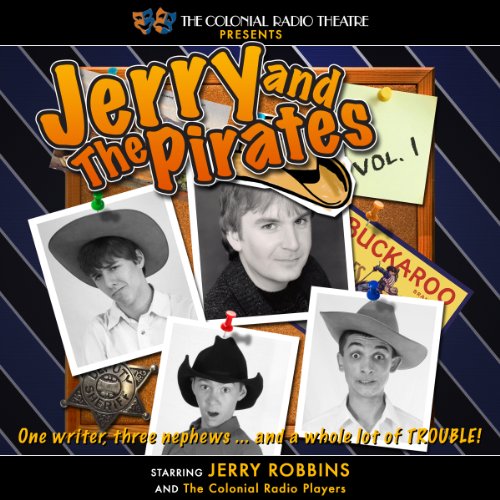 Jerry and the Pirates, Vol. 1

Set in the lovely seacoast town of Marblehead Massachusetts, Jerry and the Pirates is CRT's homage to the classic TV sitcoms of the 60's and 70's (complete with the ill-timed laugh track). Jerry Robbins stars as Jerry Davenport, a motion picture screenwriter who has left Hollywood for the quiet serenity of the craggy shores of the east coast. That serenity is soon shattered with the arrival of his three nephews, played by Rob Cattell, Connor Doherty, and Ricky MacDonald. Co-Starring CRT favorites Diane Capen, Lincoln Clark, Marcia Friedman, and J.T. Turner. Originally broadcast on Sirius XM Book Radio, Jerry and the Pirates is a good old fashioned comedy the entire family will enjoy.

Ep. 01: "SHIVER THE TIMBERS:" While rushing to complete a script on a deadline, Jerry's three nephews arrive unexpectedly. Ep. 02: "EVERYTHING'S COMING UP PETUNIAS:" When Jerry refuses to write a speech for Mayor Quigley to give at the Petunia Lovers of America Convention, the kids write the speech and deliver it to the Mayor in Jerry's name - hoping the Mayor will allow them ride their four-wheelers on his property. Ep. 03: "THE HOUSEKEEPER COMETH:" It's Mrs. Thorns first day on the job, and she causes some ripples with the household schedule. Ep. 04: "THE HORN BLOWS AT MIDNIGHT:" Richie takes trombone lessons in hopes of joining the marching band at school. Ep. 05: "BUILDING RAMPS:" Richie builds several ramps in the back yard for his four wheeler. All is well until they hit metal, and think they may have found some buried treasure. Ep. 06: "GUNFIGHT AT THE OKEY-DOKEY CORRAL:" Jerry is writing a western, and Preston wants to go pumpkin picking. Preston takes over the script writing to hurry things along.

What listeners say about Jerry and the Pirates, Vol. 1